Disabled rights activist, actor and journalist was a brilliant campaigner 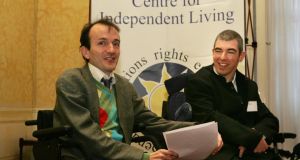 Dónal Toolan, a passionate campaigner for the rights of disabled people and a talented actor, presenter and journalist, has died aged 50. A gifted speaker and organiser across a range of issues and disciplines, he worked tirelessly and courageously, nationally and internationally, for just and equal treatment.

“He used his immense talents with shameless panache, enriched our lives both on and off stage, and provided invaluable witness to human indomitabilityand human frailty in one greatly lived life,” said his long-time friend Prof Donncha O’Connell in a funeral eulogy.

Dónal grew up with his six siblings in Knockanara, near Ballyhaunis, Co Mayo, on a small farm run by his father Jacky and mother Rita (Margaret) Finn. At a time when it was uncommon for disabled children to be included, he attended his local school in Logboy. School friend Kevin McGuire said there were many steps up to the main classroom entrance and neighbours used to lift Dónal up those steps for a number of years; he and others campaigned for a wheelchair-access ramp to be built and it was. “It is perhaps this early experience that instilled in Dónal his campaigning spirit,” said McGuire.

“Even at a very young age, he was aware of the absurdity of being provided with a lot of exercise equipment (to try to maintain his ability to walk) that was accommodated in a shed across a mucky yard, while the need for a single ramp into the family home was overlooked,” said his close friend Mary Duffy.

During schooling at Logboy and Ballyhaunis Community School, he spent long periods in the National Medical Rehabilitation Hospital. At 12, he decided himself to give up the struggle with callipers and crutches in preference for a wheelchair.

Bravely but characteristically, he moved from rural Mayo to urban Dublin after secondary school. Quite quickly, his life changed as he became a student at Trinity College while working part-time on RTÉ’s first radio programme for people with disabilities presented by a disabled person, Not So Different. He lived in rooms at Trinity and studied history; although he didn’t complete his degree, he considered the experience invaluable.

Playwright Stuart Carolan, a classmate, said: “He was a mature student at 21 and seemed to be impossibly handsome, suave, worldly wise and dynamic. Even then, life was a juggling act of work, activism and acting. All my memories of Dónal involve laughter, mischief and devilment, organising, agitating, interviewing and wondering where the next party was on.”

Through his radio work, he became aware of the need for a forum of people with disabilities to agitate for change. In 1990, the Forum of People with Disabilities was launched and one of its first campaigns was to challenge the legislation that required disabled voters who couldn’t access the voting booth to be medically declared “sane and capable of comprehending the process of voting” before they could cast their vote. During the 1990 presidential campaign, he was instrumental in inviting the candidates to be the first signatures of a petition to have this law changed. Mary Robinson was the only candidate to avail of the offer and she afterwards appointed him to the Council of State; at 25, he was the youngest ever appointee.

He proved an adept and brilliant campaigner. “What he disliked was the disempowerment of having to depend on the discretion of others and the undermining of one’s innate sense of human dignity which, in his case, was so natural,” said Donncha O’Connell. “Even in the most dysfunctional bureaucratic superstructure, he could identify ‘the good ones’ and work on them to improve things from within without ever giving up the imperative of radical and systemic change.”

In 1993, he was awarded National Broadcast Journalist of the Year and also received a Jacob’s Award for his work on the RTÉ television documentary series, In from the Margins. Among his many other roles, he was a negotiator for the Commission on the Status of People with Disabilities, an observer at the drafting of the UN Convention on the Rights of Persons with Disabilities, a member of the Disability Act advisory group and a board member of the Irish Council for Civil Liberties.

His acting career spanned many years. He wrote and performed the one-man play, Broadcast, at the Dublin Fringe (2003), acted in the Graeae Theatre Company’s version of Bent in Dublin and London (2004) and, despite ill-health, performed in Rosaleen McDonagh’s play Mainstream before Christmas, in a role especially created for him.

His warmth, capacity for friendship and great sense of fun was evident. He was a brilliant mimic and could morph into Mary Robinson, David Norris, President Michael D Higgins, Terry Prone and Gay Byrne effortlessly.

Martin Naughton, who died last October, was his great comrade and fellow campaigner and their influence will endure long beyond their lives. He is survived by his siblings James, John, Brendan, Mary, Marguerite and Noreen, brothers-in-law, sister-in-law, nieces and nephews.

Takeaway kebab at home: this chicken shish is delish
9