No wasters: how to repair a throwaway culture

Ireland’s second Repair Cafe will take place at the end of the month, and companies that are trying to reduce our excessive production of waste are popping up all over 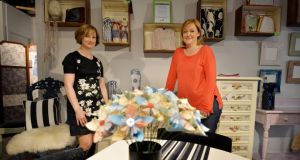 At the Community Reuse Network Ireland pop-up shop on Dame Lane, Dublin, which sells upcycled goods, are the network’s Joanne Rourke, and Sarah Miller of the Rediscovery Centre in Ballymun. Photograph: Alan Betson

Years ago our parents kept bits of string and paper bags, and had a shed full of stuff that “might come in handy”. My grandmother would rip back a jumper with holes in the elbows to reknit it. The ancient Scrabble set given to us was held together with a piece of elastic – from my uncle’s Y-fronts.

Once again, people are discovering how satisfying it is to repair instead of buying new. Ireland’s second Repair Cafe takes place on June 28th in Sandymount, Dublin 4. The idea is that people bring what needs fixing (clothes, bikes, furniture, electrical goods, and so on) and learn how to repair them. A team of volunteers will help guide novices through the process. Tea, coffee and cakes will help smooth knitted brows.

“It’s really to bring back the culture of repair,” says Claire Downey, who came across the idea in the Netherlands. She works in the waste-management industry, and has “always been really interested in what you can do in waste prevention and reuse”. She says the cafe can show people how easy it is to repair, and can help them “to reconnect with the things we own, to value our possessions more”. The older volunteers enjoy passing their knowledge and skills on to a younger set.

At the first repair cafe, in March, one woman brought in a lamp given to her by her brother. It had stopped working the year he died. “It obviously had a lot of sentimental value,” says Downey.

Tog, a collaborative makers’ space or “hackerspace” based in an old warehouse on Chancery Lane in Dublin, will help out at the cafe. Tog shares knowledge and tools in everything from 3D printing to knitting. One of its innovations is the Twitter Knitter, whereby Becky Yates, a software engineer, has repurposed a 45-year-old knitting machine to knit tweets.

Next door to Tog is a marketing company, and Tog members love scavenging from its waste. One find was a quantity of rubber ducks, which have been fashioned into a Duck Matrix display. “We’re terrible for puns in this place,” says Tríona O’Connell, part of Tog and a PhD research scientist at Dublin City University.

Come on down to Jumbletown

Jumbletown.ie was started by brothers Des and David Fitzgibbon eight years ago to divert waste from landfill. It has an upcycling section, where people show and explain what they have done with items that were given away for free. Members are very encouraging of one another.

Before and after photos show the talent that is out there: examples include an old sofa re-upholstered in orange fake fur and embellished with flowers, and an old trampoline that has been converted into a polytunnel.

Des, a former geography teacher, says Ireland’s bad reputation for producing excessive amounts of waste was a motivating factor behind the website. He cites a 2006 OECD report that showed Ireland was producing more waste per capita than any other developed country, including the United States.

When Melissa Byrne, from Portarlington, Co Laois, was ill a few years ago, Jumbletown “really kept me going – it’s a real little community”. She renovated a rocking chair while pregnant to give it a quirky, retro look. “You can look at what other people have done and see what’s possible,” she says.

Before this she never would have considered looking into a skip. Now she will happily ask permission to remove some item that looks promising. “My husband really worries about what I’m going to do next.”

Another Jumbletown member says that “so many people have been left with so little after what’s happened in this country. People are going out and buying a whole lot of junk,” she says, talking about buying sprayed MDF instead of repurposing older, better-made pieces of furniture.

Often, sanding and a coat of paint are all that’s required. Such materials can be sourced at the Rediscovery Centre in Ballymun, Dublin. The centre has recently been awarded €3.6 million under the EU Life programme to expand its social enterprise and educational activities. One of the projects offers recycled paint, which can be blended to your colour requirements. Membership costs €30 for up to 50 litres of paint.

The centre also runs an array of projects, including the Sew Green Academy. Liz Larkin, of Poppintree, had a sewing machine in her attic but had no idea how to use it. After a few courses she was ready to make a coat, in pink and grey wool, “which might have been a rug”, and grey velvet trimming donated to the Rediscovery Centre. The only cost was €25 for some good-quality lining.

She has been “bitten by the bug” and is more aware now of the costs – human and environmental – of the way clothes are made. “I get so many compliments about it,” she says of her coat. “I’m very proud to say I made it.”

Other upcycling resources include Lynn Haughton’s website Theupcyclemovement.com; and Freetradeireland.ie, a site that sees up to 800 items pass through it per month. The latter has been used to give away a mobile home in Donegal and several pianos. It specialises in larger items the charity shops don’t have room for, and in less than four years has found a new home for more than 54,200 items.

ReCreate, in Walkinstown, diverts end-of-line materials from landfill, providing creches, schools, community groups and families with art materials. Members pay from €60 to €250 per year for as much as they can use of items including woolly offcuts from Avoca Handweavers, Bewley’s hessian coffee sacks, mosaic tiles, coloured bubble wrap and corrugated plastic tubing. “The shrieks of joy we get at this place just makes me feel so good – you know you’re doing something right,” says Dara Connolly, who estimates it saves schools up to €1,500 per year. It works for businesses, too, he says: “Bewley’s is a perfect example. Once they got on board, they changed their production process to embrace reuse.”

Busybees Furniture not only upcycles and resells second-hand furniture but also provides a removal service for unwanted household furniture in good condition. And even old mattresses are recycled at Eco Mattress Recycling in Glasnevin.

At the Fumbally Exchange, on Dame Lane in Dublin 2, a pop-up shop sells upcycled products made by members of the Community Reuse Network Ireland. One of the network’s members is Smile Resource Exchange, which links businesses with unwanted items to others that have use for them, for example a Cork company that recycles car tyres and a company in Coleraine that makes mattresses for cows, helping to increase milk yield.

“The aim is to turn people on to the potential and possibilities of reusing items,” says the group’s co-ordinator, Joanne Rourke. “Reuse is more environmentally friendly than recycling – it prevents perfectly good materials from going to landfill, it reduces the extraction of precious natural resources, and it makes us rethink our priorities and actions as consumers.”