‘We have never been refused help in Ireland’

New to the Parish: Zsuzsanna Rékai from Hungary says Ireland will always be home 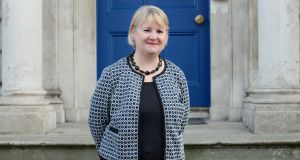 Zsuzsanna Bothné Rékai from Hungary: “It was difficult at the start because there were only about 10 Hungarians living in Cork at the time.” Photograph: Alan Betson

In February 2004, when Zsuzsanna Bothné Rékai’s son Mark was born, he immediately became an Irish citizen. Had he been born four months later, Mark would not have been recognised as Irish following the results of the citizenship referendum. His parents, who had been living in Ireland for nearly six years at the time of his birth, held Hungarian passports.

“He was born in 2004, the year Hungary got into the European Union, ” she recalls. “It’s funny that because he was born in February he automatically got Irish citizenship but a few months later they couldn’t give out citizenship that way any more. When we brought him home to Hungary when he was three months old, he had an Irish passport but we had the Hungarian one and of course there were different queues to pass through migration.”

At the time of her son’s birth, she says, Irish citizenship didn’t feel particularly important. However, as the years went by, she and her husband realised an Irish passport would make travel outside the EU a lot easier. “We said if our son has dual citizenship, how does it look that he’s got dual and we are only Hungarian? I also wanted to go back to the US or maybe visit New Zealand, and with Irish citizenship you get 90 days in the US. With a Hungarian passport you don’t have that.”

Rékai was 18 the first time she visited the United States. Shortly after completing her final-year school exams in 1989, the opportunity came up to spend two years with family in Florida. “As an only child who had never left their country before, it was such a huge thing. With all the changes after 1989, people were really open to everything. But I was quite scared because I had no English. But after a few months I was fluent. In those two years I didn’t really use much Hungarian. I actually had to look for the Hungarian words in my mind when I returned.

“I’ll never forget those two years because they somehow changed my personality and really opened my eyes to the world. Even today, my parents say ‘if you didn’t go to the US you probably wouldn’t actually be living in Ireland now’.”

Eager to continue speaking English, Rékai studied to become a language teacher at university and began teaching in Budapest after graduation. “I knew straight away I had to do something with English because I loved the language. Those three years before moving to Ireland were the happiest. I just love teaching and loved working with kids.”

In 1998, Rékai’s husband, who is also from Budapest, was offered a job with a multinational company in Cork, and in August that year they moved to Ireland. Rékai took a postgraduate course in information technology at Cork College of Commerce before finding a job as a receptionist in a hotel.

“It was difficult at the start because there were only about 10 Hungarians living in Cork at the time. To be honest, I was quite homesick and my husband and I depended on each other very much. It felt like something was missing in my life.”

The couple eventually began to settle after they bought a home in Cobh in 2000. “We met a lot of Irish people through the neighbourhood. Everyone bought their houses at the same time, we got pregnant at the same time, our kids grew up together, the whole world opened up.”

After she gave birth to Mark, and as she watched her son grow up in Ireland, Rékai began to worry about his connection with Hungary. “I could talk to him in Hungarian and we used Hungarian at home but that’s a very limited vocab. It’s ‘There’s your lunch’ and ‘Wash your hands’. These are more instructions instead of actually talking about Hungarian literature. I worried that he would grow up without knowing anything about our culture and felt I needed to do something about it. I had the urge but I didn’t have the ambition.”

The ambition to make this change happen appeared in the form of a chance encounter with another Hungarian woman at a May Day celebration on Little Island in Cork in 2010. By that evening, Rékai found herself sitting in a coffee shop with her new friends planning the launch of a Hungarian school.

In September 2010 the Hungarian Sunday school and kindergarten opened its doors to a handful of students offering language and cultural classes. Nine years on the school continues to grow with 45 students aged three to 14 attending on a weekly basis. Keeping the school running has often been a struggle, particularly when it comes to finding a premises to hold the weekend sessions. The school has moved three times and currently runs the classes from a secondary school in Cork city.

Rékai is very grateful for the support and funding the school has received but warns that many other migrant initiatives around the country are in real need of financial support. “What I can see from the last 20 years here is that more and more people are coming to Ireland from different countries, but if they want to set up a school, there’s nothing for them. I’m not only talking about funding but more community spaces for different nationalities.”

In December 2018 she was awarded the Hungarian gold cross of merit for her efforts with the Hungarian school. She feels real pride in her work and likes that new Hungarian arrivals feel they can turn to her for advice and guidance. “When I moved to Ireland I was helpless, and the only place I could contact for advice was the embassy. I love helping out because I can see these vulnerable families. It’s not only teaching we’re doing, it’s building a community to have a strong relationship between Hungarians and also with the Irish.”

She and her husband would like to move back to Hungary when they retire, but for now they’re happy in Ireland. “When we retire in 25 years we’re planning to go back but at the same time. Ireland will always be our home. It’s where we’ve spent most of our time and we get so much from the Irish. If ever we’ve needed anything, whenever we meet someone in the local area, they will always help. They will never refuse us.”