‘We grew up in Brazil. Now our son speaks to me in Irish’

Tarsila Kruse sold everything she had in Brazil, packed a bag and flew to Ireland in 2007 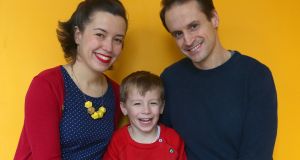 Tarsila Kruse with her husband Eric Valverde and her son Otto, aged 5, pictured at their home in Donnycarney. Photograph: Damien Eagers/The Irish Times

Tarsila Kruse loved drawing as a child but never believed she could make a career out of it. Growing up she would trace the drawings of her two closest friends before redesigning the characters’ outfits and hairstyles.

“They could both draw like nobody’s business, and I really admired them. They didn’t mind that I copied what they did; it’s how my interest in drawing really developed. But there was always somebody else better than me so I thought it wasn’t really worth pursuing art. Because I was really good at English I thought I’ll do that instead.”

Born and brought up in Sao Paulo, Kruse moved to New Hampshire in the United States when she was 17 to develop her English language skills.

“When you go abroad for the first time you have this completely new cultural experience and realise that people live differently and see the world in a different way. And when you speak a different language that informs so much of your thinking and you view of the world.”

“That kind of experience on your own really changes a person. After I came back I decided that that for certain I would leave Brazil at some stage.”

Upon her return, Kruse began a bachelor’s degree in Portuguese and English literature while also teaching English as a second language. On her father’s advice, she began simultaneously studying a second degree in multimedia design.

“In Brazil you can attend university at night so your lessons would start at about 6pm and end at 11pm. I did the two degrees together but then had a bit of a meltdown at the end of the first year. But I persevered and got through.”

'We sold everything we had – shoes, clothes, our motorbikes. We scraped together about €2,000 each, packed a medium-sized bag and flew to Ireland'

It was during the multimedia night classes that Kruse met her now husband Eric. After graduation the couple decided to move abroad for a while. “We had been looking at buying a house in Sao Paulo but knew we couldn’t get the money together for the mortgage. Also, if we did buy a house we’d be stuck there for 30 years.”

As she had started learning German, Kruse suggested the couple move to Germany but Eric wanted to try an English-speaking country. On the advice of a travel agent, they decided to go to Ireland.

“We sold everything we had – shoes, clothes, our motorbikes. We scraped together about €2,000 each, packed a medium-sized bag and flew to Ireland.”

The couple arrived in Dublin on a grey March afternoon in 2007. Having travelled to Europe on student visas, they both had to attend English-language classes five days a week, something Kruse, who was already fluent in the language, found tiresome.

Eric had already secured a job with a tech company through an online Skype interview and started working straight, away while Kruse found work as a graphic designer after following up on an advertisement she spotted in the now defunct daily Metro Herald paper.

“The job was actually to design Irish souvenirs – there were mugs, chocolate tins, pencils, key-rings. They were the main supplier for Carroll’s gift ship so I was designing every type of souvenir that has a leprechaun or a sheep on it. I never thought I could make money with my drawing, and this was the first job that actually said my skills were valuable.”

Kruse spent a year in the job before re-training as an English language teacher. Shortly before leaving the position she designed two chocolate tins which, 13 years later, are still on sale in Carroll’s gift shops.

In 2011, the couple decided they would stay in Ireland. “Before that we had always considered going back to Brazil so we never planted roots. We needed to settle our lives, were we going to have a child? We knew that despite its challenges, life here would be better than back in Brazil.”

Kruse had already started taking courses in illustration and soon discovered a passion for illustrating children’s books. While continuing to make money through translation work, she tried developing these illustration skills but struggled to enter the market.

When Kruse became pregnant she had to put her work on hold, and in 2014 her son Otto was born. A month after his birth the couple’s landlord requested that they move out and shortly afterwards Eric was made redundant.

'People have always been very open to us, it’s never like you’re a foreigner, you’re not allowed to speak our language. They really encourage us'

“It was one of the hardest years of our life. To me that time is a blur. I had post-natal depression and hated everything. Eric found a job within a month but had to work from home for a year and that was a nightmare for him because he needs the structure of an office. He eventually switched companies to where he is now.”

Six months after Otto was born Kruse received an email from Irish language publisher Futa Fata looking for an illustrator for a new children’s book. After sending some sketches over, Kruse was offered the job and started working each night from 8pm-2am while Eric looked after the baby.

Ná Gabh ar Scoil was published in 2015 and has since been translated from Irish into six different languages. Kruse has gone on to illustrate a number of Irish and English-language children’s books and most recently illustrated the cover of the 2019 Christmas edition of the RTÉ guide.

“I was so welcomed into this world of Irish books that I didn’t know existed before. I discovered there were all these gaeilgeoirí that really speak Irish. You hear from a lot of people ‘ah, sure no one speaks Irish’ but so many people actually speak it.

Kruse is now learning Irish and last year enrolled Otto in a newly established Gaelscoil in Drumcondra. “We grew up in a country that is very inclusive because Brazil is a melting pot of cultures. So we wanted Otto to go to a mixed, multi-denominational school, and Irish would be an extra bonus.”

“Otto started in September with no Irish whatsoever, but now he sings in Irish and speaks to me in Irish. I kind of understand what he’s saying but can’t reply yet. He comes to me and says ‘ba mhaith liom bainne le do thoil’ and I’m so proud of him.”

The couple also recently bought a house in north Dublin. “Getting the keys was a big milestone for us, it’s definite proof that we’ve settled here. And being accepted into the gaeilgeoir community, you cannot get more Irish than that.

“People have always been very open to us, it’s never like you’re a foreigner, you’re not allowed to speak our language. They really encourage us.”