‘Watching my children grow from Ireland has been really tough’

New to the Parish: Irene Jagoba, a carer, hasn’t seen her son and daughter for 12 years 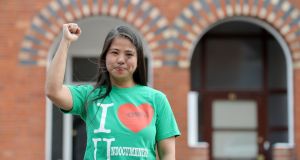 Irene Jagoba is an active member of the Migrant Rights Centre of Ireland, campaigning on behalf of undocumented migrants in Ireland. Photograph: Alan Betson

When Irene Jagoba moved to Ireland in January 2008, she only planned to spend six months in the country. Leaving behind her two small children with their father in the Philippines, she arrived in Dublin on a three-month tourist visa with a view to sending money home.

Her sister, who had previously moved to Ireland, had arranged for her younger sister to look after three children in a private home in Co Meath. When Jagoba mentioned she only had legal status for the three months, she says the employer advised her not to talk about it.

“My sister also recommended that I needed to stay quiet. It was really tough knowing I was living within restrictions. Once the visa had expired the fear started.”

After six months, and with the family eager to keep her on as a childminder, Jagoba chose to remain in Ireland another year. She continued sending remittances back to the Philippines while also trying to save money to restart her business, which had fallen apart shortly after her son was born.

Jagoba was initially told by doctors that her son, diagnosed at birth with a congenital heart disease, would only survive one week. He went on to spend the first eight months of his life in hospital.

Jagoba’s husband worked abroad in Brunei and her aunt and uncle – who raised her after her parents died when she was a child – had moved to Canada.

“It was really tough knowing there was no family there to help me. I was really on my own, I survived by myself.”

Determined to ensure her son survived, Jagoba used every penny she had saved through her party shop business to pay for medical bills.

“I said, as long as my son is breathing and fighting I’m going to fight with him. He was skin and bone and needed to gain weight before an operation. I couldn’t run the business at the same time; we ended up with nearly nothing left. We had to move to Manila because the care wasn’t good enough in Lucena, but then we had to move to public hospital because I was nearly out of money.”

Once her son was released from hospital, Jagoba struggled to support her children financially. Eventually, on the advice of her sister, she decided to move to Ireland for a few months and asked that her husband return from Brunei to look after the children.

“I spent what was left of my money on a ventilator and turned my little boy’s bedroom into a mini clinic. It was a really tough decision leaving. I kept asking myself was I being selfish, but then I’d remind myself I was doing this for his medical care.”

One year in Ireland turned into two and before Jagoba realised it seven years had passed caring for the same family. She decided to move to Dublin where she could work as a childminder but also hold down a second or even third job to save more money for her family. Around the same time she was introduced to the work of the Migrant Rights Centre of Ireland (MRCI).

“I discovered they had a campaign for justice for the undocumented [JFU] and I started to meet people in the same situation as me. There was a very active JFU leader who said she believed in me and wanted me to become a leader. I began attending meetings and started to trust what MRCI could do for people. I realised we had a common goal, which was regularisation.”

After a few years working with the movement, Jagoba eventually decided to speak publicly about her experience as an undocumented woman. She was conscious of the large number of undocumented workers caring for the elderly and wanted to highlight the important work they were doing for the Irish people.

“We care for the elderly and children – many Irish families could not function without us. The family I work with now, the mother always says I’m a fundamental member of their family and that she knows her son is in good hands.”

Jagoba finds the annual St Patrick’s Day State visit to the US – when the Taoiseach highlights the challenges faced by the Irish undocumented during his visit to the White House – particularly frustrating.

“There are people in exactly the same situation right here in Ireland. We’re just like the Irish in the US. Whatever their reason is for staying in the US, that’s the exactly the same reason we stay here to work. We work for our families and for a better life.”

A number of political parties, including Labour, the Social Democrats and the Green Party, committed to a regularisation scheme for the undocumented as part of their 2020 election manifestos. Fine Gael said it would work with NGOs to identify “appropriate legal pathways” to help young undocumented people regularise their status.

“Regularisation is the smart thing to do and it could change thousands of lives and help the economy to recover after the coronavirus. We want to help in the recovery by paying taxes and contributing fully.”

As Jagoba does not have legal status in Ireland, she has not been able to visit her children in 12 years. Her daughter recently graduated from university and her son is nearly 15.

“Watching my children grow from afar has been really tough. They often ask me to go home and there are times they say we need our mum, not money. I always explain I’m doing this for them. I asked them once if they wanted to come live here and they said no.”

If she succeeds in regularising her immigration status, the first thing Jagoba plans to do is to visit her children. However, she also plans to return to Ireland after the visit. After 12 years here, she’s built a strong connection with Ireland’s people and culture. She is a core member of MRCI and wants to continue campaigning for the rights of the estimated 17,000-20,000 undocumented people in Ireland. Meanwhile, she continues working as a childminder, cleaner, balloon artist and marketing manager with a property company.

“My hope for the future is to get regularisation and come out from the shadows. Since I spoke publicly and showed my face a lot more people have also spoken out. We know there is hope.”