New to the Parish: Daniela Vindisova from Slovakia came to Ireland in 2016 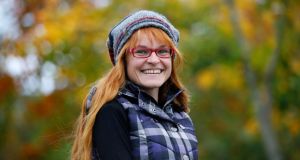 Daniela Vindisova: “It feels good here. I have never felt like I’m in some kind of minority.” Photograph: Nick Bradshaw

Daniela Vindisova was just 17 when she first left her home in eastern Slovakia to go to college in Bratislava.

She speaks five languages and has lived in four different countries in the 10 years since then, learning not to get too attached to anywhere.

She is 28 now, living in Ashtown, Dublin 15, and working in Blanchardstown, with no immediate plans to return to her hometown.

The village where she grew up in eastern Slovakia has only 300 inhabitants and “it’s kind of like everybody knows everybody”, she says.

Her primary school was quite small, and although she is still in touch with her best friend from school, they rarely see each other now as she is in Canada and Vindisova in Ireland.

When I moved to Ireland it wasn’t the first time I had to pack boxes and just ship them somewhere, but I think it has trained me not to get too attached to things

That said, many of her classmates have stayed in Slovakia, and others who have left are planning on returning. “I think they were like 30 of us in the class and as far as I know only three of us are out [emigrated] and most of them are planning on coming back actually.

“I’m on this site, it’s called Slovaks in Ireland on Facebook and I see that actually many people are going back now,” she says.

Most of the work, however, is in the western capital of Bratislava, which is about 400km away from Presov – the city closest to her hometown. She explains that Bratislava is a much different environment to the eastern city of Presov.

“Bratislava is only 70km away from Vienna so you’re in the West . . . I think that in their hearts they’re all the same but I think the people from Bratislava like to think that there’s a big difference because they like to look a bit better or whatever.”

Settled in Ireland, Vindisova is not married to the idea of home, and says she is happy where she is in life. “I don’t exclude the option of going back there but right now I think I’m doing very well where I am.

“Basically I left home when I was 17, so since then I haven’t really thought of home the same way any more.”

Vindisova had her first experience of travelling at 18, when she spent a summer babysitting for a family in Italy, using the language she had learned in school and which she was studying at university. “I was quite hesitant about it at first,” she says, but her mother encouraged her.

“It was actually my mom who goes ‘agh, what will you be doing at home anyways – just go!’ so in a few days I bought a ticket and I went by bus – it took about 24 hours to get to Florence.”

She was apprehensive about being able to speak Italian to the three-year-old she would be minding, but it worked out so well she returned for a second summer. “I’m very thankful because it was a great experience – I learned their language and their culture and they never looked down on me, they took me as an equal.

“Thanks to them, I’ve seen many places in Italy that otherwise I wouldn’t have seen. That was priceless,” she says of the Italian family she babysat for.

The experience also forged Vindisova’s love of travelling and ability to call anywhere home. “It taught me that I can create a home for myself anywhere . . . To me, it was no problem to call their house ‘home’,” she says.

Her next stop would be Sweden, where she went to live after finishing her Italian degree in Bratislava.

Her boyfriend at the time was living in Sweden, and her college was not running the masters year of her course, which she felt was a sign.

“I had nothing going on so I moved to Sweden. I really just packed bags,” she says, moving to northern Europe without the language and with no idea of what she might do there.

“I’m not going to lie, it was much harder than I had expected,” she says, describing the long wait for a social security number which would allow her to attend school and learn Swedish, an essential tool for getting a job there.

In the end, she decided to teach herself the language by downloading online books and lessons and ended up teaching Swedish to other immigrants like herself.

After 2½ years, when her relationship with her boyfriend broke down, she decided it was time to leave. “I didn’t really want to be a teacher – it was stressful teaching a language that wasn’t your mother tongue.

“The job opportunities weren’t that vast in the small town we were living in. I had studied cultural studies at college as well and when I interviewed for jobs like this I don’t think anybody even had a look [at me] to be honest.

“Some people advised me to look for a job as a cleaner – and I thought, I have all the respect for these kinds of jobs, but I didn’t invest all this money in studying to be a cleaner and not even try work in my industry.

I wish Dublin Bus was better. It was one of the reasons I looked for a job close to where I live, so that I could cycle, because it’s very difficult to get around

“I hear that many people in Sweden have to work tonnes of part-time jobs in the beginning because it’s extremely difficult for a young person to get a permanent position,” she says.

Vindisova returned home to Slovakia and worked in the order management section of a company in Bratislava, which ended up offering her a position in its Irish plant, based in Dublin – and she took it.

“It feels good here. I have never felt like I’m in some kind of minority here [in Ireland] – she enjoys the Irish coastline, something she never had in Slovakia, and takes regular trips outside the capital to enjoy the Irish scenery.

“In Slovakia, because we don’t have any seaside, I never wanted to eat fish, but since I came here I’ve been eating it a lot.”

The worst part about living in Ireland?

“I wish Dublin Bus was better! It was one of the reasons I looked for a job close to where I live, so that I could cycle, because it’s very difficult to get around.”

When Vindisova first came to Ireland, she feared it would be a very secluded place, with little transport links to the outside world – but she has been pleasantly surprised. “The plane connections are so good here – I don’t feel that way at all now.”

She makes good use of Dublin Airport, it seems, going abroad four times this year alone – “Yeah, I love holidays!” she says.

Although she has no plans to leave Ireland anytime soon, she wouldn’t hesitate moving if her boyfriend was on board.

“When I moved to Ireland it wasn’t the first time I had to pack boxes and just ship them somewhere, but I think it has trained me not to get too attached to things and stay realistic.

“It means I can do a reality check, like I did in Sweden, and say okay this most likely isn’t the future for me, I cannot continue doing this – okay I have to pack and I have to go. It has taught me that I cannot just sit on my ass and continue to feel sorry for myself.”