‘The Irish people gave me justice, liberty, humanity and support’

New to the Parish: Osama Abou Hajar arrived from Syria via Lebanon in 2014 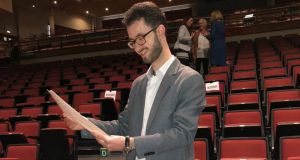 Osama Abou Hajar recently got Irish citizenship. He is pictured with his newly signed document.

On May 21st, 2018, Osama Abou Hajar stood on the stage of the Killarney Convention Centre in Co Kerry and was handed a piece of paper confirming his new status as a citizen of Ireland. A few hours after the ceremony, the Syrian student posted on his Facebook page that he was “proud to be one of the Irish people”. “For four years the Irish people and the Irish Government have given me justice, liberty, humanity and a lot of support to re-build my life. And now it’s my time to give back and work for my new home; the home I have chosen to live in, the home which I will be so proud to represent in its culture and traditions for the rest of my life.”

Exactly four years ago, Abou Hajar, his parents and siblings arrived in Ireland from Lebanon as UNHCR-sponsored refugees seeking stability after years of turbulence and violence. The family had been forced to leave their hometown of Al Ma’arra in north-western Syria in 2012 and after temporarily seeking shelter in another part of the country, eventually travelled to Beirut. Abou Hajar and his brother followed the family to Lebanon in 2013 and the following year they boarded a flight to Dublin.

“When I was stepping on that plane I asked my mum to pinch me on the shoulder,” remembers Abou Hajar. “I couldn’t believe it, it didn’t feel real. I finally would have a chance to finish my studies and my sister could go back to school.”

The family spent their first nine months in the Balseskin direct provision centre in Finglas, Dublin, before being relocated to a house in Portlaoise. A former engineering student, Abou Hajar was determined to find a way back into third-level education and spent those initial months researching colleges and contacting course coordinators. He sent his Syrian qualifications to UCD and DCU in the hopes they would accept him into one of their engineering courses. However, he was refused and told he needed to wait three years before he would be eligible for a student grant. He then turned his attention to learning English.

“I basically had no spoken English. To be honest, living in the hostel wasn’t too bad because I met people from loads of different countries and they all had different English accents. Dealing with all those different cultures taught me a lot about speaking the language.”

Soon after arriving in Portlaoise, Abou Hajar was advised to apply to the Higher Education Authority’s free Springboard courses and signed up to a class in programming at Dublin Business School (DBS). “I had already done programming in Syria so I had a good knowledge of it. I thought the course would give me a better idea of academic English. Luckily, there was an Irish guy on the course who explained everything to me.”

Without the support of the Irish friends he met at DBS, Abou Hajar says he never would have passed the course. “It felt like I was in the middle of the sea drowning and this boat appeared and caught me. That person saved me. I used to sit with the lads at break time and they’d talk in their Dublin accents. It taught me a lot.”

Proud of his own country’s heritage, Abou Hajar enjoyed sharing stories with his new Irish friends of the Syria that existed before the war. “I was trying to show them the good things about my country; the heritage and the history. We had such diversity with Muslims, Christians and Jews. We had Arabs, Kurds and Armenians. Most people have only learned about Syria since the war started. I wanted to show that we lived in peace before.”

Before leaving Syria, Abou Hajar had started to develop an interest in photography. He continued taking photos in Lebanon and once he had settled in Ireland, began to really embrace his passion and began promoting his work through Instagram and Facebook. He also began to draw on his graphic design skills, which he learned in Syria before the war broke out, to make some extra cash while studying. “I used to design things for people part-time so I could save for college. I would do business cards and logos, it wasn’t a lot of money but it was something.”

While at DBS, he applied for a degree in software development at Carlow IT. He was accepted onto the course and recently completed his second year. “The biggest struggle for me since coming here was the education. It was hard finding a way to complete my studies and I spent a lot of time looking for colleges. But to be honest, I am happy to live my life here now.”

Next year, he hopes to find a six-month placement with a technology firm as part of his degree requirements. He also hopes to speak English with an Irish accent one day.

Abou Hajar says his friendships with Irish students at DBS and Carlow IT have played a vital role in helping him to settle into life on this island. He appreciates their questions about Syria when they see news reports on the conflict and says refugees must also make the effort to ask Irish people about their lives and culture. “You shouldn’t be shy, even if the questions are wrong people will correct you gently. As the Syrian quote goes, respects others and they will respect you.”

He says his parents are slowly settling into life in Portlaoise but that being so far from loved ones in Syria never becomes easier. “It’s hard for everyone. I still talk to my friends and my grandfather in Syria but it’s not just about family, it’s my memories of that place. I cannot forget the history of my country. I hope one day to go back and bring my Irish friends and build a country like Ireland there. We all live on the same planet. I didn’t ask to be born in Syria, my friends didn’t ask to be born in Ireland. All countries should help one another to create peace.”