‘Sick of living in a small-minded, Catholic country, I moved to Ireland’

New to the Parish: Federico Julián González arrived from El Salvador in 1998 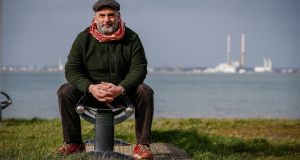 Federico Julián González: ‘I’m an Irish citizen who was born somewhere else. My alliances to this country are enormous because it’s where my kids are growing up.’ Photograph: Crispin Rodwell

Federico Julián González was three when his father, a doctor, was arrested by El Salvador’s military junta for caring for a guerrilla fighter. His father spent the following two years in prison while González’s mother tried to maintain some semblance of normality in the family home.

González, his parents and brother were forced to leave the country in 1978 after his father was released from prison. They spent a year together in Venezuela before González’s father returned to El Salvador after his brother, who had joined the guerrilla movement, and his father were shot dead.

The rest of the family moved temporarily to Nicaragua before relocating to Havana where González’s mother became an international representative for the FMLN (Farabundo Marti National Liberation Front).

“My mother never fired a shot but she was a professional, good-looking woman so a good image to present for solidarity with the front. They needed someone to coordinate internationally and Havana was where the solidarity was concentrated. We spent 11 years there.”

González pauses briefly to leaf through the sheets of paper he has placed on the table of the coffee shop where we have met. The words on these pages recount his family’s exile from El Salvador which he recently documented for his partner, actor and playwright Janet Moran, who is adapting his story for the stage.

We were exiles, that’s what our parents told us. We had to leave because otherwise we’d be shot

Reflecting on this period in his childhood, González recalls that while the family was forced to leave their home country, they were never described as refugees. “The Cuban government never mentioned the word refugee. We were exiles, that’s what our parents told us. We had to leave because otherwise we’d be shot.”

After school González studied psychology in Havana while his brother enrolled in medical school. However, after the signing of the 1992 peace accord that ended 12 years of civil war, the brothers dropped out of university and returned to El Salvador.

“It was bizarre. I had left when I was five and came back a 20-year-old man. We were four adults under the same roof trying to live like a family. But at that point I had lived without my dad since 1980.

“El Salvador was going through the most nasty, reactionary, right-wing post-war period you can think of. I had come from Cuba which was a very different country in terms of ethics and morals. I didn’t fit there. I would much rather be poor in Cuba than have more financial stability in El Salvador.”

The immediate aftermath of the civil war also saw the mass deportation of thousands of El Salvadorans arrested in the United States back to their home country.

“My dad would say kids with PhDs in delinquency were being sent straight from LA, where violence was always raw, to a country with loads of guns and zero employment. It created the perfect storm.

“Anybody who says Central America is sending their rapists and criminals to the US, guess what, you taught them how to rape and steal first and sent them back to us.”

After completing his studies in psychology, González began working as a translator for charities including Trócaire and groups associated with Irish Aid. He met an Irish girl and, in 1998, frustrated by the deteriorating situation in his home country, decided to move with her to Ireland.

In 1998 Ireland still considered itself the little country on the edge of Europe. It wasn’t ready for foreigners

While González embraced life in Ireland, he was conscious of how much he stood out. “In 1998 Ireland still considered itself the little country on the edge of Europe. It wasn’t ready for foreigners. Roddy Doyle’s ‘Irish are the blacks of Europe’ was still in people’s minds.”

After a short stint working in a call centre, a job González hated, he trained as a social care worker and began working with young people with autism. More than two decades on he still works in autism services, now with adults, and still gets great fulfilment from his work.

“I’m not making profit for a corporation and I actually look at people’s faces every day. You build relationships with these people and help make them happy. For people with autism, the world makes no sense, you have to make that sense for them.”

He has two sons from his relationship with the woman who brought him to Ireland and a four-year-old child with Moran. “The older ones have only been to El Salvador a few times but they consider themselves half-Salvadoran. They’re proud to be from there. They’re 19 and 16 now and my God they look Irish with red curly hair. You’d think I stole my kids, the Irish gene is strong.”

He has returned to El Salvador a number of times and recently visited Havana with his mother for the first time in nearly 30 years. The play Moran is developing around his life stems from those few days the family spent rediscovering the time they spent exiled to the Cuban capital.

How many countries are there where police do not carry guns?

While he was initially reluctant to get an Irish passport, González considers this country home. “I pay taxes here and my children are here. I’m an Irish citizen who was born somewhere else. My alliances to this country are enormous because it’s where my kids are growing up.”

He also appreciates the safety of this small island. “How many countries are there where police do not carry guns? Coming from such a violent society, that knowledge that policemen are not armed and are not going to shoot you, please let’s keep that.

“Home is where your books are, and I have very few books left in Salvador. God only knows where my ashes will end up but for now my kids are here so I’m here.”

A work-in-progress reading of Looking for America takes place at 6.30pm on March 14th in the Project Arts Centre as part of the Where we Live Festival. iti.ms/3c9zaQn