New to the Parish: Asim Mumtaz arrived from Pakistan in 2000 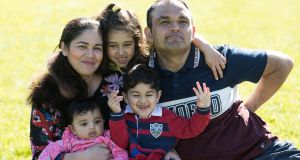 The first time Asim Mumtaz used an ATM in Dublin he turned to a passerby for help. Having tried unsuccessfully a number of times to figure out the instructions on the screen, Mumtaz called out to a nearby woman. The then-19 year old had just arrived in Ireland from Pakistan where he did not own a bank account.

“It was 11.30pm in Phibsborough and I’m very lucky she was a good person. It could easily have been someone who would take my money.”

Before moving to Ireland, Mumtaz lived with his parents in Mangla, a residential development for employees of the giant Mangla Dam in northeastern Pakistan. His cousin had already moved to Dublin and opened a restaurant and his parents were eager for their eldest son to study and work in Europe. “I didn’t have any practical experiences in life before I left. I didn’t even have a proper job. But basically everyone goes abroad if they’re able so they can pursue a career.”

Mumtaz took out a loan from home to pay for the flights and enrolled in an online marketing course in Ballsbridge College of Further Education in south Dublin. He arrived in October 2000, moved into an apartment with his cousin and found a job as a kitchen porter.

“Those initial dark, winter days with no sunshine were very tough. It was very hard to make phone calls back then and the first time I called my parents it cost 20 Irish punts for a 10-minute call.”

Shocked by the cost of public transport in Dublin compared to the price in Pakistan, Mumtaz walked more than 15km every day from his home in Rathmines to college in Ballsbridge, then on to work in Phibsborough and home again. Once he had paid off his loan, he started saving to study at university. He applied to a bachelor’s degree in electrical engineering at Dublin Institute of Technology and paid £5,000 in international fees. He spent the following four years studying by day and working through the night in McDonald’s on Grafton Street.

After completing his undergraduate degree, Mumtaz moved on to a masters in wind power and after graduation secured a job with ESB. Shortly before he completed his studies, Mumtaz began dating a young Polish woman. The couple stayed together for two years even though they always knew the relationship would have to end. Mumtaz was waiting for the day when his parents would call him home to meet his future wife through an arranged marriage.

“I wasn’t strong enough to move away from that tradition. I made it clear from the very start that the relationship would have to end but it was hard and did make me sad. It felt like I was putting someone through unnecessary pain.”

In 2011, Mumtaz travelled home to Pakistan where he was introduced to Sidra, a doctor from the city of Gujrat in central Pakistan. The couple met briefly under the supervision of their parents and 18 months later they were married. “I only saw her once before the wedding. We had a look at each other and that was it. We had a two-day wedding, about 200 people the first day and 400 the second.”

Sidra came back to Ireland with Mumtaz after the wedding and the couple moved into an apartment in Islandbridge. Their first child, a girl they called Eshaal, was born in September 2012. However, just weeks after she was born Mumtaz received shocking news. He had been suffering from depression and eventually made an appointment with the doctor after his arm and leg started feeling unusually heavy.

“I was trying to buy a house and was saving money. I didn’t pay much attention to my health and just hoped it would go away. I thought I can deal with this later.”

Mumtaz was referred to a neurologist and in October 2012, aged only 31, he was diagnosed with Parkinson’s disease. “The doctor said it was the same as what Muhammad Ali had. That was the only reference point I had, I didn’t know anything about Parkinson’s. I asked whether it was curable and he said ‘no, it just gets worse’.

“My first worry was would I be able to support my family? I’d only had a kid a month before and my wife wasn’t working at that time. I wasn’t used to claiming social benefits, I’d never claimed them before. I was worried my family would be put out on the street because I couldn’t pay my mortgage.

“The diagnosis happened the same week the clocks went back. It was so dark and the winter days created tension in the home. It was also difficult not having family to support you.”

Mumtaz waited six months before telling his parents about the disease. “I didn’t want to disappoint them. I’m the eldest son in the family, I didn’t want to tell them and make them feel sad.”

More than 5½ years have passed since Mumtaz’s diagnosis and he’s still working in ESB. His wife now works as a doctor and they have two more children, three-year-old Azlan and Sofia who is five months. In 2014, he became an Irish citizen and the family own a home in Lucan. His health has deteriorated in recent years and he must follow a strict daily routine of taking his medication, exercising and eating certain foods.

He increasingly notices that people stare when he goes out in public because of his jerky and involuntary body movements. “I don’t blame them for looking at me, it’s because of a lack of knowledge. Generally people with Parkinson’s shake but I have other symptoms. I don’t want to hide my disability but I wish there was an obvious sign like a band I could wear that people would see and know I have Parkinson’s. But generally once people know they react very positively.

“My target is to keep myself going until they find a stem-cell cure which is hopefully in the next few years. I feel like I’m in the best place to fight it. The care here is brilliant. A lot of people complain about the HSE but I have seen the worst side of healthcare in Pakistan so I think it’s brilliant here.”