‘My grandmother sent me to boarding school to protect me. It was a much safer option’

New to the Parish: Karen Mukasa arrived from Uganda in 2015 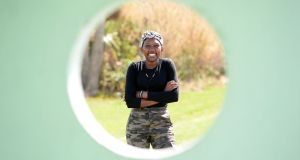 Karen Mukasa (17) from Uganda. She hopes to study health science at university in Ireland but also feels the urge to return to Uganda some day. Photograph: Alan Betson

Karen Mukasa was five years old when her grandmother sent her to boarding school. Even though she understood she was being sent away as a safety precaution, Mukasa cried for months after her grandmother and aunt left her alone in the unfamiliar boarding house.

“I remember the very first sports day when parents were allowed to visit but my grandma didn’t come. When I went home after term and asked her why she didn’t visit me she said, ‘I didn’t want you to grow too attached to me.’ She wanted me to be independent from her but it was still really hard.”

Growing up in the town of Mukono on the outskirts of Kampala, the capital city of Uganda, Mukasa often heard stories of young girls disappearing. Many of these children, she later learned, were sacrificed as part of a traditional practice rooted in the belief that the killing of a young child would bring fortune and wealth.

She also discovered that many people believed the mutilation of a child with “pure” blood could bring great success in life. A recent report by the HumaneAfrica charity found the practice, which involves the brutal cutting of children and removal of body parts while the child is still alive, impacts children in every district in Uganda while the country’s police force has warned that the practice is on the increase.

“In parts of Uganda they still have witchcraft and some people believe young children are pure and once you kill a girl you’ll get money and live in a big house,” explains Mukasa. “My grandmother sent me to boarding school to protect me. It was a much safer option for kids.”

While young girls were secure in the school, Mukasa recalls the tough disciplinary measures students faced if they misbehaved. “My friends at school had this bond of solidarity between us because if you did something wrong you’d get whipped. Besides hitting you they’d also give you punishments like cleaning a whole floor of the building or kneeling down on the floor for hours. It wasn’t always positive at school.”

Deep down, Mukasa knew she would have many more opportunities as a young woman in Ireland

Meanwhile, Mukasa’s grandmother worked hard in her small shop to save the money for her granddaughter’s education. She also received financial support from her daughter, Mukasa’s mother, who had emigrated to Ireland when Mukasa was just a baby. “She came to this country when she was very young and I didn’t meet her until I was 12. When you’re in Uganda there’s no social welfare or childcare and many women are abandoned with their children. My mother was 20 when she had me – so young.”

Mukasa says her grandmother encouraged her daughter to move abroad after Mukasa was born. “My grandmother was, like: ‘You have to leave here and go and build a better life for yourself.’ She had no future or hope in Uganda.”

In 2013 Mukasa met her mother for the first time. “I remember she smelled so good. She had this perfumed lotion she used on her skin. But she wasn’t what I was used to. My aunts were really conservative and she was so confident.” The following year Mukasa and her grandmother visited her mother in Dublin over Christmas. When they returned on another trip the following summer, her mother announced Mukasa was going to stay in Ireland.

“Part of me was really struck because I was just thinking about my grandma, who was going to take care of her and what was I going to say to my friends? I can remember the day we took her to the airport. We were walking along Griffith Avenue after taking the bus and neither of us spoke. We just walked in silence. The weather was grey – it was a not a good day. But it was the start of a new chapter in our lives.”

The day after her grandmother left Ireland, Mukasa began classes in the local secondary school. She immediately felt different and struggled to make friends. “It was really hard when people came over with this look of pity on their faces like you’d come from a war or something. They’d say: ‘Oh my god, are you the girl from Africa? That must be so hard.’ They asked if I had running water and electricity in Uganda. They spoke to me like I was in therapy. I found they had a very fixed idea of Africa.”

“I started the week after school began so it was really hard for me to integrate. People were talking about how they went to Spain over the summer but my stories of boarding school or helping my grandma in her shop, they just didn’t relate. I used to sit by myself in the science corridor so no one could bother me.”

After completing second and third year at the school Mukasa chose to skip transition year and moved directly into the senior cycle where she finally began to make friends. “Of course they had strong friendships already and it was hard for me to break the ice but they were really curious. I don’t know if it’s because they were older but they were able to understand me better.”

After nearly three years in the country, the 17-year-old feels far more comfortable and happy to live with her mother. She also says Dublin finally feels like home. She often reflects on the sacrifice her mother made by coming to Ireland alone so she could provide a better life for her daughter. “I don’t know how to express my gratitude to her. It was such a big gesture at 20 – to move away, give up everything you know and start a new life. It’s very brave.”

Mukasa hopes to study health science at university in Ireland but also feels the urge to return to Uganda in the future. “I can’t sit back when I know things at home are not good. Other people deserve to experience the freedom, opportunities and choices I’ve had. People need to dream and know their dreams will come true.”