'My graduation day was a big day for mum, it felt like she was becoming a doctor’ 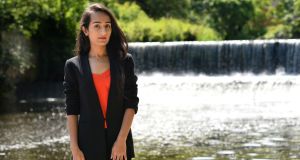 On June 11th, Anchal Jain, a medical student who had recently completed her exams at Trinity College, opened an email on her desktop. After months of preparing for the worst she was initially confused by the words that appeared on her screen.

Her parents were due to arrive in Dublin on a visit the following day and Jain had resigned herself to the fact that she would most likely return to India with them. She had researched the number of internship positions available to non-EEA students and recognised her chances of getting a job were slim. But then the email appeared.

“All my Irish friends had already got offers so I was the only one on the reserve list. I was ridiculously happy for them but still felt upset. I knew I would probably have to go back home and take a gap year. My friends were hopeful for me, they had more trust in me than I did. I had sleepless nights, tossing and turning, it was so stressful.

I felt weak at the knees, it was really surreal

But then I got an email out of nowhere offering me a job in Waterford. I accepted it straight away and called my parents. I felt weak at the knees, it was really surreal.”

Growing up in the Indian city of Hyderabad, Jain dreamed of becoming a fashion designer. However, as she grew older she discovered a passion for science and volunteered at hospitals. She began investigating medical schools abroad and applied to universities in the UK and Ireland.

In February 2014 she received an acceptance letter from Trinity. “It was mainly my mum who pushed me because she had always wanted to be a doctor but she got married at a young age so couldn’t do all the exams. She’s the one who said ‘you’re good at science, why don’t you consider it’.”

Despite being accepted to university, Jain wasn’t sure whether she’d actually make it to Ireland because of delays with her visa. 24 hours before her flight was due to leave, the visa finally arrived in the post.

“My initial plan was my brother would come with me and help me move in but his visa was rejected. Suddenly I was at the airport by myself contemplating whether I wanted to do this or not. I realised this is it, I have to get on this flight. I cried all the way to Dubai but then I stopped and said no, this is my new life. During the eight hours from Dubai to here I felt something different.”

Like most new students, Jain was initially overwhelmed by the size of the Trinity campus and the demands of living independently abroad. However, she quickly settled into her new Irish student lifestyle and began enjoying her studies. One class, however, was particularly challenging.

“I was feeling really nervous about the anatomy labs. I had seen patients before but this was learning from someone who had passed away. I was conscious this person had a family.”

Jain decided to get involved in the college’s remembrance service for the families of people who had donated their bodies to medical science. “I met the family of a man I had been working on after the service and in that moment I felt really proud to be a medical student. They told me about his life and explained how he had really wanted to donate his body. Not many people get to do that work and I felt proud.”

While Jain enjoyed living in Dublin, being away from loved ones during the holidays was always difficult. She spent Christmas day of her second year in college alone in her apartment, studying for the Trinity scholar exams. “I did go to my Irish friend’s house in Kerry for Christmas Eve but I felt Christmas was a family time so I went back to Dublin. I hadn’t spent Diwali, which is like our Christmas, at home since 2014 and I felt I was missing out on a lot.”

By her final year in Trinity, Jain had decided she wanted to work as a doctor in Ireland. However, she also knew that only the top scoring international students would have a chance of securing one of the 733 internship training posts which are primarily distributed among Irish students.

“I was used to working in Irish hospitals and knew how to speak to the patients here. In India I would have to speak in another language. I wanted to be in a familiar place and not be thrown into a completely different atmosphere. I know intern jobs here are difficult but in India I would be working for a lot more hours and less pay. But it was mainly because the familiarity that I wanted to stay and work here.”

The following day she greeted her parents, who had arrived for her graduation, with tears of joy

Jain completed her final exams in April 2019 and went on holidays with college friends while they awaited news on internships. As their June graduation date approached Jain became increasingly certain that she would have to leave Ireland. But then the email arrived with the offer of an internship position at University Hospital Waterford. The following day she greeted her parents, who had arrived for her graduation, with tears of joy.

Jain was overjoyed to have her mother in Dublin for her graduation. “It was more of a big day for her, it felt like she was becoming a doctor. She was so proud and the two of them kept calling each other the parents of a doctor. It was a very big thing for them.”

“One of the main reasons I was so happy to get the job was financial. They toughest decision my parents ever made was to send their only daughter abroad for five years. Every September there was a stress cloud on my parents and brother regarding my tuition fees and living expenses. But they never let me see that stress, they only pushed me towards achieving my dreams.

“But that burden of finances has vanished now. For the past five years they have been sacrificing for me but now I can finally pay them back.”