‘Moving to Galway was the best decision of my life’

New to the Parish: Jed Gjerek and his family arrived from Croatia in 2017 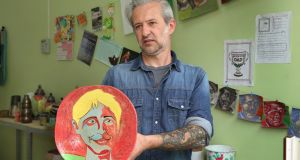 When Jed Gjerek arrived in Ireland in 2017 with his wife and two children, seeking better opportunities, there was no plan B for the family. After years of struggling to keep his pottery business afloat, the Croatian artist knew he had exhausted all employment options in his hometown.

Before 2010, life was much easier. Gjerek ran an art studio, supplied pottery to local restaurants, held workshops for children and art teachers, and wrote a book about traditional pottery in northwest Croatia.

“When you have skills and knowledge about heritage the ministry of culture gave you status for that. My first 10 years as a potter I ran a studio and lots of restaurants wanted to display the pots we made. At the best point there were 50 people working for me in different ways. I had two stores selling souvenirs in my hometown, so the studio was in full-time production. But when the recession hit Croatia people stopped travelling and my job fell apart pretty badly.”

Born and brought up in the city of Varazdin in northwest Croatia, Gjerek started his working life as a tattoo artist. After a stint in London working as an au pair, he moved back to Croatia and started college. However, third-level education didn’t suit him and he moved into developing his ceramics skills in the early 2000s. After his business fell apart during the economic downturn, Gjerek continued to work freelance, but when his wife was laid off and found a job in a grocery store he turned to friends for help.

“It was a really bad time for us. I was watching my studio fall to pieces and my wife’s job was bad. We both lost weight. I didn’t have any other option but to ask for help.”

‘Victim of the system’

Having grown up in Varazdin, a city of about 46,000 people, Gjerek knew some former school friends who had gone into politics and approached them for advice. One contact secured him a job in a local museum.

“From day one I knew it was a bad idea. I was forced to support a political group to get the job. On the one hand I was desperate for work, but on the other hand I wanted to fight for my rights as an independent artist. But I became a victim of the system. It’s a public secret that you have to be supported by someone in power to succeed.”

When Gjerek discovered his name had been included in a “black list” of artists not worth hiring, he decided he’d had enough and left the museum. He went back to freelance work, but struggled to earn enough to care for his two children.

“When I was growing up in Croatia it felt like I was trying to fit into a pair of shoes that didn’t belong to me. No matter how hard you work there is always something missing. They don’t care about art, it’s all about money. I didn’t want my kids to grow up in the same situation, fighting all the time for the right to make art.”

Gjerek knew some friends had moved to Co Donegal and started investigating opportunities in the area. He then met a friend who had recently relocated to Tuam in Co Galway. “They told me not to go north, that there were more jobs in Galway. So I decided to come here [to Galway] and it was the best decision of my life.”

Gjerek arrived in May 2017 and quickly secured a house to rent for his family, who followed in June. He found a job working night shifts as a production operator in a factory, a position which allowed him to focus on his pottery during the day. “It was my first time ever doing that kind of job and the first time I’d ever worked in a factory. But if I worked nights I could pay my bills and still make pottery.”

Gjerek spoke basic English when he arrived in Ireland but quickly discovered interacting with native speakers was far more complicated than he’d envisaged. “Attending a parent-teacher meeting to discuss your child’s education or going into the garage to talk about your car; you realise there are lots of different levels with the language.”

Gjerek and his wife enrolled in English classes while their son and daughter, who spoke no English on arrival, quickly picked it up at school. “They started school in September and by December I could see they were much more confident speaking to other kids. English has become their first language now. They speak it all the time.”

Gjerek now speaks English with ease but still struggles when trying to describe his art through the language. “In Croatian I can express myself very well but here I’m not even close to the skills that I want. I’m comfortable speaking English but describing my work is more difficult. I struggle to express myself in the right way.”

Gjerek now works five nights a week between 12.30am-8am but hopes to become a full-time artist again soon. He is a member of Ceramics Ireland and was part of the Galway 2020 programme through his membership of the Clay Galway group. He’s been involved in two exhibitions so far, and shortly before the Covid-19 pandemic, he had established a pottery club at the local primary school.

“Pottery is who I am. I haven’t reached the point where I can do it professionally here and pay my bills through it, so it’s good to have a regular job to support my family.

“I like the culture of ceramics and pottery in Ireland and have a sense of freedom that I can develop my craft. You’re not pushed to go one way, you can choose your own way. People really pay attention to your knowledge and skills.”

Asked whether he plans to remain in Ireland in the long term, Gjerek says he’s very happy here but has no idea what the future will bring. “We’re old enough and have enough life experience to know nothing is forever. But so far we love Ireland. I have big plans for my ceramics here but that takes time. We have international friends, we have an active life and we’ve travelled around the country. We want to stay.”

You can see some of Jed Gjerek’s work on his website, https://jedgjerek.com/