‘It’s amazing to be part of this response. Irish people complain a lot, but they unite in a crisis’

New to the Parish: Lora Ruth Wogu is proud to work at St Vincent’s but fears for her disabled son 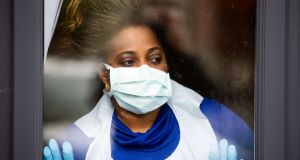 Lora Ruth Wogu was 23 years old when she arrived in Ireland alone. One year later she gave birth to her first child who spent the first few weeks of his life in an incubator.

“It was a very stressful time. I had difficulties during my labour and they kept him in the hospital because he was having fits. I felt isolated and missed my family. I didn’t have anyone to talk to. I was trying to understand why my child was like this but it was painful. If you don’t build a network of friends you could lose it.”

Wogu arrived in Ireland in March 2000, the same month the Government introduced the system of direct provision accommodation for asylum seekers. The young Ugandan woman, who had trained as a teacher before fleeing her home, was housed in a small block of apartments in Ranelagh in south Dublin. Soon after arriving she met her future husband, a Nigerian man who was also applying for asylum, and became pregnant.

As her son – who has cerebral palsy, autism and epilepsy – was born before the 2004 citizenship referendum, he automatically became an Irish citizen, and as a result Wogu received permission to remain in Ireland.

While in Ranelagh she befriended an Angolan woman who gave birth around the same time. “I started to teach her English. She had her baby before me and it turned out to be a very sick child. My son was also sick so we had these connections. I didn’t even know what her child had; we didn’t discuss the problems of our children when we visited Crumlin hospital. It was only much later I discovered the baby had sickle cell disease.”

Growing up in Uganda, Wogu’s family never discussed the fact that many relatives suffered from the serious, lifelong red blood cell disorder which is particularly common among people with African or Caribbean background.

It was only when she returned to visit Uganda following her grandfather’s death in 2008 that she learned about the illness that had destroyed the lives of so many loved ones.

Having trained as a healthcare worker after leaving the direct provision system, Wogu was determined to find out more about the condition and requested a test while she was pregnant in 2009.

“I found out from the results that I carried the gene for sickle cell. I had been doing my studies in phlebotomy at the time and you learn all about different diseases. But because of the stigma around sickle cell people didn’t want to talk about it.”

Wogu started linking up with parents of African background based in Ireland who had children with the condition. This included the Angolan woman she knew when she first came to Ireland. In 2012, she formally launched what has become the national charity Sickle Cell and Thalassaemia Ireland.

“It was an educational charity so we could remove the stigma. Through my research I’d discovered a lot of people were hiding the disease or didn’t want people to know their child had it. It was always misunderstood in Africa. The charity grew as families contacted us.”

In 2014, Wogu and volunteers from the charity started visiting direct provision centres to speak to residents about the disease. “These were people who had come from countries where sickle cell is prevalent. Like me they’d come here and didn’t know they were carrying the gene. The Department of Justice allowed us to go into accommodation centres and do outreach programmes.”

Wogu has spent the past 10 years working in the phlebotomy, or blood-testing, department at St Vincent’s University Hospital, in Dublin. She recently applied for carer’s leave to take care of her son, who is now 19, but returned to work full-time after the coronavirus pandemic broke out. Her husband, who usually works night shifts, stays home to care for their son. The couple’s four other children also live at home.

Before the crisis broke out Wogu was studying part time for a master’s in quality and safety in healthcare management at the Royal College of Surgeons in Ireland. Like most of regular daily life, this has also been put on hold.

Strangely enough, it is a beautiful feeling, knowing you can help people during such a difficult period

Wogu says she feels honoured to be part of the Irish health service at this crucial time but worries a lot for her son. “A lot of people are in the same position as me; I know people who live with an elderly husband or mother-in-law and others have a child with a disability. I’m always conscious when I go home after work that I can’t afford to see him get sick.”

Hospital protocol requires that Wogu must leave her uniform and work shoes in the hospital. She also showers as soon as she gets home.

The day after we first speak for this interview, Wogu gets in touch to say she is in self-isolation after suffering from mild coronavirus symptoms. She describes the wait for the results as “mentally exhausting, psychologically draining and emotionally painful”.

“I have five kids and we are a very close family. It’s difficult to maintain space, especially with my eldest son who is special and very close to me. He is my baby boy and so attached to me.

“I’m worried if I’m positive my boy will get it first. I cannot bear to think of it honestly and I try to keep a positive mind.”

Stuck at home, Wogu says she misses work at the hospital. “Strangely enough, it is a beautiful feeling, knowing you can help people during such a difficult period. But most of all, there is also a feeling of guilt. Feeling like you have abandoned your fellow colleagues at this very crucial period. It’s very daunting not knowing whether the symptoms are Covid related.”

Despite her worries about the outcome of her test and her son’s health, Wogu feels reassured by the Government’s response to the crisis. Both Irish citizens, she and her husband always vote in elections.

“Remember we just came out of a vigorous election with people fighting. But then the pandemic comes and everyone unites. Of course there are still people against the Government but I feel the Irish public has joined together and it makes me feel good to be a part of that.”

“It’s amazing to be part of this response. Irish people do complain a lot but they are also very caring and loving. They unite in a crisis.”

Wogu has received word that her Covid-19 test came back negative and happily reports that she will be able to return to work.