New to the Parish: Persida Caldaras arrived from France in 2002 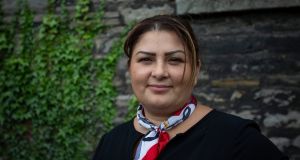 Persida Caldaras, a Roma woman who came to Ireland in 2002. Photograph: Crispin Rodwell

Persida Caldaras was heavily pregnant when she started selling the Big Issue on the streets of Dublin. She also sold flowers in nightclubs on Harcourt Street. “I knew I didn’t have another chance to get money, it was my only way. I didn’t make a lot but it was enough to survive on.”

Caldaras grew accustomed to the racist slurs she heard around the clubs. However, one night a man went a step further and punched her in the face. “I was clearly pregnant. The guards brought me home and just told me don’t go out anymore, don’t sell flowers. I think that’s what they said, I didn’t really understand and I was scared.”

One of six children, Caldaras was born in western Romania where she attended school until her parents decided to move to France. She remembers the teacher dividing the classroom in half with Roma students on one side and Romanians on the other. “We weren’t allowed to sit together because we were different. Some Roma children would come into school dirty, not wearing good clothes, but it was because their parents didn’t have the possibility to buy anything. Lots of the parents told their children not to play with Roma people. That made me feel very bad.”

When she was eight years old her parents packed up the family’s belongings and left Romania. At first Caldaras liked her new French home and found people were friendly. However, she did not enjoy sleeping in a car each night with her parents and five brothers. “We didn’t have a house. My mother had a niece in France and she had said France was better. My parents were selling the Big Issue. We were sleeping two years in the car.”

The family returned briefly to Romania before going back to France again. “There were no other possibilities so we had to go. My parents wanted better opportunities for me and my brothers.” In Paris, Caldaras joined her parents in selling the Big Issue. “I knew I couldn’t do anything else because I didn’t have a formal education. I wasn’t going to get back to school. There was no possibility to learn because we were moving all time.”

When she was 18, Caldaras met her husband and shortly after gave birth to her first daughter. Friends already living in Ireland suggested to Caldaras’s father that the young couple move to Dublin for a new start. “I was pregnant at the time and he told me it would be better for my children to come here. It would give them a better future.”

The couple arrived in Dublin in 2002 where they claimed asylum (Romania would not join the EU until 2007). Caldaras spent the first three months in a direct provision hostel before moving into a friend’s apartment. She became quite ill in the latter part of her pregnancy and was admitted to hospital ahead of her due date. With very little English, she struggled to communicate with doctors and midwives so asked a family friend to help with translation. “He was the only one I knew who spoke English but in the Roma community to talk with a man about your pregnancy and about women’s issues is a very shameful thing. It was a very difficult time having to speak about my personal problems with a man.”

Caldaras gave birth to two children before the 2004 citizenship referendum which meant they were both recognised as Irish citizens. As a result, Caldaras and her husband were given permission to remain in Ireland. The birth of her third child, however, was particularly traumatic. Caldaras was alone the night she went into labour and called an ambulance to take her to hospital. On arrival she says the receptionist shouted at her for calling the emergency services and told her she should have walked. A few hours later she gave birth to a baby girl with a cleft palate. “I had to go to lots of appointments with the doctor and didn’t understand what he was saying. That was the point when I realised I needed to learn English.”

Watching her children growing up in Ireland, Caldaras often worries whether they are happy in this country. Like nearly all Roma children, she knows they hide their ethnicity from school friends. They are happy to speak Romani at home but as soon as they step outside the door they switch to English. Most Roma children do not speak about their identity with their peers for fear of rejection, she adds.

This anxiety is not helped by the fact that Caldaras and her family have suffered a series of racist attacks in recent years. It started with local teenagers throwing eggs and potatoes at the family car and harassing her children. She recalls her son crying after one teenage boy told him he had to leave the area. People frequently shout at the family to “f***ing go back to your country”, she says. “I stopped letting my children go outside because I was scared, I didn’t know what might happen.” Two years ago the family’s car was set alight in front of their home by a group of teenagers. Caldaras informed the gardaí but says they didn’t help and that no one was arrested for the attack.

Despite these hardships, Caldaras is still optimistic about the future. She enjoyed her recent work at the Pavee Point Traveller and Roma centre and loves volunteering at a health clinic for Roma women. “I want my children to stay here and go to school and college. They have different possibilities here that I didn’t have and my parents didn’t have. They can have a different way of living here.

This Friday, August 2nd, Pavee Point will mark Roma Genocide Remembrance Day when 2,897 Roma and Sinti were exterminated in the gas chambers at Auschwitz in 1944. An estimated 500,000 to 1.5 million Roma were killed by the Nazi regime.