‘Ireland is not a typical European country. It's more like Africa’

New to the Parish: Rwandan who arrived in 2013 is grateful to Ireland 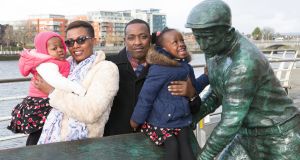 The first time Adolphe Ndagijimana met Joy he knew there was something special about her. It was 1998 and Ndagijimana was only 13, but he made an effort to keep in touch with her family after they moved to Europe. Ten years later the pair unexpectedly reunited in Ndagijimana’s home country of Rwanda.

“She hadn’t told me she was coming, and when I saw her from far away I said ‘Oh my God, where did this hot girl come from? How she looked before she went to Europe and how she looked when she visited was totally different. She was so pretty and in that moment I said ‘This girl has to be mine’.”

Joy had already been living in Ireland for four years, but the couple kept in touch after she returned to the Continent. Initially she did not reciprocate his advances. “She refused me at first. I asked her if she had a fiance and she said yes, so I said, ‘Tell your boyfriend I’m here now’. She thought I was joking but it was my dream to marry her.”

Ndagijimana was born in 1985. He lost his entire family in the 1994 Rwandan genocide when he was just nine. Nearly a quarter of a century later, he still prefers not to speak about that dark period in his life. Eventually he decided to leave Africa to start a new life and arrived in the Netherlands in 2011. “After what I saw in the genocide, after what happened to me, I wasn’t interested in living in Rwanda any more. I felt like the walking dead and was traumatised because of what happened. I had lost my family and I was alone. I thought if I got the chance to leave that place, maybe I could start my life again.”

He successfully applied for asylum in the Netherlands and began learning Dutch. He struggled with the language but was determined to reach a certain level so he could find work and settle in the country. Meanwhile, he continued speaking to Joy and, after securing his refugee status and travel document, visited her in Limerick. He immediately felt more at home in Ireland than the Netherlands.

“Ireland is not a typical European country. It’s almost like Africa. The way the people chat and live their lives, it’s not like in Holland or Germany or Belgium or France. People in Ireland value their family, that’s something I’ve discovered here.”

After a few visits the couple decided to get married. “We had two choices: Holland or Ireland. It was easy to bring Joy to Holland because by that point she had Irish citizenship. But she had been in Ireland 10 years and had friends and work here. It would be hard for her to go to Holland and learn Dutch.”

The couple settled on Ireland and were married in a church ceremony in Limerick in June 2013. A few months later he officially moved to Ireland. “That was definitely the happiest time because we had waited a long time to be together. Here we could be together.”

He didn’t speak a word of English when he arrived in Ireland, and often turned to his wife for help. He wanted to take classes but knew he needed to work, particularly after the birth of the couple’s first daughter, Janice. He found a job in a laundry and picked up basic English from speaking to people in the local church. He was inspired by his wife, who had also arrived in Ireland without English but had learned to speak it fluently. However, after a few of years he realised he could never progress professionally without a solid grasp of the language, so he left his job and began taking employment skills English classes at the local Vocational Training Opportunities Scheme in Limerick city.

Two years on he speaks English with confidence and ease. Janice is nearly four and his second daughter, Jaissah, is 18 months. Having lost his parents at such a young age, he says, his young daughters bring him huge happiness. “When I came here I didn’t have family. This is my first family; they’re my mother, my father, my brothers and sisters. They are everyone I didn’t have in my life.”

“Today I’m minding my daughters, but tomorrow they will be independent. I want to help them until they’ve grown up, but then they will choose themselves what they want to do. My happiness is because they have been born in a free country and have the right to do whatever they want. They will have many opportunities here. I wish for them to have a better life.”

He is determined to find a job so he can play a role in supporting his family alongside his wife, who has worked in a nursing home for seven years. He worked as a cameraman in Rwanda and would ideally like to work in that field, but for now he is happy to take on any kind of employment. He says he feels happy in Limerick and that he has rarely experienced racism in this country.

“Where I come from in Rwanda we had too much racism. We were the same people but I’d see neighbours killing their neighbours because of their tribe. Even if you meet someone here who is not a good person, you cannot call that racism. Not everyone is good, there are bad people everywhere, but I cannot see racism here.”

Ndagijimana says he is grateful to Ireland for “opening the door for immigrants” and “treating us like citizens”. He is also thankful for the support and guidance he received from teachers at the Limerick scheme. “Many of us come here with no English but the teachers help us start a new life. They are like my sisters and brothers now, and I really appreciate them. If you’d met me when I arrived and then you met me today, it’s like two totally different people.”

‘Did I miss anything?’ A modern Rip Van Winkle emerges, blinking, into lockdown
8

‘Tralee felt friendlier than Killarney. We discovered a different welcome there’
9