In Offaly people were like ‘who is this guy, what is he doing here?’

Takashi Miyazaki arrived in Ireland from Japan in 2008

Takashi Miyazaki moved to Ireland from Japan in 2008. He now lives in Cork with his Irish wife Stephanie and their two sons. The couple own and run two restaurants in Cork city, Miyazaki and Ichigo Ichie. 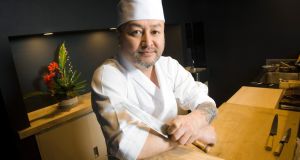 Takashi Miyazaki’s first job after leaving school was in a small café in the airport of his home city of Fukuoka on the island of Kyushu in southern Japan. He was studying economy and trade at university where he had been awarded a sports scholarship for his skills in Kendo (Japanese fencing). However, he had little interest in academic studies and preferred riding his motorbike to the beach and cooking for friends.

“We’d never go to class, we had the motorbike and would go to the beach or mountains and after that I’d cook food for them. They’d buy the drink and say they were really happy with the food.”

As a teenager, Miyazaki dreamed of becoming an artist. However, when he approached his parents with the idea of going to art school they rejected his plans. “They wanted me to be a policeman or a fireman . . . it was a safe job.”

A few years later, when he returned to his parents to tell them he had decided to drop out of university and become a chef, he was prepared for another negative response. “I said ‘now, it’s my turn’. If they said no, I had to go anyway. They were disappointed but they were okay about it.”

His culinary training began while working in the kitchen of a five-star hotel in his home city. He liked living in Fukuoka where he had access to fresh seafood from the nearby ocean mixed with traditional ingredients from the mountainous regions. He knew Tokyo could offer an aspiring chef many opportunities but was not interested in living in the bustling capital city. Instead, he moved to the island of Okinawa in the East China Sea where he worked in an Izakaya restaurant.

“It was like a local Japanese bistro, more casual, and people go there every day drinking and eating. I learned a lot on that island. I started working with a local farmer and learned about growing sugar canes like edamame and lots of different types of potato. It was good to know all the about the produce and processes.”

Later he moved onto a job in Hiroshima where he worked for a short period in his uncle’s restaurant. Then a friend suggested he check out the local Irish pub which was looking for a chef.

“Irish music was really popular at that time in Japan with Riverdance, and U2 were my heroes when I was a high school student. I also knew the film The Commitments and Guinness beer. But my interest in Irish food? I had no idea!”

Miyazaki interviewed for the position and was offered the job of head chef at the Molly Malone Irish pub. While he had become an expert in preparing ramen and sushi, the young chef struggled to rustle up an Irish stew or cottage pie. “I was following the recipes but I wasn’t good enough so the owner brought a chef out from Galway to train me.”

While working at the pub, Miyazaki met and began dating a young woman called Stephanie from Co Offaly who had come to Japan to teach English. When her visa expired and she had to return to Ireland, Miyazaki decided to join her. Settling into life in Co Offaly was far more challenging than Miyazaki had envisioned. He arrived in Ireland in 2008, just weeks before the financial crisis hit. “In Japan the recession had already started so I was like okay, I need to leave. But then the recession came here straight away. I had got a work permit to work in a restaurant in Athlone. I worked there for four weeks and then it closed down.”

Finding another job in the Irish midlands was a struggle for the Japanese chef. He enjoyed helping his girlfriend’s father on the family farm and loved living in the Irish countryside but often felt he stood out in the small towns and communities. “In Offaly people were like ‘who is this guy, what is he doing here?’ It was so strange for them.”

The couple were married in 2010 and shortly after began to focus on their real dream – opening a Japanese restaurant in Ireland. They spent weeks travelling around the country, scouting out potential buildings in Belfast, Galway and Co Clare. Cork city was the last place they visited.

The first time I remember watching the hurling it was unreal, it looked so dangerous

“I loved Galway but the water there doesn’t suit my cooking because the ingredients are so delicate. But Cork had good water, it’s nice for Japanese broth. I loved the English market and West Cork.”

In 2015, after years of saving and hard work, the couple finally opened the eponymous Miyazaki restaurant on Evergreen Street in Cork’s city centre. Three years on, they are about to open a second, more high-end restaurant in the city. Ichigo Ichie, which opens this month, will offer a kaiseki or Japanese tasting menu of between eight and 12 courses.

“When we arrived there was a Japanese restaurant here but no real Japanese food. For me it was a big challenge because Irish people had already gotten used to that type of Japanese food. For the menu in Miyazaki, I came with real food that Japanese people eat every day. I’ve always said Japanese food is like a treasure box, it’s not only sushi. If you open up that box so many things come out and that’s why I try and bring food from the different regions.”

When he’s not in work, Miyazaki and his wife are kept busy looking after their two young sons: Sean (3) and Stephen (1). He’s already looking forward to the day when he can stand on the sidelines and watch his boys playing Irish sport. And what would he like to see them play? “Rugby or GAA. GAA is cool, I like to watch it. The first time I remember watching the hurling it was unreal, it looked so dangerous.”

Asked if the family has considered moving back to Japan, Miyazaki says he’s happy to stay in Ireland as long as they can continue to visit his family every couple of years. “I think my mum and dad are proud of what I have done here and what is my mission. I’m also proud of myself. Me and my wife built this from nothing, so we’ll stay here.”