‘In Kerry they’ve strong accents. I thought they were speaking Irish, not English’

New To The Parish: Nasir Yasin arrived from Somalia in 2005 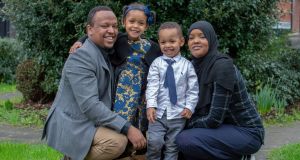 Nasir Yasin spent seven years living in direct provision before he was granted permission to remain in Ireland on humanitarian grounds. He arrived in the country alone, aged 18 and without a word of English in 2005. He had fled his home in Somalia with the support of his uncle and hoped his parents and sister would follow him to Europe. Thirteen years later he still has not seen his family.

“When I arrived here I was really young and it was a scary time. But I had to come because of the civil war at the time and the situation in Somalia was very difficult. My family and I were displaced from one another and I had to run away from the danger.”

Yasin spent his first few weeks in the Balseskin reception centre in Finglas before being transferred to the Park Lodge direct provision centre in Killarney, Co Kerry. As soon as he arrived he started asking people in the centre about local schools. “The first thing I did was look for education. Some people at the hostel told me to go and check out St Brendan’s College and I visited the school and asked to register. They even helped me pay for the school uniform.”

Yasin spent the following two years studying for his Leaving Cert and learning English. He says the support from the school’s teachers made the settling in period a lot easier. “It was really exciting to be in school but on the other hand it was difficult because I didn’t speak the language. Also in Kerry they had a very strong accent so sometimes I thought they were speaking Irish, not English. But I got extra hours from the teachers and worked very hard. It was a brilliant two years.”

Like his classmates, Yasin applied for third-level education through the CAO form in sixth year. However, it quickly became clear that as an asylum seeker he would have to pay international fees to continue his studies and realised he was unable to follow his friends to university. His peers rallied together and sent a letter to the Department of Justice requesting that Yasin be exempt from paying the fees but their attempts to help their friend failed.

“I still have the letter they wrote to the department and I’m still in contact with the student who wrote it. He’s a doctor now. I feel emotional even talking about it, my classmates supported me. It was really difficult, I wanted to be like my friends but I had to wait.”

Shortly after completing his Leaving Cert, Yasin was transferred to a new hostel in Wicklow town. After this centre closed in 2008, he was again relocated to a self-catering centre in Dundalk. Each year he re-applied through the CAO in the hope that his application for asylum would be accepted.

“All my classmates had gone to college and I had many friends in my hostel who got refugee status and were able to bring their family here. I was all alone waiting.”

In 2012, Yasin was told he could remain in Ireland on humanitarian grounds. This form of permission to remain is granted when a person is refused protection but their case is reconsidered at the discretion of the Minister for Justice.

“When I got leave to remain I was really excited, it was life-changing. I could finally get an education and work. Except I still couldn’t bring my family here. I had all the rights but couldn’t bring them to Ireland.”

Yasin began studying civil engineering at Dundalk Institute of Technology and in his second year he met a young woman called Samsam who had come to Ireland from Somalia through family reunification. “She was the sister of a friend of mine and was really amazing. Before Samsam it was just me here by myself. But she encouraged me. I told her my story and she said ‘you’ll be okay, you’ll become an engineer’.”

In 2014 the couple were married and the following year their daughter Mawaahib was born. “My wife has played a big role in my life and in my happiness and success. She is not just my wife and the mother of my kids, she is my best friend.” The couple now have a two-year-old son called Mohamed while Mawaahib recently began pre-school. “Sometimes God gives you the gift of someone calling you daddy. I don’t have my own mum or dad here but I have someone who calls me daddy.”

Yasin recently found a job in Dublin and commutes from Dundalk where he lives with his family. In September 2018 he received a letter informing him that his application for Irish citizenship had been successful.

“When they told me the ceremony would be in Killarney, my beloved previous hometown, it was a lovely feeling. I always used to tell my wife I’ll bring you to Killarney some day so I booked us a hotel for the weekend. I showed my wife and our two kids the hostel where I lived, the school I attended and I took them to Killarney National Park to show them the waterfalls and places where I used to cycle and climb during the summer.”

Yasin is now focused on applying for his parents and sister to join him in Ireland through the Humanitarian Admission Programme 2 (IHAP) announced by the Minister for Justice last year. Under the scheme, Irish citizens of foreign birth from the top 10 major source countries for refugees – which includes Somalia – are entitled to apply for immediate family members to come to Ireland.

“If my family came here it would be a miracle, they have been through so many difficulties. I’ve watched so many people bring their families here but it was never me. But in November everything changed with my Irish citizenship and now anything can happen. My destiny has changed.

“Ireland is already my home but it will feel more like home if I can bring my family here. I had no hope for 13 years but now, finally, I have hope.”

What will happen to all those new hotels Dublin was to get?
6