In Ireland you are not invited to someone's house. It can feel superficial

New to the Parish: Immanuel Darkwa arrived from Germany in 2007 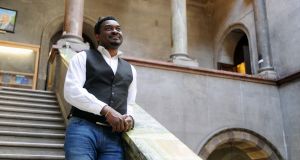 Immanuel Darkwa’s first experience of Monaghan town was a dark bus station late at night. The Ghanaian architect had arrived in Dublin Airport earlier that evening where he caught a bus heading north to his new Irish home.

He was surprised to discover a deserted town and dismissed the bus driver’s suggestion that he drag his luggage down a dark road in search of his B&B. When a fellow passenger offered to share a taxi from the station he immediately accepted.

“I nervously hopped in with this guy not knowing where I was going. The driver said: ‘I’ll drop your man off first and then I’ll drop you.’ Eventually, 40 minutes later, he left me at the B&B. When the taxi the next morning only took 10 minutes to get to work I realised something was wrong. I only figured out after a couple of days that he had actually brought me to the next town, Clones, and then back again. Just because he wanted to have a chat he drove me all that way.”

Before moving to Ireland, Darkwa lived in the German city of Dortmund, which has a population of more than 600,000 people. Setting up a new life in a town of 7,600, not far from the Border with Northern Ireland, was a shock to the system. “I had looked at the map before leaving Germany and when I saw Monaghan I thought I could live in Dublin and drive to work, it was only about an hour. But it didn’t work out that way.”

Born in Ghana, Darkwa spent the first decade of his life in the capital city of Accra before moving to Germany with his family where they lived in a suburb of Dortmund near the city’s famous football stadium. “I was pretty young when we moved. I grew up in Germany, did my school and college there. We’d always been a nomadic kind of family. My brother now lives in Tel Aviv, my sister lives in London and my other brother is in the States. We’re all over the place.”

Having developed an interest in colonial architecture during visits back to Accra, Darkwa chose to study architecture at university. He went on to do a master’s investigating the use of insulated wall panel systems in tropical regions – following a similar path to his father, a doctor who worked in tropical medicine – before graduating as an architectural engineer.

In 2007 Darkwa received a message from a company in Ireland with a job offer as a project co-ordinator with the Kingspan building materials group. Attracted by the prospect of creating designs using timber framed structures, Darkwa decided to make the move. He spent his first few weeks in Monaghan in a B&B before moving into an apartment with a young woman from Galway.

“My flatmate and her boyfriend used to invite me to these local occasions in farmhouses down dark country roads where they had Irish music, whiskey by the fireplace and an old lady singing emotional songs. Monaghan was a great introduction: I was thrown into the deep end and really experienced the revolutionary Irish culture.”

Darkwa’s Monaghan work colleagues were friendly and often invited him to events in the town. However, he soon noticed that the invitations never extended into people’s homes.

“In Germany it was quite different, you would be asked to a person’s house. But in Ireland it wasn’t the done thing and sometimes felt quite superficial. I felt I was being exposed to Irish culture but without much depth. Over time I realised that people in Monaghan might be a bit apprehensive or suspicious given the Troubles in the past. It didn’t really affect me negatively but Monaghan grew too small for me.”

After a year in the town, Darkwa transferred to the Kingspan office in Tullamore where he managed a new division for the company. However, he struggled to settle and often felt uncomfortable walking along the streets near his home at night where he had witnessed fights breaking out. He spent his weekends exploring the towns in the surrounding areas and travelling west when friends came to visit.

More than a decade on, he reflects on his initial two years in Ireland as a vital introduction into Irish life. “The spells I spent in Monaghan and Tullamore really made me understand rural Ireland. I still say today my best experiences of Ireland were in Monaghan.”

Darkwa eventually moved to Dublin, where he secured a job with an architecture firm overseeing the construction of large supermarkets around Ireland.

“Working as a project architect I dealt with all kinds of people from different parts of Ireland and enjoyed trying to figure out where people came from. I know the Sligo accent well now and the Cork one. I can hear the difference between Dublin’s northside and southside. I think my favourite accent would be the Kerry accent; it’s difficult to understand but I enjoy it.”

In 2011 Darkwa moved to Carlow after securing funding to develop a start-up focused on manufacturing shelter systems for humanitarian emergencies. He spent the following two years building the company before moving into teaching at the school of management in IT Tallaght. He has spent the past four years working on a PhD on humanitarian entrepreneurship at Trinity College and will start teaching at the university in the coming weeks. Darkwa says his dream is to develop a “centre of excellence for humanitarian development and innovation” in Ireland.

Darkwa now owns a house in Ireland and is often visited by his daughter, who recently spent a year studying in Ireland and is now training to be a doctor in the UK. “She has developed a love for the English language and has great friends here so comes to visit all the time. I’d like to stay here, all of my professional life since 2007 has been in Ireland.

“I’m really grateful because I don’t think I would have had all these opportunities in Germany, from funding from Enterprise Ireland to a research council funding and a PhD. You couldn’t ask for more. I’ve gained a lot from being here and hope this dream continues.”