‘In Dublin the roads were clean, and the air breathable, but I still missed India’

New to the Parish: Sugandha Arora arrived from India in 2017 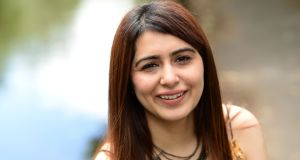 Sugandha Arora: ‘I couldn’t help but join the dots of how similar this country is to my own. They were both colonised by the British and they were fighting for independence.’ Photograph: Dara Mac Dónaill

Before Sugandha Arora’s parents came to visit her in Ireland she had never ventured outside Dublin. Her first few months in the country were spent pining for her friends and family back home in New Delhi while trying to focus on her university studies. It had never occurred to Arora that she might take a bus or train outside the capital city; her focus was on getting through the year and going back home.

The Indian student left New Delhi in September 2017 to study for a master’s degree in data and computational science at UCD. She knew nothing about the country where she was headed, only that the university fees were lower and they spoke English. She’d also read about Dublin’s booming tech scene and the many job opportunities in the data field. After three years working as a data analyst in Delhi, she felt like a change.

“I’d lived in Delhi all my life; I’d lived with my parents for most of my existence. I needed to be independent but I was very dependent on them. I had to move out of home so I could learn about myself and who I am. That wasn’t possible while I was still at home with their support. I’d come to saturation point with my job and wanted to get out.”

Despite her initial enthusiasm for adventure, the Indian student did not enjoy life in Dublin at first. “It’s nothing against the country but I didn’t want to know anything about Ireland, I just missed home so much. When you’re so accustomed to being around people who love you it’s difficult to be in a place where nobody knows you. There was a lot of homesickness which contributed to the feeling that India was the best.”

Arora also found it difficult to build friendships in the city. “I used to go out and have fun, but they weren’t naturally the kind of people I would have chosen to hang out with. I couldn’t make many friends, and that was probably one of the biggest challenges.

“Simply put, I was not used to Dublin. The roads were clean and the air was breathable but I still missed home.”

In March 2018, after six months in Ireland, Arora went back to New Delhi for a holiday. “It felt like I’d never left, I met up with friends and it was fun. But when I got back to Ireland I had a new energy, the homesickness was gone.” Arora also found solace in the knowledge that her parents would be arriving in June for a visit.

With only one week in the country, Arora’s parents were eager to visit as many place as possible and arranged a number of day trips outside the capital. During the drive to the Giant’s Causeway, Arora struck up a conversation with an Irish tour guide. “He was so passionate about being Irish and had such amazing things to say about Ireland. He talked about Irish history which I knew nothing about. I didn’t want to know anything about it before.

“India and Ireland, besides sharing the same colours of flag, shared a deep-seated longing for freedom and have risen up a nation. I couldn’t help but join the dots of how similar this country is to my own. They were both colonised by the British and they were fighting for independence. The stories about the Famine in Ireland were similar to what was happening in India at that time.

“I got to know so much more about the Irish culture which I thought was mostly about a pint of Guinness and Temple Bar. I found myself being connected to the country for the first time in the truest sense.”

Arora’s travels around Ireland with her parents gave her a new sense of comfort in her Irish home. “I did cry a little when they left but I wasn’t shattered. I was confident that I had more things to see in Ireland and it gave me a better sense of belonging in this country.”

After graduating from her masters, Arora decided to stay on in Ireland. She spent a few months searching for work and eventually found a job as a business analyst. “I have met so many people and learned so much about different cultures from countries like Spain, France, South Africa and Russia through my work. Before I had the problem of not being able to make friends but now I have many friends from different nationalities. I’m getting to know about their cultures, which is broadening my horizons. I love my work, everybody is very supportive.”

Arora’s parents also encouraged their daughter to stay longer in Ireland and find work. “When they came here they saw it was such an open culture and they loved it. Now I think they’re happy for me here.”

Asked how long she would like to spend here now she feels more settled, Arora says the plan is just to “go with the flow”. “I’m not sure how long I’m going to live here but I know I’ve got a lot from being in Ireland. Not just in terms of getting a job and a masters degree but also learning about myself. I needed to understand who I was but I couldn’t do that while I was at home in my comfort zone.

“Calls back home have reduced quite a lot because I’m now living in the present, not the past. There is a stark difference between the person I was when I came here and the person I am now. I think I was living in a pretty closed shell before. I had friends from the same community as me, friends who were just like me. But now I have expanded my life to include people who are nothing like me. I’ve come a long way from where I was before and where I am today.”