‘In Australia, my Irish wife was bitten by a python on our wedding day’

New to the Parish: Conor Murphy arrived from Australia in 2001 and again in 2013 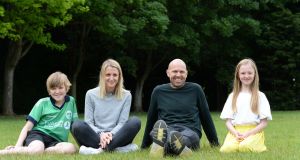 The night Conor Murphy married his long-term Irish girlfriend he had to make an unexpected long-distance phone call from an Australian hospital to a farm in Co Laois. The couple had travelled to north Queensland, where they eloped to a beach despite plans for a large family wedding in Ireland. However, their secret nuptials were not the primary reason for Murphy’s call to his new in-laws.

“We were walking along and my wife stepped on a python. She stood on its belly and it curled up around her leg. I’d seen loads of snakes before but never seen anyone being bitten. Linda had to get blood tests to make sure there was no venom in the bite, and we spent our wedding night in hospital.”

Murphy’s phone call to Ireland that night not only included the report of the snakebite but also news of the wedding. “It was a double whammy of a shock. I opened with ‘Linda has been bitten by a snake and we’re in hospital’ and then said ‘We got married today.’ I can only imagine what her mum thought.”

A lot of people came to Australia for a new start. We were conscious of our Irishness, but we’re not like Americans; I wouldn’t say I’m Irish-Australian

Murphy and his wife were living in Australia when they married but first met in Whelan’s pub in Dublin shortly after the young Australian arrived in Ireland in 2001 on a backpacking trip.

Growing up in the seaside town of Warrnamboolon, on the southwestern coast of Victoria, Murphy always dreamed about travelling abroad. He was also keen to spend time in the country of his ancestors. His paternal grandfather, Wilfred Lovelock Murphy, often spoke about the family who left Mayo, while his mother liked sharing stories of the brothers from Kilkenny who emigrated in the late 1800s.

“In the past I think people would hide their history of Irish convicts. A lot of people came to Australia for a new start, but I don’t think my friends would know much about their past either. Things were forgotten about and got lost. We were conscious of our Irishness, but we’re not like Americans; I wouldn’t say I’m Irish-Australian.”

Murphy was 22 when he arrived in Dublin with a group of friends to spend a year travelling around Europe. Soon after he met Linda Moloney from Laois, and when his trip finished she applied for a visa to spend a year in Australia. The couple then moved to London, where Murphy worked in construction before returning again to Australia.

Murphy found work as a plumber in the oil and gas industry, and the couple had two children, Ruairí and Órla. But being so far from family in Ireland became increasingly difficult.

“It was always in the back of my mind that I had to get Linda home at some point. She wanted to go back to Ireland but there was no definite plan. I was working two weeks offshore, three weeks back home when I started getting these emails from Shell at the Corrib gas plant. I didn’t know then but my wife had applied for a job for me back in Ireland.”

For the Corrib plant to give me a job all the way from Australia, and take a chance on me, I’m very fortunate. If they didn’t give me that job there was no way we could move back

Conscious of his wife’s ageing parents, the family decided to move back in 2013. “When I got the job with Corrib I didn’t really think about it twice. She got a really good job in a pharmaceutical company, and we had spent time with my family in Australia.

“There’s been a lot of bad press about the Corrib plant, which is fair enough, but for them to give me a job all the way from Australia, and take a chance on me, I’m very fortunate. If they didn’t give me that job there was no way we could move back.”

The family have now been living in Glasnevin for seven years. Murphy is the assistant coach at his daughter’s hockey club and helps out with the management of his son’s cricket team in Clontarf. “Cricket is Australia’s number one sport, so I find it a great outlet being involved with a game I love. There are some really dedicated people involved in both clubs trying to raise the profile.”

Murphy has settled well into life in Dublin and is now an Irish citizen. “I put the air conditioning on at 18 degrees Celsius; I love pork sausages, although I haven’t gone as far as eating a crisp sandwich; I love listening to John Creedon and watching his shows; I love going to Electric Picnic every year.

Murphy has found that, like the Aboriginal people of his own home country, Irish people have a real connection to their land. “In Australia you’re not really Australian unless you’re Aboriginal; the rest of us are from somewhere else. But here both our neighbours are Gaeilgeoirs, and to hear them speak Irish over the fence is brilliant. It comes from their deep connection to the land.”

Murphy does admit, however, to struggling with certain aspects of life on this island including the level of rubbish he sees on the streets of Dublin. “I find people are so patriotic in Ireland but they still throw rubbish on the ground. How can you love your country and litter at the same time?”

People have this perception of Australia as a Utopia of sunshine and sunny beaches, but where I’m from it rains more than here and the water temperature is the same as the Irish Sea

Australia has plenty of issues too, he quickly adds. “I think people have this perception of Australia as a Utopia of sunshine and sunny beaches, but where I’m from it rains more than here and the water temperature is the same as the Irish Sea. I don’t think any country is without fault.”

Murphy and his wife are glad their children, now aged 11 and nine, have strong memories of both their Australian grandparents and their Irish grandparents. “My grandfather was really pivotal in my life; we were close. I wanted my kids to have memories of their grandparents rather than just photos. And now they’ve got those memories of them in Laois. And my parents are young enough that they can still visit.”

Last year the family nearly moved back to Australia, after Murphy was offered a new job. But his children made it clear they would not leave. “I’d accepted the offer and given my notice, but the kids just didn’t want to leave. They’re full-on Irish and love Dublin. We’re here for the long-term now.”