‘I will never 100 per cent belong in Ireland’

New to the Parish: Teresa Buczkowska arrived in Ireland from Cracow in 2005 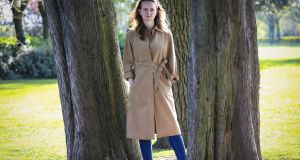 Teresa Buczkowska was 10 when her mother and four siblings moved into a shared apartment in a town outside Cracow, in Poland. The town, which had been constructed during the 1970s Communist era to house factory workers, consisted of a few apartment blocks and a small scattering of family homes.

Buczkowska and her family slept between two bedrooms while sharing a bathroom and kitchen with nine other families. “We moved there because we got social housing but it was absolutely horrible. It very much resembled what the Minister for Housing here is planning in terms of co-living spaces. I know it can never work. There are too many people with too many lifestyles.”

Buczkowska had spent the first decade of her childhood in the small town of Nowa Sarzyna not far from Poland’s southeastern border with Ukraine.

'I had always been committed to try and make it in Poland. I didn’t want to go. But it was perceived as silly if you had the opportunity and didn’t take it'

“We came from a very Catholic and patriarchal society. My mum was the first person to get divorced in our village and was very stigmatised. Everyone knew there had been alcohol and violent abuse involved, but my mum was blamed for breaking up the family. Poland didn’t have much social support for single mothers at that time; we relied a lot on goodwill, friends and family.”

After school, Buczkowska moved to Cracow to study social anthropology and ethnology at the Jagiellonian University. “I was lucky enough that higher education was free so we didn’t pay tuition fees. I felt really happy that I managed to get to university because it was kind of a prestigious thing to do in Poland. My mum always gave us a lot of freedom to be who we wanted to be.”

In May 2004 Poland joined the European Union and almost immediately Buczkowska’s friends started moving to Ireland. “Growing up in Poland migration had always been part of our experience – pretty much every family had someone abroad or had experienced someone leaving.

“People were quitting jobs as nurses and teachers to come to Ireland. I had always been committed to try and make it in Poland. I didn’t want to go. But it was perceived as silly if you had the opportunity and didn’t take it.”

In June 2005 Buczkowska’s friend called from Ireland to try to convince her to move over. She initially refused but when her mother found out she insisted Buczkowska try living in Ireland for a while.

“She said I had to go, that I had no choice and that my family relied on me. I was angry with her at the time, she was cutting my freedom to study for one more year. But I had to do it, it was an opportunity for my family to earn more money.”

Buczkowska arrived into Busáras on a cold, wet June evening after spending 48 hours travelling by bus and boat from Poland.

She moved to Naas and spent nearly a month dropping her CV in to local shops and restaurants, eventually finding work in a warehouse packing promotional boxes of beer. “It wasn’t great in terms of rights and conditions. I could speak a little English, and I knew I could get a better job that complied with regulations. I wanted better working conditions and opportunities to learn.”

'It’s the patronising perception that migrants are poor and neglected and unable to fight for their own rights. Migration is only one area where we need more diversity in leadership'

Buczkowska moved on to a job in a pizza restaurant, a coffee shop and finally a butcher’s shop. She enjoyed living in Ireland and decided to spend longer in the country. “The comfort of life was something I’d never experienced before. Getting a pay cheque every week, even at minimum wage, I could pay my rent and bills. I know a lot of people struggle on minimum wage but coming from my situation, where you had to count every penny, I suddenly felt like the richest person in the world.”

Buczkowska started volunteering at a Polish cultural and information centre, where she discovered a passion for community work. She wanted to develop her career in this area but with Ireland falling into recession there were no positions available in the sector. Fortunately Buczkowska managed to hold on to her job in the butcher’s shop throughout the economic downturn.

She started sending CVs to the Immigrant Council of Ireland but was unsuccessful in all her job applications. Eventually the persistence paid off and in 2013 she was hired as an integration intern with the council.

“It was a huge risk because I was working full-time in a coffee shop and the internship paid very little. But I went for it and took on an extra job as an usher at an arts centre. It was exhausting but I was relieved to finally be doing something I really enjoyed.”

Buczkowska was initially struck by how few migrants actually worked in NGOs. “All the people working in the sector, they are extremely committed and hardworking and deserve huge credit. They built the structure, and we owe them a lot. But it’s the responsibility of all of us to hand this over to the next generation of people who are directly affected by these issues. It is changing but the diversity is usually at lower level; management is still very Irish.”

Buczkowska is now integration manager with the council. Despite being a migrant herself, she is conscious that she comes from a European country and subsequently is more privileged than people who move to Ireland from outside the EU. She often feels frustrated that many people on this island still believe migrants need someone else to speak on their behalf.

“It’s the patronising perception that migrants are poor and neglected and unable to fight for their own rights. Migration is only one area where we need more diversity in leadership but it is the one we need to start from. The ultimate goal of any social justice work is to empower the rights holder, and there is no better way of doing that than passing on the leadership.”

After nearly 15 years on this island, Buczkowska considers Ireland home. However, she still feels a strong affinity to her Polish roots. “I live between two worlds and don’t fully belong to either. I will never 100 per cent belong in Ireland because there is that element of otherness. I still have a strong eastern European accent and I’m not ashamed of it, I’m proud of it. I can be an Irish resident and a Polish person.

“I never really made a conscious decision to stay in Ireland, life just goes on. I was 22 when I arrived, I’m 37 now. In a couple of years I’ll be longer in Ireland than in Poland.”

We would like to hear from people who have moved to Ireland in the past 10 years. To get involved, email newtotheparish@irishtimes.com, @newtotheparish