New to the Parish: Tatjana Klemanskiene arrived from Lithuania in 2008 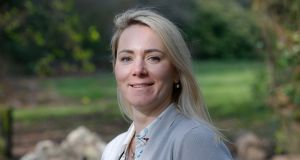 Tatjana Klemanskiene, originally from Lithuania, believes most employers were reluctant to hire a woman with a disability. Photograph Nick Bradshaw/The Irish Times

On her very first day in Ireland Tatjana Klemanskiene put her baby son in the buggy and went for a walk around her new neighbourhood in Celbridge, Co Kildare. She was surprised by the number of strangers who said hello and smiled as they passed her on the street and returned home impressed by the welcoming nature of the people in this small Irish town. However, when she mentioned these encounters to some acquaintances who had also moved to Ireland from abroad they shook their heads.

“I was warned not to think all the people who smile are actually happy to see you. They told me there were lots of people who didn’t like foreigners. But in my experience, during my 10 years in Ireland, I’ve only met one person who didn’t like me because I was foreign. It only happened once so I’m happy about that.”

Klemanskiene was 27 years old when she convinced her husband they should try moving to Ireland for a few years. He was working as a warehouse manager in the Lithuanian capital of Vilnius and Klemanskiene had recently given birth to their son. However, when a friend came to visit and spoke positively of his new life to Ireland, Klemanskiene felt the urge to move her young family abroad.

“I don’t know why I had the feeling or where it came from but since I was 16 I always wanted to go abroad. I didn’t have an exact place in mind, I just wanted to go somewhere else.”

In 2008 Klemanskiene’s husband left for Ireland and his wife and 11-month-old son followed a short time later. “I was nervous, not scared,” remembers Klemanskiene. “It was a new place with new people so I was hopeful and believed everything would be okay. We had nothing to lose.”

The trio moved into a house in Celbridge which they shared with two other Lithuanian families. “That helped a lot because the other families had children so I got a lot of help with my son. Sometimes I think if I had moved in with other people who were not so kind and friendly I would have had a very different experience. But it was brilliant.”

When rental prices started to go up, the family moved to Edenderry in Co Offaly where they could afford to rent an entire house for themselves. However, Klemanskiene’s husband struggled to find stable work and eventually they moved back to Celbridge. Klemanskiene felt it was important to be around for her son’s early years and stayed at home until he turned three but then she started looking for work. She took a course in office administration, similar to studies she had already completed in Lithuania, and began applying for jobs. However, despite her enthusiasm she was rejected for work placements. Klemanskiene believes most employers were reluctant to hire a woman with a disability.

‘I thought my life was finished’

Klemanskiene was 22 when she lost her right hand in an accident. She underwent rehabilitation and learned to write with her left hand but it was a long and arduous road to recovery. “I don’t want to speak to much about what happened, at that time I thought my life was finished,” she says as her eyes fill with tears. “It took about two years to recover. The clinic made me an artificial hand but I didn’t like it so I decided to stay as I am. When that thing was attached to me it kept reminding me about what happened.”

Fast forward nearly a decade and Klemanskiene found herself in a situation where she was being assessed for jobs based on the fact that she only had one hand. “I felt disappointed because I really wanted to do something and I knew I could. I’m a hard worker and I like to work, to help people and to earn money. I didn’t want to be sitting at home waiting for my husband to come back, that’s not me.”

Klemanskiene eventually approached the Fás training and employment authority who helped her apply for a course at Maynooth University. From there she applied for work experience at two separate offices. At the first office she found staff were too busy to help the new employee and struggled to understand the system. Fortunately the second work placement at an estate agent’s office in Celbridge was totally different.

“When I started the job the girls in the office were brilliant. They were friendly and kind and willing to help. The people around me helped me to believe in myself.”

After completing her work experience Klemanskiene was offered a job and nearly seven years on, she is still working at Team Lorraine Mulligan estate agents. “At first I was worried about my English and was afraid to answer the phones. But Lorraine tells me I’m brilliant. I’m so grateful that she gave me the opportunity to show I could work. She’s also so understanding. If the kids are sick she will say children are the priority, you do what you need to do. The ladies in that office, Siobhán and Shirley, they helped me with my fears and I will thank them all my life for that.”

“When I was younger I thought office work was boring and I would never do it. But I’m happy with what I’m doing. I’d also like to learn something new to build my career and feel more confident.”

Klemanskiene now has two sons aged 11 and four. She speaks Russian, her native language, at home with the family but sometimes feels bad that her children don’t speak Lithuanian. “I feel a bit guilty because they can’t speak proper Lithuanian. I can speak Lithuanian but it’s Russian with the boys because my family are Russian speaking.”

The family recently travelled back to Lithuania following the death of Klemanskiene’s father. “It’s sad because of the distance with family. Even with all the technology we’re not meeting each other, we don’t have the close relationship we could have if we lived in the same city. When we moved here I didn’t miss my parents too much. But now I’m older and my dad is not here anymore, I feel I do miss them.”

“I don’t think of Lithuania as my home anymore, I don’t have that feeling. I’m happy here, my life is here now.”