New to the Parish: Daniel Pereira first arrived from Brazil in 2005 one week before his 16th birthday 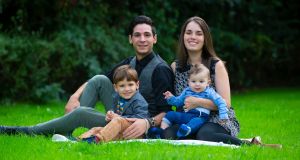 It was January 2018 and Daniel Pereira had just finished his shift at the local restaurant in Gorey when he noticed two unfamiliar men at the back of the building. When they said “Daniel” he presumed they were mistaken. However, when his full name and the words “immigration officers” followed it was clear they were in the right place.

Pereira started to apologise for working, saying he needed money to support his family, but the men reassured him there was nothing to worry about and that they had come to sort out his immigration status.

“They said I had a deportation sent out in December and I hadn’t replied so they were going to help. They put me in the back of an unmarked van and said we’re bringing you to the GNIB [Garda National Immigration Bureau]. They were calm and polite but I was panicking.”

The officers first brought Pereira to his home in Courtown, Co Wexford, where they requested that his wife Beatriz also accompany them. “I got a bit hot-headed and said if you try to bring her too I’m not leaving. I said she was breastfeeding and couldn’t leave our kid with my mum. As we left one of the men, who had made a GNIB appointment for her the following week, said ‘see you next Tuesday Beatriz’, and laughed. I said ‘there’s no need for that’ and he went pale. He couldn’t understand how I’d recognise that joke.”

About an hour later, Pereira learned he was actually going to Cloverhill prison where he spent the following two weeks, while a team of lawyers, called on by his parents, worked hard to secure his release.

Pereira arrived in Ireland in December 2005 just one week before his 16th birthday, after his father - who had spent a year working in construction in the west of Ireland- called for his family to join him from their home in the town of Bertioga on the outskirts of São Paulo in Brazil.

They spent a year in Tuam before moving to Wexford where Pereira was enrolled in the local secondary school.

“Gorey was a lot more inclusive than Tuam, they were used to having more people from outside. Of course people used to insult me but they didn’t have much experience of foreigners. As they got more understanding they realised they couldn’t generalise me with other people. They literally hated me at the start just because they didn’t know me. It feels like an accomplishment, that people who once disliked me are now on my side.”

Pereira’s mother applied for asylum for the family shortly after arriving in Ireland but they did not move into direct provision as Pereira’s father was earning a salary through construction work. As an asylum seeker, Pereira was unable to afford the international fees for third level education so he found a job as a waiter when he finished school. Even though it was illegal for asylum applicants to work at the time, Pereira found employment through friends in Gorey. However, after witnessing a raid by immigration authorities at a local restaurant, he became increasingly nervous about his status.

“I knew they could simply tell me I wasn’t meant to be working and bring me to jail. In my mind if immigration turned up I’d just run.”

Pereira spent the following few years working as a waiter and a chef in a number of Gorey restaurants. In 2013, his older brother, who had chosen to return to Brazil with their father following their parents’ divorce, bought a one-way flight for Pereira to São Paulo. Unaware that his asylum application would be thrown out if he left the country, Pereira decided to return home for six months. Upon arrival he was called up for military service and spent the following year going through a series of tests to join the army. He was eventually dismissed because of a shoulder injury.

In 2014 he met his future wife Beatriz and the following year the couple were married. “I always told her I wanted to go back to Ireland and that’s kind of what clicked [for] us. She was sick of our town in Brazil, it was a little place with no progress and everything was corrupt. If you didn’t know the right places you never go forward, you are miserable.”

The couple arrived back in Ireland in 2015 on tourist visas hoping to restart Pereira’s original asylum application. He quickly learned he was no longer eligible for protection under his mother’s application – she had received temporary permission to remain during his absence – and reapplied for leave to remain for his wife, and son Ethan, who was born in 2016.

Two years later, he received the visit from the immigration authorities. “Being inside prison wasn’t the hard part, what broke me was seeing my son through the glass window at the end of the first week. I couldn’t even touch him.

“The only good thing was the guards didn’t treat me like an inmate, they said ‘you’re not meant to be here’. The inmates were the same; they said ‘if you went to school here and work here then why are they doing this to you?’”

Upon his release, Pereira discovered his belongings, which had been confiscated when he was arrested and included his wedding ring, a necklace from his brother and his phone, had gone missing.

More than a year on, Pereira is still in regular email contact with the Irish Prison Service in an attempt to track down these missing items. His deportation order has been revoked and he is waiting for a decision on his immigration claim, which now includes his five-month-old son Eóghan, while working in home refurbishments.

“I’ve had a lot of sleepless nights but I have to stay strong for my wife and kids. People in Gorey know about my process and ask if there’s anything they can do. Everyone in the community is supportive, even people who were my enemies in school have signed petitions to keep me here.

“I have panic attacks but try to hide them from my wife. I’ve been made to feel like I don’t belong in Ireland by people who don’t know what I’ve been through or what I’ve achieved in this country where I am included as a member of the community.”