‘I moved from Australia to be a nurse in Ireland. People are always asking why’

Peta Guthridge arrived from Australia in 2015 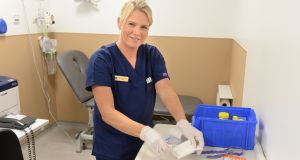 Peta Guthridge is frequently asked by her patients why she moved to Ireland for work. Many Irish people are confused as to why an Australian nurse would choose to work in Dublin when so many nursing graduates are moving abroad for better pay and opportunities, she says.

“I generally laugh when people ask that question. They’ll ask straightaway before any other question. ‘What are you doing here, are you chasing an Irish man?’ I just say we like to be a bit different; I’ve never been one to follow the norm.”

Guthridge’s strong Aussie twang can also cause confusion at work. “I think they probably find my accent a challenge, particularly when I get tired and slur my words. But some patients also have thick country accents and I find that hard. I nearly need flashcards.”

When Guthridge’s husband was offered a job in Ireland, the Australian nurse presumed it would be easy to find work in her field. However, it took 12 months to complete the nursing registration requirements before even travelling to Ireland. After that, there was a four-month wait to secure a work visa plus another year until Guthridge finally started working.

“I suppose I hadn’t really done the full research, I didn’t think it would take so long. It was pretty funny because they wanted everything via mail and post, not email. I had to get so many things posted over from Australia and they certainly did many reference checks and with the Garda checks it took 12 months in total. We thought it was a great opportunity. A lot of people move abroad in their 20s but we did it in our 30s.”

Guthridge still remembers the momentary regret she felt as she stepped off the plane in Dublin Airport on a wet and windy December day in 2015. “I’m thinking ‘what have I done’. I had my whole life packed into two suitcases and it was so cold.” The couple were lucky enough to find a large two-bedroom apartment, something Guthridge now realises is increasingly difficult in the context of the ongoing housing crisis. “I know that rental properties are really hard to come by here. Also things like setting up a bank account or how to find your local supermarket, you don’t really think about that before you move.”

Guthridge’s husband, who works in tech, often teased his wife for taking an 18-month gap year from work while she waited for her work permit and searched for a job. She used the time to visit friends and family back in Australia, travel around Europe and joined the Leinster Netball Club. “I had never taken time off because I finished secondary school and went straight into an undergraduate bachelor in nursing. I think it was really good career wise, just to refocus and regroup.”

While Guthridge appreciated the break, she admits the job search did become frustrating. “It got to the point where I made it a ritual to call up the nursing board every Friday just to see where I was at. It was the unknown of ‘is this really going to take so long’.”

Guthridge was eventually offered a job as a nurse in the emergency department of the Mater Private Hospital in Dublin. Having previously worked in a public-sector hospital, she was relieved to work more sociable hours in a slightly calmer setting. “We’re in a really nice position here where you have the time to actually talk to patients instead of the rushed care and time pressures that you have in a more public setting. Privately, you have the time to ask the patients about themselves and spend that time with them, which is really important.

“I suppose comparatively you see a lot more high-acuity, unwell patients in the public system. We only take a certain amount of patients per day and provide a smaller service. But it’s really well-run in here.

“I think the majority of the time our patients are happy with their care and they’re very grateful. Even the thanks you get; we often get thank you cards, hand-written letters and chocolates. And the way to a nurse’s heart is definitely food.”

She recalls how patients in the Australian public hospitals would often spend up to 24 hours on trolleys. While she has not yet witnessed this in Dublin, she is aware of “huge strain” around beds that exists in Irish public hospitals and the nurses’ pay disputes earlier this year. “I do think nurses are underpaid but unfortunately it’s just the way the dice is rolled, particularly with nursing and teaching. It’s like that in Australia as well. I don’t know what’s going to put things across the line. It’s one of those careers that you would think it’s a big thing to be dealing with someone’s life.”

Guthridge has noticed many similarities between her new Irish home and life back in Australia. “I do compare Dublin a lot to Melbourne, it’s just a smaller size and scale. We’re big foodies and we love eating out in restaurants. There’s lots of pubs and bars and parks and open spaces here. You also get great concerts and bands coming through. I feel like we’ve transitioned fairly well and comfortably.”

With her two-year work permit set to expire in August, Guthridge is about to begin the arduous and lengthy process of securing an online appointment with the immigration office in Dublin and applying for a Stamp 4 visa. “I’ve been told there’s emergency appointments that come up at certain times and heard something about appointments on Facebook although I’m not sure how reputable that would be. I’ve got a little bit of time left till it expires but I better get my skates on and starting clicking.”

The initial plan was only to spend two years in Dublin but four years on, the couple have no plans to leave. “If any family became sick we’d move back to Australia but we’re really enjoying it here. Our families have stopped asking when we’ll move back.

“My mum’s always been of the mind to say follow your goals and do what you want to enjoy doing. But at the end of the day she’d be fairly happy if we do move home. I just don’t know when the end date will be.”