New to the Parish: Felicia Olusanya (Felispeaks) arrived from Nigeria via France in 2003 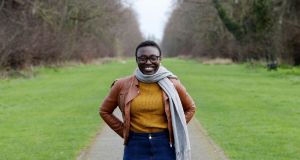 Felicia Olusanaya moved to Ireland from Nigeria with her mum when she was 7 years old. Now 23, she works in marketing and is trying to make it as a full-time spoken word artist. Photograph: Alan Betson

Felicia Olusanya was 14 years old the first time she experienced racism in Ireland. She was leaving a youth meeting at the local church with friends when the group stopped off at the bowling alley to buy some sweets. Suddenly an older woman behind the till began shouting at the teenagers to leave the shop.

“The lady at the counter started roaring that our hands were dirty and that we were going to steal. We said we were just trying to buy sweets and there were white children coming in behind us doing the same thing, it was so confusing. I knew that this person was being racist but I didn’t dwell on it. It wasn’t permanently damaging.”

Olusanya admits that for most of her childhood she remained unaware of any discrimination because of her skin colour. When she was chosen to play the medicine man and wear tribal clothing in the primary school play she only felt excitement about acting on stage. “Thinking about it now it was stereotyping but I accepted it then because it was fun. I’m grateful that I didn’t understand racism as a child. I loved primary school; I learned the tin whistle, I was in the National Children’s Choir and I sang in the National Concert Hall as a child.”

A few years later, in the first few months of secondary school, Olusanya got into a fight with another student after the girl pulled at her braids. “We had a lot of fights that year but I didn’t realise they were race induced until I was grown. I didn’t have the political language to pair with these things. And in a way I’m grateful I didn’t see it for what it was. I’m grateful I didn’t see it as ‘I’m different’.”

Olusanya moved to Ireland with her mother when she was seven. She had spent the first few years of her life in her grandfather’s home in Nigeria’s southwestern Ogun state. Her father moved to France when she was a toddler to find work and a few years later Olusanya and her mother followed. She quickly picked up the language but her mother struggled to adjust to the French lifestyle and after nearly a year the pair moved to Ireland where they claimed asylum. They spent about six months in the Balseskin direct provision centre before moving to Longford town when their application for refugee status was accepted.

“Some people from Nigeria had already moved to the town a few months before so we had a networking system. I don’t remember it being difficult, we had quite a close-knit community with all the other black people there. The familiarity helped us to settle down.”

In Longford, Olusanya felt like she existed between two Irish worlds – life with her mother at home and in church and life with friends at school. “I was firmly rooted in both realities from a young age so I was aware of both sides. I learned how to balance accents and balance what is acceptable to different groups. Being in a small town you got the odd looks here and there and the odd racist experience but it wasn’t glaring, it wasn’t too much in your face.”

At secondary school, Olusanya built friendships with girls from Irish, Polish and African backgrounds. While the bullying didn’t continue beyond first year, she sometimes felt more comfortable among friends who also had black skin. “I remember we formed this little space under the large stairwell that we called Little Africa or LA. It felt like a safe space; a place where you could be loud and not be looked at weirdly. I don’t know if it’s part of being Nigerian, or part of being African, but we tend to be very exaggerated with our expressions and sometimes people look at you like ‘what’s wrong with you?’ So we found a place where we could do that without being glared at.”

After school, Olusanya moved to Maynooth where she studied English and sociology at university. “College was amazing. I loved that I had to learn responsibility and become an adult really quickly. I’ve never moved home since first year, not even for the summer. I threw myself into the deep end and just kept paddling, even when I was broke. You just learn how to keep going.

“I’m really glad I ended up in Maynooth, if I’d been in Dublin I think I would have turned out different. Maynooth has the amazing duality of being both a small town but a big college.”

Shortly after leaving for university, Olusanya’s father moved from France to Ireland to be with his family. “We fought a lot at the start. It was like ‘you just have a title, I don’t know you’. Whenever I went home in the following couple of years he would sit with me explaining his side of the story and trying to get to know me. At first it was difficult because his ego was in the way but eventually he softened up. We have a great relationship now.”

While in college, Olusanya began experimenting with spoken word poetry. Growing up she always jotted words and sentences down in what she called her “book of thoughts”. However, sharing these reflections with a public audience felt terrifying at first. “I’d never shared my thoughts before and the format of spoken word was quite new to me. It was amazing but really scary. I still get nervous every time but as soon as I step on stage I feel peaceful.”

Olusanya now regularly performs at spoken word events around Ireland and goes by the name Felispeaks. She works part time as a marketing assistant but hopes to earn enough from her gigging to become a full-time performer. “Either I’m a dreamer or I’m crazy because I’m jumping with both feet and that means there isn’t a permanent or secure source of income. But this is what I love doing. I definitely want to expand abroad and I’m hoping the next few jobs will spiral into more work.”

Despite her interest in performing overseas, Olusanya hopes to base herself in Ireland. “I hate that it feels like to be better you have to leave this country. It’s like you become more valuable after you leave. But why aren’t we valuable right here, why aren’t we kicking ass? Considering this country is, by its seams, held together by poetry? Poetry and music are the cornerstones of Ireland, I wish we took them more seriously.”