‘I’m as proud to be Irish as I am Kurdish’

New to the Parish: Tayan Gaedi arrived from Iraqi Kurdistan in 2005 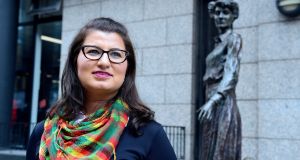 When most of us reflect on our early childhood years, our memories tend to be blurry and almost dream-like. For Tayan Gaedi, the experience of crossing the mountains from Iraqi Kurdistan into Iran by horseback when she was just five years’ old is clear as daylight. It was 1991 and hundreds of thousands of Iraqi Kurds were making the perilous journey over the border into Iran and Turkey, fleeing chemical weapons, torture and oppression.

“I remember it so clearly. My dad decided to get two horses; he and my brother went on one and me and my mum on another. But my mum couldn’t stay on the horse because she was scared of heights. My dad and brother disappeared and then we were on our own.”

Gaedi, now in her early 30s, pauses before continuing the story of her family’s odyssey into Iran. She is occasionally interrupted by her mother, who prompts her daughter on any missing details from the harrowing tale, reminding her of the moment she nearly drowned as they crossed a fast-flowing river. The family eventually made it into Iran where they spent a month before returning home to Iraqi Kurdistan.

When she was a teenager, Gaedi’s family moved to  Libya where she completed her secondary education and began studying to become a doctor

“It was almost like a ghost city when we went back. There was no water, all the schools were totally destroyed and Iraqi soldiers had broken into many houses. We only had one or two hours of electricity a day.”

In the years that followed the Gulf War, coalition forces in the landlocked Kurdistan region worked to build a safe zone for the hundreds of thousands of returning refugees. However, instability in the region continued, with violence becoming widespread during the Kurdish civil war in the mid 1990s. “I remember one time we went to have a picnic and were sitting down to start when suddenly we heard bullets and fighting. For a long time, people never went outside. The only good thing about all this was that it taught us how to play chess and cards because we were stuck inside so much.”

When she was a teenager, Gaedi’s family moved to Libya where she completed her secondary education and began studying to become a doctor. In the meantime, her father, who is a writer and poet, decided to move to Ireland and seek asylum for his family. Gaedi’s father spent time in direct provision before securing asylum and applying for his family to join him. Gaedi arrived in Dublin in 2005 and the family moved into a home in Firhouse in south Dublin.

While her younger brother could immediately enrol in the local secondary school, Gaedi was faced with the challenge of finding a way to continue her medical studies in Ireland. She applied to study in UCD but was told she needed to pass an English language proficiency test before joining the course. After she failed to secure the necessary marks in the exam, she applied for a Fetac course in nursing studies.

“It was very hard when I first came here. I don’t know how many months I felt depressed and was crying all the time. I’d spend three years of university studying to be a doctor but my English was really bad.”

Gaedi often felt frustrated during anatomy classes on the nursing course, which were a repeat of the information she had learned years previously. However, she says she learned a lot from the human development and psychology aspect of the course. “I was impressed by the healthcare teaching here and how it thinks about the human being. They think about the minimum need of the human and how it’s not just about physical healing, it’s about looking at the psychology and overall human well-being.”

In 2008, Gaedi applied for and was offered a place on a degree course in biomolecular science at the Dublin Institute of Technology. She initially planned to complete the three-year ordinary degree and then return to her medical studies but found she loved the course and completed an additional year to receive an honours degree.

“Even though I talk a lot and am friendly I don’t really like being surrounded by people. I like to be on my own and in the lab there’s a lot of research and thinking. Also, I’m more artistic and like to do things with my hands. Being in the lab feels like art.”

Following her graduation, Gaedi secured an internship with the Marine Institute in Galway. However, the position did not lead to a job and she returned to Dublin where she did a course in pharmaceutical technology. “It was the recession and it was so difficult to find a job. What made it harder was I didn’t have an Irish passport then, only travel documents.” When a friend suggested Gaedi apply for a role working with the Arabic market of a tech company, she decided to give it a go.

“The plan was to stay for six months and then find something else but I found I liked the environment. After university, all my friends got married or left the country but suddenly I was meeting people from the same background as me. I also liked that they paid me. It wasn’t a lot but I felt useful.”

In 2013, Gaedi and her family became Irish citizens. “I’m as proud to be Irish as I am proud to be Kurdish. Being Irish has opened a lot of doors for me. I tell people now I’m Irish-Kurdish.”

After 2½ years working with the tech company, Gaedi decided she needed to return to the science field and left her job. She spent her savings on a solo backpacking trip across Europe, visiting 18 countries over a year. “It was an amazing experience and I rediscovered myself. I realised that I was actually very brave and also a bit crazy. It was also really improved my confidence.”

Gaedi returned from her travels in 2017 and has been looking for a job ever since. However, she fears she may have to move abroad to find work. “Because there were no jobs when I graduated during the recession, many students went to do PhDs. So now in Ireland the level of education is much higher and every single job asks for PhD.

“I don’t want to leave my family. I know my parents are growing older and I don’t want to be leaving them. That’s the only thing that makes me feel sad.”