‘I love how Irish people talk. It’s like a soap opera with the banter and puns’

New to the Parish: Born in Taiwan, Agape Deng arrived in Ireland from the US 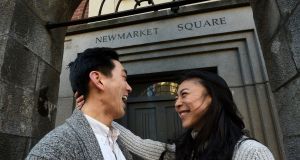 When people ask Agape Deng where she comes from the answer is complicated. Born in Taiwan, she spent most of her childhood in Russia before moving to the United States in her teens. And now she lives in Ireland.

“Outwardly I’m Chinese but constitutionally I loved the Russian culture,” says Deng in a strong California accent as we sip coffee in a cafe near Dublin’s city centre. Deng was two years old when her parents left their jobs in Taiwan to become missionaries and moved to the city of Rostov-on-Don in southern Russia. They later moved to Moscow and then St Petersburg. Her bother was badly bullied in his new school and their parents eventually decided to home-school their children for a few years before sending them to an international school.

The family lived a simple life in Russia and Deng recalls feeling jealous of her peers when they returned to Taiwan on holidays. “My dad was a dentist in Taiwan but he gave up his dental career to go to Russia. Every summer we’d go back to Taiwan and I’d see his colleagues had huge houses and cars and money. Meanwhile we were living in a tiny apartment with no hot water. But my parents are the happiest people I’ve ever met. I realised in my early teens that my parents had experienced something more valuable than material goods. That life was really attractive to me and I decided I wanted that too.”

Moving to the US aged 15 was a real shock for Deng. She felt totally disconnected from western culture and did not understand any of the references her classmates made to film, TV and music. “There’s a huge Asian population in southern California so people assumed I grew up there. But I had been living under a rock as far as media and popular culture were concerned, which is not a terrible thing. I’m really glad I grew up without a TV.”

Deng studied applied linguistics at the University of California, Los Angeles and then followed in her parents’ footsteps by taking a two-year postgraduate course in bible studies. “It gave me a really strong foundation in the bible and what it really says. It gave me a direction of how I wanted to live my life.”

She had moved to Dallas in Texas to study a masters programme in speech pathology when Deng met her brother’s best friend from college, Tim Wang. The couple began dating in January 2017 and were married in August of that year.

Wang had always had a fascination with Ireland and was studying medicine at UCD when the couple met. With three years of his studies left to go, Deng had to choose between living apart from her husband or dropping out of her masters. Eventually she decided to move to Ireland. “I had my parents’ blessing which I totally didn’t expect because they’re academics. But they were supportive because they saw it not as dropping out but as transferring my studies to Europe. ”

Deng arrived in Ireland on August 11th, 2017, just six days after she and Tim were married. She had successfully applied for the Go Overseas scholarship which covered the entire cost of her tuition at Trinity College where she studied a masters in speech pathology. “Languages are like people; they have personalities, histories and quirks. Because I spoke Russian, Chinese and English from a pretty young age I could always pick up when others had an accent but didn’t know how to describe it. That’s why I took linguistics at college.”

Deng immediately felt at home in Dublin where she quickly made friends. “Irish people love talking. I can talk to people on the bus and they’ll tell me their life story. I also love seeing Irish people talk amongst themselves, it’s like watching a soap opera. They’re so quick on their feet with banter and puns. When my co-workers talk it’s so interesting. It’s high brow one second and low brow the next.”

Deng recently submitted her masters thesis and is now working for a children’s speech recognition start-up. Wang is due to complete his medical studies in six months but the couple are worried about whether he will be able to secure an internship in an Irish hospital. While there are 727 internship posts available for graduates only 15 of these are open to non-EU international students. Deng is worried they will have to move to the UK if he does not secure one of these positions. Having invested hundreds of thousands of dollars in his overseas education, Wang is determined to practice as a doctor in Ireland.

“International students who go through the medical programme here have an additional incentive and motivation and I would even say loyalty and emotional investment in this country. There’s also a very real financial investment for foreign students. We hope we’re not just being used as cash cows who are milked of their money and then they don’t care where we go afterwards.”

Like many other foreign nationals living in Ireland, Deng has become increasingly frustrated with the online visa application system. She recently secured an appointment to renew her visa after logging in three times a day every day for two months. “I started logging in around 11pm because one of my colleagues said that’s when he got an appointment. Checking in the middle of the night helps too. It’s disruptive for your life. I heard there used to be a line out the door for these appointments but now that line is invisible which is worse. The problem can’t be seen. ”

Despite her husband’s struggle to secure an internship and the delays in securing a visa appointment, Deng is very happy in Ireland. She describes these negatives as “a cloud” but adds that she grew up in Russia so “inefficiency is not new to me”.

“We’ve gotten used to the damp and wetness, we’ve embraced it. Sometimes in moments of despair we ask was it a mistake to come here but then we realise we wouldn’t change any of our decisions. When people ask us where we’re from and we tell them they always say ‘why’d you move, are you crazy?’ And maybe we are. Other people move for sensible reasons – better prospects, higher quality of life, better weather. But we didn’t make calculations, we just fell in love with the country and the people.”

‘I love how Irish people talk. It’s like a soap opera with the banter and puns’