‘I feel like I’m always new in Ireland. Every good friend has moved away’

New to the Parish: Juliana Vasconcelos, a bridge design engineer, arrived from Brazil in 2015 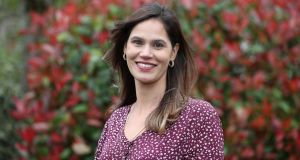 Juliana Vasconcelos, an engineer from Brazil who lives in Rathfarnham. Photograph: Nick Bradshaw

When Juliana Vasconcelos was in her final year of school she decided to become an engineer. In a single-parent household in Brazil with a mother who suffered from depression and struggled financially, there was never any expectation that Vasconcelos would go to university.

“My brothers and I grew up without a family structure. My father left my mother when she was pregnant with me and only visited us to bring food. Because of this we all became very independent early in life.”

Vasconcelos started working part time in McDonald’s when she was 16. In her senior year of school, she decided to join a group of friends at a career fair for the Federal University of Minas Gerais, the main third-level institution in her home state.

“None of my family or relatives had gone to university so I was curious. I loved maths and physics in school and attended a presentation by the department of civil engineers. The lecturer explained the top-performing student would be given the opportunity to complete a double degree with a university in France. From that moment on I dreamed of becoming an engineer.”

As the university was one of the most highly regarded institutions in Brazil, Vasconcelos knew she needed to work hard to even have a chance of getting in. While her schoolfriends enjoyed the freedom of life post-school, Vasconcelos spent the following 12 months studying for the entrance exam.

Determined to pass, she worked from 6pm to midnight each day in a pizzeria to pay for private tuition. She would wake at 5.30am, attend class, study in the library for the afternoon and then go back to work.

“It was an intense year. I only got three to four hours sleep a night and had no social life. Many people advised me to give up, but I believed in miracles. I wanted to go to university so badly, that’s what kept me going. I didn’t want to accept that my life would be just be working in a pizzeria. I wanted more.”

In 2008, Vasconcelos was accepted into university. She initially struggled with the workload but by the end of the first semester was scoring top marks. She worked during university holidays to cover costs and used a research scholarship to pay for French lessons in the hope that she would make it to Paris. In 2011, she was accepted into the École des Ponts ParisTech and won a scholarship to study abroad.

“The first year in Paris I felt alone and it was hard to adapt. My family were so far away and were never much good at communication, so we didn’t speak much.”

In Paris, all subjects were taught in French. However, to graduate from the degree, Vasconcelos needed to also pass an English exam. Through a contact in her local church in Paris, Vasconcelos met a South African family based in England who helped her spend her holidays in Britain to build up her language skills.

On her first sitting of the exam she failed and returned to Brazil in 2014 without a French degree in her hand. “I had one more semester in Brazil to complete and decided to use the money I’d saved from my scholarship to pass the English exam.” With only four months left to take the test, Vasconcelos opted to move to Dublin, where she could acquire a visa quickly and attend a language school.

She arrived in Dublin in February 2015 and spent her first two weeks sleeping in the kitchen of two Indian men before moving into an apartment in Shankill. “There were 14 people in the house and my room was in the attic. There was only a mattress in the room, no bed, and I couldn’t stand in it.”

In June 2015, Vasconcelos passed the English exam and started looking for work as an engineer. “I naively thought that with my qualifications doors would open for me. But, without a work permit, it was next to impossible.”

She started working as a cleaner for UCD accommodation and then found a job as a carer for elderly people. “I got very frustrated, I was on holidays from English classes but could only find part-time work. I didn’t feel comfortable with the homecare work. I’d grown up in a very conservative family, and my mother wouldn’t let me go out when I was a child because I was a girl. So giving a shower to an old man was a huge thing for me.”

She eventually decided to move back to Brazil but decided to apply for an internship before leaving Ireland so she could go home with some professional experience. In September she secured an unpaid position and lived off savings while staying in the home of a family she had moved in with a few months previously.

“I was very depressed at that time, I had no one to talk to. My family had this idea that my life was perfect but I used to arrive home after the internship, lie in bed and cry until I fell asleep.”

Vasconcelos was scheduled to fly back to Brazil at the end of 2015 but in November of that year a job became available at the engineering company where she was working. Even though she was certain visa restrictions would make her ineligible for the position, Vasconcelos sent in her CV. A few days later she was offered the job on the agreement that she pay for and sort out the paperwork for her work visa.

She spent the following three years with the company before moving on to a position as a bridge design engineer with Roughan & O’Donovan consultancy, which was involved in building the famous Samuel Beckett Bridge. She is currently working on a project in Athy but she dreams of designing a structure like the Dublin bridge in the future.

Vasconcelos still struggles with loneliness and says many of her Dublin friends have left Ireland. “I feel like I’m always new in Ireland. Every time you meet someone and become good friends that person moves away.”

She is unsure how long she will stay here but says she is passionate about her work. “Sometimes I can’t believe that I work in an English-speaking country. I never planned it and I feel humbled. My advice to any girl who finds herself on a difficult path in life is to have the courage to shape your own future. Who knows what unexpected opportunities may come your way.”