‘I consider myself an Irish man but people always say: No, you’re not Irish’

New to the Parish: Salah Haddad arrived from Libya via Jordan in 1998 and became an Irish citizen in 2003 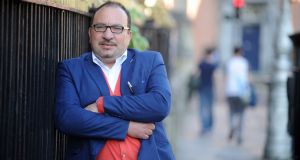 Salah Haddad from Libya has lived in Ireland since 1998 and became a citizen in 2003. Photograph: Aidan Crawley

Salah Haddad always introduces himself as Irish. He has lived in the country since 1998 and became a citizen in 2003. However, after two decades in this country he says Irish people still struggle to welcome him as one of their own.

“I consider myself an Irish man but people always say ‘no, you’re not Irish’. Whether it’s the colour of my skin or the sound of my accent or some other element, I do not belong. It’s this fear that people consume through many channels that newcomers will take our jobs and destroy our culture and lifestyle. That fear is very strong here.”

Haddad’s arrival in Ireland with his wife and young sons in the late 1990s was totally unplanned. Before coming to Europe he was studying in Jordan where he began writing in opposition to Col Muammar Gadafy’s political regime in his home country of Libya. In 1996, he was blacklisted by the Gadafy government for his views. “I couldn’t go back after that. I was part of the Muslim Brotherhood organisation at the time so our journey to Ireland was organised. Our only chance was Ireland so we came here as asylum seekers.”

The Haddad family arrived in Ireland two years before the direct provision system was established by the government to deal with the rising number of asylum seekers entering the country. They were initially placed in a hostel for just over a month and then moved into a small apartment in Smithfield in Dublin.

“It was my first time in a western society, in Europe, and it was a real culture shock for me because I was a religious person then who belonged to the Muslim Brotherhood. Everything was completely strange to me – the culture, the society, the people, the language.

“When I came to Ireland I didn’t speak English. It’s not easy to learn English as an adult, especially when you don’t have a background in the language. When we were in Libya Gadafy forbade learning western languages. I had to start from zero.”

Haddad spent his first year in Ireland learning English through the Spirasi asylum seeker support group and then moved into private classes. The family spent a lot of time during their initial years in Ireland in the Clonskeagh mosque. However, Haddad was determined to send his sons to Irish national schools. He wanted them to speak English with native speakers and become immersed in Irish society. The children did not attend Arabic lessons at the mosque and Haddad chose not to speak his native language at home with the family.

In 2006, Haddad completed a part-time master’s degree in intercultural studies at DCU. He hoped to find a job as an intercultural consultant or adviser for universities or colleges but ended up working as a translator and teaching Arabic. It was during his DCU studies that Haddad began to move away from the Islamic religious traditions he had practised up until that point in his life.

“Even before I came to Ireland I was obsessed with how Europeans had advanced where as the Middle East seemed to go backwards. I came to Ireland as a foreign Arab who had never really left his country and it’s a striking reality when you see an advanced society living a peaceful life with better education, better schools and better services.

“When I came to Ireland I started thinking about this very deeply and reading more books about the Enlightenment in France, the revolution in America and the spread of ideas across Europe. I was always asking what makes them go forward and us go backwards. I came to the conclusion that one of the major reasons is religion. Religion plays a huge role in people’s mindsets.”

In 2012, Haddad made what he describes as the emotional rather than rational decision to move back to Libya. The Gadafy regime had fallen the previous year – with its leader killed after 42 years in power – and Haddad was optimistic that he and his family could start a new life in a new Libya. However, the move to Tripoli placed a huge strain on Haddad’s four sons who only spoke basic Arabic and who had not seen the country since their infancy (his youngest son was born in Ireland). Haddad was unable to find an affordable school where his children could learn through English and struggled to find work for himself.

“If you want to be a decent person you don’t have a chance in Libya. You have to be corrupt to find ways to live a better life but that was against my personality and my values. Security and stability were very bad. We stayed a year but in the end, for the sake of my children, we decided to come back to Ireland.

“It was a shocking experience for my children because they didn’t have the language and the culture was so difference. They were traumatised by that year. They’re very strongly connected to Ireland, their relationship to Libya is zero really. They’re Irish. It was a huge relief for them to come home.”

His oldest son is now in his final year studying business at university. He found a job last year as a Deliveroo delivery man but struggled for years to find part-time work to supplement his studies. “His fear now is how to get a job when he finishes college. He was always trying to get part-time work but was refused because of his name. He speaks English with an Irish accent, he came here when he was two years old. But his name does not sound Irish so the answer is often negative.”

Haddad is currently doing a PhD on slavery in Arabic literature while continuing his full-time job with a health insurance company. He has written a number of novels and this month published a book on multiculturalism in Ireland. “After 20 years in Ireland I think it’s enough to have your voice heard by Irish society. I wrote this book to say to the people of Ireland, particularly the politicians, that multiculturalism will not become a reality in our society unless there is a greater socio-economic balance among all groups in society.

“I’m happy because my children have a better education and better chances here. But I don’t want to live in a deluded society where the government tells us we live in a harmonious, multicultural country because that’s not the truth. Our struggle for a better life is still going on. That is the major task for us.”