Forced marriage: ‘That man had more rights over my body than I did’

New to the Parish: Dalal Alshohaib arrived from Saudi Arabia in 2015 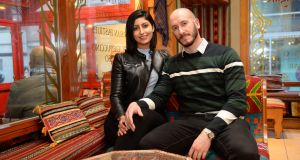 Dalal Alshohaib was 14 years old the first time she wore the hijab. She was living in the United States at the time and found the head scarf uncomfortable. Like most teenagers, all Alshohaib really wanted was to hang out with friends but the rules in her home were strict and spending time with foreigners was frowned upon.

“I felt I identified more with the American culture being raised there. Going back to Saudi Arabia to a more fundamentalist form of Islam was something I could not cope with.”

When she was four years old Alshohaib’s family left Saudi Arabia to spend a year in the US. They returned when she was eight years old and remained in the US until she was 15, spending time in Kentucky, Mississippi and Alabama as her parents pursued third-level studies around the country.

Each summer the family would return to Saudi Arabia for the holidays. “When I got on the plane to go back I always said it was like a time machine travelling back in time. The differences between the two countries were extreme.”

When she was 18, and back living in Saudi Arabia, Alshohaib was introduced to her future husband. The following year she was forced to marry the man.

“He was 10 years older than me and it was my relatives who forced the marriage. My parents were supportive of the union and I felt abused.”

“It was brutal, I spent an entire year crying every single day. That man had more rights over my body than I did. It was one of the worst periods of my life. He would threaten me by saying I’m going to marry a second wife and I was like, ‘great, that means less time with me’. I won’t have to suffer being around someone I hate.”

Eventually, Alshohaib revealed her misery to her mother-in-law and asked that she try to convince her husband to agree to a divorce. “I told her there’s not a chance you’re getting a grandchild from me, I want to divorce your son. I’m lucky that she was a good woman. In Sharia law all it takes is one sentence for him to end the marriage, he just has to say ‘I divorce you’. It took him three years to do it.”

The pair started to build an online friendship and eventually Alshohaib convinced her father to allow Van der Veken to visit the family home. She had always considered her father the less conservative of her parents and told him she was eager to meet her new friend in person.

“That was the day everything blew up. My dad realised there was a romantic interest between us and that the potential for marriage was on the table. I’d never even dated someone before and he went berserk. He decided no way you’re marrying a foreigner.”

Despite her father’s opposition to the relationship, the pair continued to meet in secret. In 2014, Alshohaib began applying for master’s degrees abroad and was accepted into a course in management and marketing at University College Cork.

She arrived in Ireland to begin her studies in August 2015 and a few months later Van der Veken followed her to Europe. He moved to Dublin and found work with a food company that provides ingredients to high-end hotels.

After completing the theoretical part of her course, Alshohaib also moved to the capital to carry out the internship component of her master’s. She subsequently found a job and was hired as a digital marketer on a critical skills visa.

“I got really lucky and have the most amazing boss in the world. When I told him about my situation, and with my student visa about to expire, he took me on. It wasn’t charity but he didn’t have to do that. Kindness is something that keeps coming up in this country.”

When she first arrived in Ireland, Alshohaib’s father believed his daughter would return to Saudi Arabia once she completed her studies. He did not realise that unless he accepted his daughter’s relationship, she most likely would not come back.

“Things between us escalated quite badly after I moved here and I had to seek support from mental health professionals to figure out what was happening to me.”

When Alshohaib’s father started seriously urging his daughter to return to Saudi Arabia, she sought legal advice and went to the gardaí.

She also says she recorded one of her father’s phone calls. After presenting the audio to gardaí, Alshohaib was told her father would be restrained from seeing her if he travelled to Ireland. She has now cut ties completely with her father.

Alshohaib is focused on developing her career in marketing and hopes to apply for Irish citizenship. “Ireland is home now, we’ve been building roots here for nearly three years. I feel a sense of loyalty to this country. I want Irish citizenship so I can feel more secure and stable.

“I have to continue working through the lifetime of abuse I’ve suffered but obviously the main thing is I feel safe. I can go out and carry on with my life without feeling the need to look over my shoulder.”