‘Cork is a very rebellious city. Going there was the best thing I ever did’

New to the Parish: Alexandra Soares arrived from Brazil, via Germany, in 2015 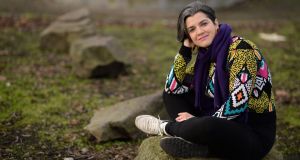 Alexandra Soares: ‘I am very privileged because I was already fluent in English when I arrived.’ Photograph: Dara Mac Dónaill

Growing up in Brazil, Alexandra Soares never felt like she identified with the culture of her home country. In Rio de Janeiro, she found that young women were expected to lie on the beach in bikinis and listen to Samba music. Soares was more interested in darkness and mythology.

“I was too ashamed of my body to go to the beach and I didn’t identify with Samba and football, all the things that Brazil is known for. I didn’t fit in. But then after I left Brazil I was confronted with how Latin I really was; how Brazilian I was for being so open and emotional and needing contact and warmth.”

Soares’ goal when she was younger was to make a living as a singer. From the age of 15 she wrote her own songs and played with a number of bands.

She made some money from her music but over time realised she could not survive off her meagre finances. She studied a degree in astrology and worked in a number of different jobs but eventually decided she needed to go abroad to learn more about herself.

“I felt like in Brazil I was living in a bubble and I wanted to see life for myself and search for independence and freedom; all the things I could not find in my own country.”

Soares spent a few years saving up and when her brother announced he was going to travel around Europe she decided to join him.

After visiting a number of European capitals the pair arrived in Berlin and Soares decided to stay.

“There was no particular reason why I picked Germany. Berlin was the cheapest city I found, I wanted to experience another culture and see what I could accomplish on my own without my parents’ help.”

Soares started learning German and found a job with a start-up. However, she struggled to settle into her new German home. She felt many people looked down on her because she could not speak the language fluently.

“For the first time I felt what it was like to be ‘othered’. They identified me as a Latin woman so whenever I tried to speak German, even in the supermarket, they would reply in English. I felt I could not express myself to my full intellectual potential and felt excluded from society.”

After five years in the city, Soares decided to return to education and applied for an MA in women’s studies at University College Cork. Thanks to her European grandmother, Soares was able to travel on an EU passport and was eligible to pay EU fees for the course. “I have to realise that I am very privileged because I was already fluent in English when I arrived. I wasn’t here to learn the language, I came here to improve my curriculum and to study. And the masters in Cork was amazing.”

Soares arrived in Ireland in July 2015 and spent the following 18 months living in the southwest while she completed her studies. “Cork is a very rebellious city and I love that energy. Going there was the best thing I ever did for myself.”

Soares enjoyed the course at UCC but was unhappy to see a lack of diversity among the teaching staff. “There’s a whole department for Latin American studies and it’s taught by an Irish woman. I also had no women of colour teaching me about black feminism and black movements.”

Despite her love of the city, Soares also found it difficult to find her place in Cork. “From my personal observations I think Ireland is very protective of its own culture. While there is an openness and kindness towards people from abroad, there’s also inner circles. Even with my fluent English and my European passport, I still find it very hard to understand people culturally here.”

She felt the same about Dublin when she moved to the capital after graduating and landing a job with a tech company. “I find that Dublin is a horrible place to be sociable. People are here for a small amount of time and most of the people I know – they’re Brazilians and foreigners – are here to accomplish an objective in a small timeframe. They’re working and busy with their lives.”

Soares likes working in Dublin but says her late night shifts are not conducive to building relationships and getting to know people outside the office. “I have a decent paying job that I really enjoy at a good company. But I’ve been doing these shifts for almost a year and it’s hard. It makes it difficult to have a social life here.”

Soares recently returned from a trip to Brazil, having spent Christmas with her parents in Rio. She describes feeling deeply apprehensive about going home for the first time since the election of Brazil’s new far-right president Jair Bolsonaro in October.

“I tried to hide myself and not be as a queer as I am. It’s the country that kills LGBT people the most. Trans women are in danger, cis women are in danger, bisexuals and lesbians too. Everything related to femininity, even feminine guys are in danger. It’s a patriarchal, misogynistic society that wants you to perform femininity in certain ways and when you don’t, you have to be punished for that. And now Bolsonaro supports those ideas so people feel entitled to be violent.”

Soares misses her parents and worries about living so far away as they grow older. “My best friends and parents are in Brazil; those relationships are priceless. I would love to be able to go back to my country and be able to feel as safe as I do here as a woman. I wish I could be as independent in Brazil as I am here. You’re always looking behind your back, it’s paranoia.”

However, for now, Soares plans to stay put. “I’m doing very well in my job right now and there is a possibility of growth there. I can’t just throw that all up in the air and make another harsh decision to leave.

“It’s always a struggle to live abroad because everything you know and love is back in your home country. But you have to find new things to love, otherwise you get lost. And then you’re just living to make money. That’s not a life.”