Meghan Markle has delicate ankles. I fear for them on the Temple Bar cobbles 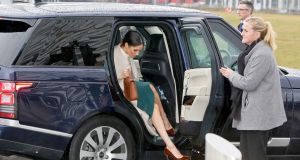 I read that Meghan Sparkle and Prince Harry are to visit Dublin for a two-day “mini-moon” after their May nuptials. It’s probably best not to go rushing out to buy yourself a Union Jack fascinator just yet, however, as the visit is unverified, and anyway I tend to find my news in quite obscure places, such as under the cat lit. But should the starlit couple hit the Irish capital, it’s understood that their itinerary will include visits to galleries and historic sites as well as, apparently, some lyrical moments spent “getting lost on its meandering, haphazard streets”.

As one well versed in getting lost on those haphazard streets, occasionally by going into a bar through one door and exiting by a surprise second, only to find myself surrounded by a bevy of kitchen porters having a back-door smoke, or by being obliged to circumnavigate some bloke urinating against a giant wheelie bin, I have to say that the “getting lost” experience is not all it’s cracked up to be.

1 Mary Robinson’s former home in the heart of Ranelagh for €4.5m

6 Ireland ‘on track’ to further ease restrictions in May, says Varadkar

8 Q&A: Covid vaccine side effects – What are they, who gets them and why?

9 Unionism not emotionally ready for conversation about united Ireland

12 Newton Emerson: London and Dublin are making a problem of a solution

18 Tenant promises to pay compensation after removing rafters from house

22 Food and mood: Why nutritional psychiatry is attracting attention

23 Rugby Stats: Josh Van der Flier’s versatility keeps him out ahead of his rivals

24 Simon Zebo is heading back to Munster next season

26 Entropy and the relentless drift from order to chaos

29 We’ve all had a Von der Leyen moment, and it can leave you gasping

30 Maternity leave during lockdown has its advantages

32 My ex-husband wants me to sign away my land to him. Do I have to?

35 ‘They could have killed me’: Man pushed off bicycle while cycling at Sally Gap

36 Police officer who shot Daunte Wright to appear in court

37 ‘I could attach 10 years of sadness to a throwaway comment, and nobody would know except me’

39 No higher taxes, Hostelworld’s investor and Deka buys another building