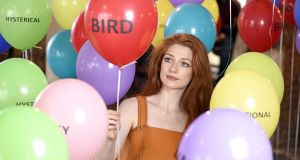 Don’t call me babe – well you can if you want, it wouldn’t bother me. But if a new campaign in the UK is to be believed, it really bothers some women, who are calling for a ban on words they find offensive.

A survey by Special K of over 2,000 women revealed that alongside “babe”, women also hate being referred to as “bird”, “doll”, “chick” and “queen bee” and are most offended by “hormonal”, “drama queen”, “bitchy”, “high maintenance” and “hysterical”.

The use of these words apparently causes much of my gender to feel belittled with thousands (aged between 16 and 24) saying their “strength as a female is undermined four times a day”.

Lord protect me from these easily offended “snowflake” girls who, instead of heralding equality (and let’s face it superiority), are actually making themselves appear fragile and, quite frankly, pitiful.

In a photo shoot, surrounded by balloons bearing the damaging words, the campaign was headed by ex-Girls Aloud star Nicola Roberts.

“It’s so important for women to grow up learning that you are not a ‘ball breaker’ if you are successful – you are simply a strong woman succeeding,” said the singer.

“It’s a strange thing that in a modern society we still have room for language that holds strong women back,” she added.

I’ve lost count of the issues which upset young women who seem to go searching for things to be offended by – if the media (both social and otherwise) is to be believed, these ladies are the most put-upon in society today – including that they are made to feel inadequate, not praised enough for their efforts and now, it seems, being called nasty names.

If equality is really where it’s at, what about all the words which men might find offensive?

Perhaps they don’t like being called a “hunk”, a “stud” or a “fine thing”. Maybe they don’t like being referred to as a “geezer”, a “git” or a “cad”. Or what about people suggesting that a man is “arrogant” or “cocky” because he is ambitious and wants to get ahead. Maybe thousands of men go home every evening feeling “undermined” by the words used to describe them.

Somehow I doubt we will see pictures splashed across the tabloids of a group of young men holding balloons with a variety of words they don’t like written across them.

It would be ludicrous wouldn’t it? And would make them seem weak and more than a bit pathetic. They would be a laughing stock. This is exactly what this campaign is doing for the women involved. Far from empowering them, it is showing them up to be over-sensitive, feeble and rather ridiculous.

There have always been issues regarding equality and for many years strong women fought hard battles to bring our rights and place in society on a par with men. And they did a fine job. Yes, there are still areas in which the scales are not tipped in our favour, but campaigns like the “Strength is . . . ” from Special K do more harm than good, encouraging a sense of entitlement and supremacy among young women.

In trying to strike a balance between the sexes, the problem has gone full circle with men often being treated like an inferior gender. Because at the same time some women are shrieking about inequality and bleating on about empowerment, they are using double standards with wild abandon.

Take advertising for example, would the Diet Coke adverts be allowed if the roles were reversed? Or what about the ad for Minstrels where two women sit guffawing in a theatre as they discuss male strippers on stage? And then there is the plethora of commercials in which women endure totally moronic partners who wouldn’t know one end of a washing machine from the other.

This also rings true in life – not only has it become acceptable but almost obligatory for women to berate their other halves to female friends – making derisory comments while an entire group cackles over some poor sod’s lack of intelligence in the kitchen or imagination in the bedroom.

What are we doing ladies? This is not the way to go about making the world a better place. We need to treat people as people regardless of gender – there are good, bad, bright and dim on both sides.

So for the sake of the next generation, stop making girls feel superior and instead instil in them a confidence which comes from knowing they are great – not because they are female but just for being themselves.