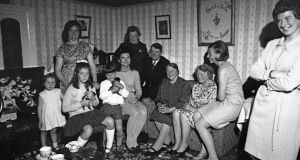 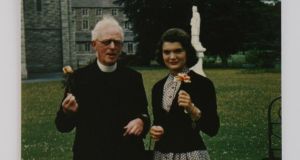 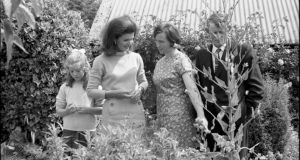 Chatting outdoors on the 1967 visit to the Kennedy homestead in New Ross. Photograph: Irish Photographic Archive/Lensmen 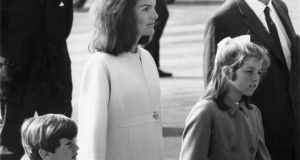 Jacqueline Kennedy and children John and Caroline arriving at Shannon Airport on their 1967 visit to Ireland. Photograph: Keystone/Hulton Archive/Getty Images

Jacqueline Lee Bouvier had established a separate – and little-known – relationship with Ireland before she even met the future president Kennedy. Her letters to Fr Joseph Leonard, who she met during a visit to Dublin in 1950, unexpectedly reveal a deep affection for Ireland.

In August 1950, the 21-year-old wealthy American student had just completed her studies at the Sorbonne in Paris and decided to go travelling before sailing home to the US. She arrived in Dublin with her step- brother Hugh “Yusha” Auchincloss and looked up family friend Fr Leonard.

She and Fr Leonard struck up an immediate and unlikely friendship, given the huge age gap. He was over 50 years her senior – aged 73 and living in semi-retirement at the All Hallows seminary in Drumcondra, Dublin. He effectively chaperoned her around the city and she attended the Dublin Horse Show, visited the Abbey Theatre, dined in the famous Jammet’s restaurant and shopped for Waterford glass.

Met taoiseach
Contacts in the US embassy, apparently, secured a visit to Government Buildings and a meeting with Fine Gael taoiseach John A Costello, who later recalled: “Miss Bouvier who was full of youthful vivacity and charm, delighted with everything she found in Ireland, and expressed the hope of coming frequently again.”

In her first letter to Fr Leonard, sent from Scotland in August 1950 after departing Dublin, she was already “miserable at leaving Ireland” and “homesick for it”. The priest wrote back to her in America – the start of a lifelong correspondence.

But history intervened: Declan Costello married Joan Fitzsimons, was elected TD for the Dublin North-West Dáil constituency in May 1951, and later became Irish attorney general and president of the High Court.

She returned to Ireland in 1955 as Mrs Kennedy – wife of US senator John F Kennedy, whom she had married in 1953. The couple stayed in “a great suite of luxurious pink rooms” in the Shelbourne Hotel. The taoiseach was abroad but had asked his son and daughter-in-law Declan and Joan Costello to host a dinner for the Kennedy’s at Jackie’s favourite Dublin restaurant, Jammet’s.

They also enjoyed, at the Shelbourne Hotel, “Mr Cosgrave’s lunch. How fascinating to see an Irish politician come in looking just as harried as an American one – with 59 places to go and not enough time to get to them all”. Liam Cosgrave was minister for external affairs, and later taoiseach.

They also went to the races in the Curragh, Co Kildare, “past rolling stud farms, one of which was for sale and Jack had to drive and look at it. It seemed at that moment so perfect, you could only live in Ireland forever”.

In a letter written after the couple returned to America, Jacqueline recalled the Dublin trip of 1955 and told Fr Leonard: “You will never know how much our visit meant to both of us – of all the places we’ve ever been together that was – always will be – the best . And why? All because of one person whom there is no one else like on this earth – you.”

It had been: “A fairytale visit that was too perfect to be real – to walk back across the green [St Stephen’s Green] with you, and throw coins into the fountain so that we would be sure to return to Dublin.” They never did together.