From acting, casting and designing to writing comedy, novels and poetry, these women’s artistic endeavours have a wide influence 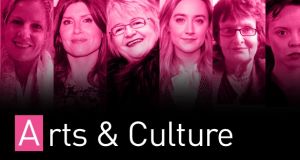 The success of Brooklyn, driven by Ronan’s beautiful performance, has elevated her to another level. She has emerged from the novelty of kid-actor to a fully fledged leading woman. Over the next year or so, Ronan will appear in the Irish-heavy cast of Loving Vincent, about Van Gogh, a film adaptation of Chekov’s The Seagull, she’ll revisit Ian McEwan’s writing by playing Florence in On Chesil Beach, and will star in Greta Gerwig’s Lady Bird.

This month, she’ll make her debut on Broadway in The Crucible, before turning 22 in April. Where Atonement saw the camera transfixed by Ronan’s stare, Brooklyn showed her subtle dexterity in conveying emotion in the tiniest of movements. With her down-to-earth interview presence, Ronan is leaving the diva antics to others, while she concentrates on her craft.

Horgan is one of the finest comedy writers and actors in television at the moment. Her searingly honest and astute style is bold, boisterous, and full of heart. Pulling, the cult hit on BBC that debuted in 2006 which Horgan co-wrote with Dennis Kelly, brought Horgan into the spotlight.

In 2012, another BBC comedy Dead Boss, which she again co-wrote and starred in received great reviews. In 2015, the splutteringly hilarious Catastrophe debuted on Channel 4, created, written by, and starring Horgan and Rob Delaney. It brought her legions of new fans, with its brilliant relationships realism. Her new creation, Divorce, hits HBO this year and stars Sarah Jessica Parker and Thomas Haden Church. American television offers bigger opportunities, budgets, stars and viewers. There pressure might be there, but so is the talent.

Even the most casual cinemagoer can’t have failed to notice casting director Ros Hubbard’s name at the front-end credits of several Hollywood films: among them Lara Croft, Four Feathers and Enemy at the Gates.

Born in Ranelagh, Hubbard moved to the US in the 1960s, and worked in casting in Los Angeles and New York. Returning to Dublin, she opened a model agency with two partners, Simone Judd and Christine Davies. Soon after, she met her husband John Hubbard, and they moved to London, where they had two children.

Hubbard returned to casting in England; and John left advertising to join her in their casting business. Moving from commercials, they first worked on The Max Hedroom Show on TV and The Commitments in film. Hubbard is based in London but travels the world, taking time to occasionally stop at her Dingle cottage. Her children have since joined the family business.

“It helps, but there isn’t such a glass ceiling in our business any more. Look at all the women commissioning editors in television. The major producers/directors are increasing, and much better female parts are available now. People advance because they are hardworking talented or brilliant whether they are male or female. and luck or opportunity has a bit to do with it as well.

“Get in and be indispensable and there comes a day when you have to pretend you can’t type or file or that’s what you might be left doing. Don’t gossip, keep your powder dry and to thine own self be true.”

Originally from Longford, McKeon lives in Brooklyn, New York. She has been living in the US for 10 years but still has a “close connection” with Ireland and spends part of the year here.

She uses the internet and social media to keep up with what is happening at home – she believes this technology has changed the experience of Irish people living abroad.

McKeon’s novels and stories are mostly set in Ireland and she believes living abroad has made her better able to write about the country. Distance, both geographical and emotional, is a theme that appears frequently in her writing and something she describes as a “preoccupation”.

Her debut novel, Solace, won the 2011 Geoffrey Faber Memorial Prize, the second novel, Tender, was published last year and was shortlisted for the Novel of the Year award at the Irish Book Awards.

“I think social media is making a huge difference in the creation and communication of solidarity between women, and in its sustenance. This became obvious for many in the arts late last year with the Waking The Feminists movement.

“In online movements like Everyday Sexism, Read Women, women are telling each other that they have their back, and that’s starting to sink in, to become part of the daily way of looking at the gameplan and at its challenges.”

“A quote I read in a Helen Mirren interview, not very long ago: ‘At 70 years old, if I could give my younger self one piece of advice, it would be to use the words ‘f**k off’ much more frequently’.”

“I’d roll out a phrase I’ve been seeing everywhere for the past while, and with which I wholeheartedly agree: ‘Carry yourself with the confidence of a mediocre white man’.

Which is not to say, be mediocre. But rather, look at how self-assured so many of the mediocre guys are. Chances are, you’re pretty brilliant. So why the hell would you be self-censoring, or apologetic about yourself? Get out there.”

As one of Ireland’s foremost female poets, Boland has spent much of her career examining the experience of womanhood. Her poems often touch on issues relating to domestic life and the roles of mother and wife.

The “lives and the achievements of women” she believes “are absolutely essential in themselves and to a society, and there needs to be vigilance to make sure neither they nor society lose out by have those overlooked”.

The daughter of a diplomat, Boland spent much of her childhood in London and New York, returning to Dublin at the age of 14 to attend secondary school in Killiney, Dublin.

She went on to study at Trinity College in Dublin and published her first collection of poems while still a student.

She is married to the novelist Kevin Casey and has two daughters and a grand daughter. For the past 20 years, she has worked at Stanford University in California where she is the director of the creative writing programme. She describes the university as “a great meeting place for ideas and innovations”.

While she feels at home in the US, Boland says she loves “getting on that plane back to Ireland”, which she does every 10 weeks and also spends every summer here.

Her latest volume of poetry is A Woman Without a Country (Carcanet Press).

“This was once a commonplace. I think its origin was in the perception that if a woman held a challenging or senior job she must have had to work harder to prove herself and her suitability must have been incontestable. I still feel there’s truth in that and across many jobs, not just senior ones.”

“It does exist. I’m in the arts so it’s been very powerful to see how women’s lives have translated into women reading and writing poetry, fiction, non-fiction. That has shaped a conversation which is itself a form of solidarity and I’m often been inspired by that.”

To what extent is it becoming easier for women to succeed in her field?

“The last decades have been enriched by powerful, defining writing in poetry and fiction and non-fiction by women. There’s no doubt at all that women have found it easier to set their own agenda in these forms than they once did.”

“The greatest problem for someone starting out in writing is perfectionism. Younger poets, fiction writers, can become so self-critical that it prevents them striking out again and failing again.

“For young women in the field it can radically affect their confidence. They need to get used to more failure than success. And they need to know that the second come straight out of the first.” – Jennifer Duggan

Milan-based, Dublin-born Nuala Goodman is an artist whose work straddles art and design. She studied painting at NCAD and after college moved to Milan where she worked with the founding father of Memphis, Ettore Sottsass, painting anything they asked her including a motorcycle and the inside of a silk nightgown.

She worked with other Italian household names, collaborating with Alessi on a series of painted boxes, while Evem, a watch she designed for Swatch, is now a collectors item.

Goodman collaborated with contemporary furniture company Moroso on an exhibition at the Venice Biennale in 2010. She painted portraits on the backs of an edition of 10 chairs designed by London-based James Howett – two now sit in U2’s Dublin offices.

While looking for a venue to show her Paintings From Milan series, she met with Daniela Ferretti, director of the Fortuny Museum in Venice, housed in the designer’s palazzo. It was a lucky break that, at the time she didn’t really recognise and almost turned down. “When I was offered 300sq metres of an exhibition space at the Fortuny Museum in Venice, my first response was to ask if I could think about it. There was a pause from Ferretti who advised not to think about it too long as the gallery was full for the next five years.”

“When I was a student at NCAD, Nigel Rolfe, the performance artist, was a guest lecturer and one morning he took the class on a five-mile run. We lagged behind him all the way. When we got back he said, ’your life is 50 per cent mental and 50 per cent physical’. I’ve never forgotten it.”

“Cultivate an inner stability that doesn’t depend on material rewards. You will hear a lot of nos. When I first moved to Italy I wasn’t that confident in myself as a person. It is something you can learn.”

The dark attic lit up by a little interior inspiration
5

Tanya Sweeney: It was never my place to ask why she wanted to die
7