Irish Women of the World: Google’s Anne-Marie Farrell and five other tech titans

To celebrate International Women's Day, we've found an outstanding bunch of Irish women whose influence is felt around the world. Here are the women rising to the top of the previously male-dominated computer and technology industries 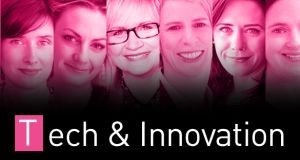 After school in the Loreto College, Bray Co Wicklow, Farrell studied electronic and computer engineering at NUI Galway before starting her career with a three-year stint as a management consultant with professional services firm Accenture. She joined Google in 2006 and has worked in a number of areas including strategy, business analytics and finance. In her current role, she leads the ‘Customer Journey’ team at Google in Mountain View, California, enabling small businesses around the world grow their businesses online.

Farrell also runs Startuponomics, a Dublin-based conference for Irish start-ups to which she invites some of the world’s leading thinkers on human behaviour.

“As an engineering graduate, I’m definitely biased and always recommend students to consider studying engineering – it opens up doors to multiple careers including accounting, data science, marketing and of course engineering.

“Consider the current investment companies are making in big data today. Marketers are now expected to develop personalised campaigns targeted to a customer’s needs. Engineering gives you the skills to develop these data-rich, innovative and creative marketing programs.”

Armagh woman Sinead O’Sullivan’s career has been genuinely out of this world. Having graduated with a degree in aerospace engineering from Queen’s University Belfast in 2008 she went to Georgia Tech’s Aerospace Systems Design Laboratory.

Her subsequent research work, which included Nasa’s Mars mission and the creation of robotics for the US navy, led to her appointment as research fellow for the US Centre for Climate and Security, focusing on space technologies.

She is also co-lead in Space Technologies for Disaster Management at the Space Generation Advisory Council, researching Unmanned Aircraft Systems – drones - for natural and humanitarian disasters.

This last fits in particularly well with the day job. O’Sullivan is chief executive of AviOptX, a satellite and drone company, which she runs while studying part time for an MBA at Harvard Business School.

“Having a technical background – engineering or science – is the easiest way to get involved, however, there are lots of roles that are not engineering-centred. My space friends are a diverse group – space lawyers, artists, designers, someone has to make the spacesuits. The only requirement for this industry is having a curiosity about the world we live in.

“This sector is going through a phase of exciting change and evolution – the main players in this industry are changing and so there are huge opportunities to make a difference. Just be willing to take risks and be creative. It’s a very exciting time to be in the aerospace industry, and being flexible enough to react to the changing landscape is necessary.”

Anita Sands is one of only 39 directors under the age of 40 serving on the boards of US publicly traded companies. She is a director of cybersecurity firm Symantec, IT company Service Now and Pure Storage, a fast growing Silicon Valley start-up. She is also an adviser at Grand Central Tech, an NYC tech incubator.

From Termonfeckin, Co Louth, she holds a PhD in physics from Queen’s University and was a Fulbright Scholar. She was executive director of Carnegie Mellon’s Software Industry Centre and a research fellow at the Munk Center for International Studies at the University of Toronto.

After moving to New York as head of transformation for global technology and operations at Citigroup, she joined UBS Wealth Management, ultimately becoming its group managing director. She is a member of the International Women’s Forum.

“Women hold themselves back with a kind of ‘invisible hand’. I’ve seen this happen to some incredible women and over time summed it up as the three As – women don’t ask for everything we need to be successful, including enough support at home; women don’t advertise our skills, accomplishments or potential nearly as often or as quickly as men do and women are sometimes afraid to be authentic – in the past we tried too hard to fit into a corporate culture that was predominately created by men, for men.

“I’ve been fortunate to be the beneficiary of wonderful female mentors and to participate in great women’s networks. What’s been even greater, particularly in recent years, is just how increasingly engaged men are becoming about the need to actively to support diversity and inclusion. But we have a ways to go yet. As someone once said, we know we’ll have reached equality whenever there are mediocre women at the top!”

Máire P Walsh has just picked up a ‘40 under 40 Irish in America’ accolade and it’s easy to see why.

The Castlebar native left Ireland in 2002 having followed up school at St Joseph’s with a string of third-level qualifications, including degrees in marketing management from Limerick Institute of Technology, business enterprise from the University of Wolverhampton and a masters in business studies from NUI Galway.

“I left Ireland really because of a sense of adventure. I wanted to travel and explore after college but I never imagined I’d still be in San Fransisco after so many years,” says Walsh, who now is digital strategy director of Subdirect, a specialist marketing company that helps drive subscription sales for magazines.

To date, Subdirect has delivered more than nine million print and digital subscriptions to more than 2,000 titles. Walsh combines her role there with her position as lead digital media instructor at Berkeley Advanced Media Institute.

Does female solidarity exist and, if so, how has it helped her?

“For two years I was president of Exceptional Women in Publishing, an organisation whose mission is to educate, mentor, and advance women in leadership roles in media. Members of the organisation have a genuine drive to support and guide each other in their careers. This example of solidarity helps fuel confidence, a passion to lead by example and acts as a reminder to always empower and educate other women when possible.”

“When you have an opportunity to build a new skillset, join a board, or move outside your comfort zone – embrace it.”

Designer and founder of Designers Accord

Nominated by Fortune magazine as a ‘Guru you should know’, Irish designer Valerie Casey moved with her family to America as a child. “We still have a home in Dublin where my parents live part of the time and my sister and her family live in Cork.”

Having studied English and psychology at Swarthmore College in Pennsylvania, Casey gained an MA in cultural theory and design from Yale University, where she was awarded for outstanding academic achievement.

A frequent panellist at World Economic Forum events and conferences, including Davos, she has been one of its Young Global Leaders since 2011.

In 2007, she founded the Designers Accord, a global coalition of designers, business leaders and educators working to create positive environmental and social impacts. To date, more than half a million people from 100 countries have participated in the Designers Accord.

Heralded as one of the world’s most influential designers by Business Week, Casey, a former chief product officer at Samsung’s Global Innovation Centre in San Fransisco, now advises a range of companies from Fortune 500s to start-ups and NGOs.

“Yes! Gender discrimination is still alive and kicking in 2016, even in the so-called meritocracy of Silicon Valley. Incredibly, the bias is so deep in our culture that women have been found to routinely devalue the skills of their own gender at a similar rate as men.

“As awareness has grown about this unconscious bias, new studies from McKinsey, EY, and Catalyst have uncovered an empirical link between gender diversity and increased profitability.

“This is no longer a discussion of fairness or preference, it just makes better business sense to include women because diversity overwhelmingly increases creativity and innovation.”

Is there a good piece of advice she received along the way?

“The best advice I’ve received is to fall in love with the problem you’re trying to solve, not the solution you’ve built.”

Dee Forbes is president and managing director of Discovery Networks Western Europe, based in London. The Drimoleague, Co Cork, native studied history and politics at UCD before moving to the UK in 1989 and beginning her career with advertising agency Young and Rubicam.

She spent 14 years with Turner Broadcasting, part of Time Warner, becoming general manager of Turner in the UK and Ireland. She left to join Discovery Networks in 2010 and now manages all commercial and channel activities for Discovery Networks Northern Europe’s business.

Chair of the Commercial Broadcasters Association in the UK – and a former non-executive director of the Irish Times – she is on the board of children’s charity ChildLine and Munster Rugby.

Is there good piece of advice she received along the way?

“Early on in my career my boss talked about her own career and how important contacts had been for her. The idea of networking and casting your net as wide as possible to get to know people in other departments, organisations and other industries was something that always stuck with me. It’s as important today as it was then as my industry is a people one and getting on with and knowing a wide circle is vital.”

“Find a mentor. Having someone you can trust as a sounding board, a confidant and an adviser is helpful and inspiring. This can be someone more senior than you in your organisation or another company or simply someone you admire and whose advice you would value and experience you would benefit from. Mentors have played a very important role for me over the years and now I get huge satisfaction from being a mentor myself .”

Great British Bake Off: How they got around social distancing in the tent
3

Back to school: We went into a tailspin when our eldest had a temperature
7