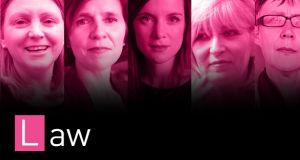 Síofra O’Leary is an Irish lawyer who was appointed a judge at the European Court of Human Rights in Strasbourg in 2015. The Dubliner was educated at Muckross Park College in Donnybrook – where she was head girl – and had an early interest in politics, debating and research. She studied at UCD and the European University Institute in Florence and has held fellowships at Emmanuel College at Cambridge University, the College of Europe in Bruges and the University of Cádiz in Spain.

Before moving to Strasbourg, O’Leary was head of union at the European Court of Justice. During her career, she has covered cases at the European courts relating to asylum, freedom of expression, equal pay, pension rights for female workers and European arrest warrants.

“Solidarity, in my experience, is not gender-specific, both when it exists and when it is lacking. It is the product of said professional generosity.”

“Having worked for many years in European institutions, I’ve observed that one’s ability and, crucially, work ethic, should, and generally do, determine professional progression. Your work speaks for itself. That is not to deny the demands of combining motherhood and professional life, or to say that professional women may be judged differently to their male peers: a woman, particularly one in a leadership role, can be regarded as hard or demanding when she is simply doing her (and a good) job.

Originally from Dublin, O’Hara began her career working as a lawyer with the Free Legal Advice Centre in Dublin after graduating from Trinity College. In 1994, she moved to Mexico City to join the United Nations volunteer programme as a young lawyer. Over the past two decades, she has worked with refugees in Guatemala, Kosovo, Burundi, Darfur, Syria, Afghanistan and the former Yugoslav Republic of Macedonia.

O’Hara says that although the UN struggles to meet and maintain gender parity at all levels, she has seen plenty of women rising up the ranks on the basis of hard work and commitment. She has benefitted from support from female colleagues over the years but has received just as much encouragement and support from her male colleagues.

“I came into the humanitarian field on the back of a law degree. That was particular to the specific area that I wanted to pursue but there is just as much need for doctors, accountants, logisticians and a whole range of other specialists. I was recruited through the United Nations Volunteer scheme, which is a great way to find an entry level position.”

What advice would she give to a young woman at the start of their career in this sector?

“If I was doing it all over again I would say focus on languages and try to learn as many of them as you can.”

European ombudsman Emily O’Reilly says “emotional intelligence and common sense” have been her main tools in developing her career in journalism and politics. Based in Strasbourg, O’Reilly, who is the first woman to hold the position of European ombudsman, says balancing personal and private life has been one of the greatest challenges during her varied career.

“The challenging part is when it comes to the emotional multi-tasking of family and career. That’s where ambition and biology may collide.” She says a significant number of women are now ombudsmen globally and adds that “perhaps it’s time to change the name”.

“Is there a valuable piece of advice she was given along the way?

“I gave it to myself when I was a desperately shy child. This, I remarked to myself, isn’t getting you anywhere. I realised at a very young age that the primary motivator of oneself is oneself.”

What advice would she give to a young woman at the start of her career in this sector?

“Your first employer may be irrationally impressed with your 620-point Leaving Certificate, after that it’s how you impress upon the world in everything else that will determine your trajectory.

Caoilfhionn Gallagher is a human rights lawyer at Doughty Street Chambers in London. Gallagher, who is from Portmarnock in Dublin, studied law at UCD and trained at the King’s Inns. She later taught in the UCD and Trinity law schools.

Gallagher has acted for the bereaved families and survivors of the 7/7 London bombings and is working on the Hillsborough inquests into the deaths of 96 Liverpool FC fans in 1989.

She also is currently leading the legal team working with Ibrahim Halawa, the 20-year-old Irish man who has been detained in Egypt for more than two years.

Gallagher was a consultant to the UN on children’s rights and child soldiers and has trained judges in Turkey on free speech standards. She also acts in cases before the European Court of Human Rights.

Gallagher has experienced “soft sexism” – colleagues suggesting to solicitors that they shouldn’t work on a case because they’ll be too tired – which she says is tricky to deal with, particularly when there is no boss to complain to. “Advice on navigating my way through those problems came from the many brilliant, supportive women who I am privileged to work with.”

Is there a valuable piece of advice she was given along the way?

McInerney-Lankford has published widely; she is an adjunct professor at American University – Washington College of Law and serves as co-chair of the American Society of International Law Human Rights Interest Group. Originally from Co Clare, she studied law at Trinity College Dublin and continued her legal studies at Oxford and Harvard universities. Prior to joining the World Bank, she worked in private practice in Washington DC. She is a member of the American Bar Association and admitted to practise law in the state of Rhode Island.

What would she say to someone at the start of their career in this area?

“It’s key at the outset to identify the cause one cares about the most and to develop one’s specialisation and expertise around that. Stay focused, read widely and publish. Go to the end of the subject, understand its central premises and its parameters, the points of conjecture, current controversies and debates and locate the challenges and opportunities it presents. It’s important also to recognise the integrity of more technical career paths – these can be among the most enduring and fulfilling. And if you are serious about studying law, first read Karl Llewellyn’s The Bramble Bush.”