Join us online for five nights of unforgettable debate, discussion, distraction and everything in between 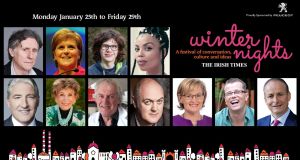 The line-up for Winter Nights, a new Irish Times online festival taking place at the end of January, was announced on Thursday. Over five evenings from Monday, January 25th to Friday, January 29th, a host of high-profile guests including writers, politicians, actors and activists will be in conversation with Irish Times journalists.

The line-up includes Scotland’s First Minister Nicola Sturgeon, who will be in conversation with Irish Times columnist Fintan O’Toole. Among the guests taking part are actor Gabriel Byrne, comedian Dara Ó Briain, writer Dara McAnulty, EU Commissioner Mairéad McGuinness and Irish-Nigerian academic and writer Emma Dabiri. The Taoiseach, Micheál Martin, is also on the bill. He will be talking about these challenging times for the country with Irish Times Political Correspondent Jennifer Bray.

International guests featuring in the festival – which is supported by Peugeot – include CNN’s Washington-based political pundit John King and psychologist and Holocaust survivor Edith Eger.

Among the hosts are Irish Times writers and editors Pat Leahy, Kathy Sheridan, Hugh Linehan, Sorcha Pollak and Patrick Freyne who will be in conversation with Ross O’Carroll-Kelly creator Paul Howard.

The Winter Nights Festival follows on from Summer Nights, The Irish Times festival which took place last July. The full programme, with up to three live events on each of the five nights, is below.

How to get tickets

Tickets for the festival are on sale here and would make an excellent Christmas gift for these pandemic times. They cost €25 for Irish Times subscribers, or €50 for non-subscribers. Ticket buyers will receive a link by email on the opening day of the festival, allowing them to attend the events on all five evenings via their phone, tablet, laptop or desktop computer.

Leading Through Lockdowns
With Micheál Martin and Jennifer Bray
Micheál Martin became Taoiseach at a time of unprecedented challenges. Irish Times Political Correspondent Jennifer Bray asks him about leadership in a pandemic and his hopes for Ireland in 2021.

Is everything going to be alright?
With Prof Luke O’Neill and Jennifer O’Connell
Professor of biochemistry at Trinity College Dublin, Luke O’Neill was one of the leading scientific voices to emerge in 2020. Irish Times columnist Jennifer O’Connell picks his considerable brain about the light at the end of our pandemic tunnel.

Talking with Ghosts
With Gabriel Byrne and Hugh Linehan
Dubliner Gabriel Byrne was one of Ireland’s first movie stars. He talks to Irish Times Arts and Culture Editor Hugh Linehan about his life and times from The Riordans to The Usual Suspects to publishing an acclaimed memoir at 70.

The American Dream?
With CNN’s John King and Fintan O’Toole
Just days after the presidential inauguration of Joe Biden, Washington-based CNN commentator John King talks to Fintan O’Toole about his Irish roots, his Magic Wall and the future of post-Trump America.

OK, Let’s Do Their Stupid Idea
With Paul Howard and Patrick Freyne
Ross O’Carroll-Kelly creator Paul Howard and Irish Times features writer Patrick Freyne are two of the funniest people writing in Ireland today. They talk to each other about the sometimes under-appreciated art of making people laugh.

Lessons for Living
With Edith Eger and Róisín Ingle
In conversation with Irish Times columnist Róisín Ingle, celebrated psychologist and Holocaust survivor Edith Eger explores ways to change the thoughts and behaviours that can keep us prisoners of our past.

What White People Can Do Next
With Emma Dabiri and Sorcha Pollak
Irish-Nigerian author and academic Emma Dabiri explores how, in the fight against racism, white people can move from allyship to coalition. She is in conversation with Sorcha Pollak, Irish Times journalist and writer of New to the Parish.

Two Men in a Zoom
With Dara Ó Briain and Pat Leahy
Comedian Dara O’Briain and Irish Times Political Editor Pat Leahy met and became friends as student debaters in UCD. They quiz each other about friendship, comedy, middle-aged angst, politics, space and much more.

A Walk on the Wild Side
With Dara McAnulty
“When young autistic people are nurtured, miraculous things can happen,” says 16-year-old Dara McAnulty, award-winning author of Diary of a Young Naturalist. The Co Down teenager explores his passion for the natural world.