'If all those people can do it, I can too' 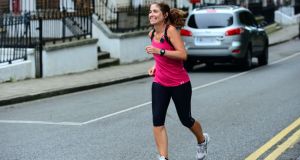 THIS RUNNING LIFE: Busy working mother Rachael Ingle (46) took up running in January this year with one goal in mind – to complete the Dublin Marathon

When did you start running and why?

I started in January 2012. I was inspired by watching the marathon runners in Dublin last year and thought it would be a good thing for me to do in 2012. Maybe it’s the age I am at but I’ve decided to pick one big project a year and this is the first one. Before this year I’d never run before so it’s been a revelation and very different to working out in the gym.

Where’s your favourite place to run?

I don’t have a favourite place really but the less hills there are the better. I mostly run around where I live in Dublin. I am not really bothered about scenery, I just keep my head down and keep going, although when I was on holidays in Portugal I packed the runners and it was great to experience different views.

Motivating my sister Róisín to also participate in the marathon. It was brilliant to see her go, like me, from couch to 10k which is the app we trained on together at the start. Now she has decided to walk the marathon instead of run it but I don’t care how she gets through it really as long as she crosses the finishing line. I hope we will both be in a fit state to have a celebratory energy drink together afterwards.

Finishing my first race in April, the Samsung 10km, under one hour in horrible weather without stopping. Talk about a baptism of fire. Actually the gales and lashing rain made me run faster because all I was thinking was “I badly want this to be over so I better get a move on”. For some mad reason I had cycled to the race so I felt very sorry for myself cycling home soaked to the bone, but also delighted that I’d kept going despite the conditions.

What keeps you going when things get tough?

My 11-year-old daughter Hannah’s voice in my ear saying how proud she is that I am running the marathon. She sometimes comes out with me for parts of my training and it has meant that both of us were even more interested than usual in the athletics at the Olympics. I’m no Mo Farrah, but there’s definitely a greater sense of solidarity when you’ve been out running longer distances yourself. You kind of feel you have the tiniest insight into how they must be feeling.

What are you training for?

The Dublin Marathon. When I watched it last year I just kept thinking “if all those people can do it, I can too”.

Are you a morning or evening runner?

Being a mother of three and managing director of a busy pension consultancy Aon Hewitt, the timing of my runs are dictated by whatever suits my schedule best that day. So morning or evening, it doesn’t really matter to me. I just fit it around meetings. At the beginning, before I was comfortable in my new runner status, I liked training in the dark in case I bumped into anyone. I am prone to what my sister calls “tomato face”.

What does your average weekly training consist of?

I have a spreadsheet pinned to the kitchen wall with a schedule that I made up myself. On average, it’s four times per week with the longest run on a Saturday morning. I am doing 14 miles now which I can’t believe considering I started back in January doing three minute runs. Rest is very important too.

Good and now I have engaged my husband to work as my nutritionist, it’s not his actual job, but he knows what works so I'm hoping now my diet will get even better. Having spent a lifetime avoiding bananas – I hate them with a passion – I now eat one before my longer runs. I refuse to take protein shakes though. Yuk.

Do you have a coach?

No apart from the app in the beginning that took me to 10k. It’s pretty much a solitary project which is a reflection on the way that I like to learn things. The only coachs I have are colleagues in work. We are an informal support network, keeping up with each other’s progress.

What do you wear on your feet?

Asics runners, a Christmas present from a former colleague to help me on my quest.

What’s on your iPod when running?

A selection of music by Squeeze, Abba, Gilbert O’Sullivan, Take That and Kylie. Don’t judge me.

Ever been chased by an animal?

Not yet. Does that happen to runners? Now I’m scared.

I pulled my gluteous maximus which was really painful. At least that’s what I self-diagnosed. I couldn’t walk properly for a week.

Nothing specific, everything always aches.

The person who gave me the runners told me running would change my life and said for her, it was a way of clearing her head. I’m still not sure about the life-changing aspect but I do feel fitter and have more energy. A really big positive is that I am now much more toned than I was before I started. On bad days, I sometimes question whether I took too much attempting the marathon in my first year running and wonder should I just have aimed at a 10k. But it’s too late for that now.

Just get out of the house and close the door behind you. If you are competitive, get a GPS device – Garmin is what I use – to measure your progress. Don’t think about it too much, just go for it and on really off-days keep your mind focused on the fact that every training session, however long, has to end some time. The best part for me is the joy I feel when the run is over and I am back inside the house under the shower.

Talk of Halloween is a welcome distraction but how will it work this year?
8