Founder of successful plant-hire company and a Fianna Fáil fundraiser 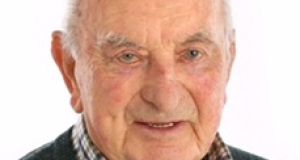 William O’Brien: He was a former director of Murphy’s brewery in Cork and was partly responsible for convincing Heineken to take it over

Willie O’Brien, who has died at the age of 89, was the founder of one of Ireland’s most successful crane- and plant-hire companies. A lifelong supporter of Fianna Fáil he had close connections with government when the party was in power.

Born in Glenflesk, Co Kerry, where his parents had a small farm and a shop, he was educated at Rockwell College. He was a humble man, devoted to his family and had a deep religious faith.

Every inch a self-made man, he was a true entrepreneur long before that title was in vogue. When he was 15, he set up a sweet-making enterprise in Glenflesk, and he created jobs by hiring local women to stitch foam into mattresses. In the early 1950s, he bought a truck and a JCB, setting himself up in the business of delivering and laying gravel.

It was a shrewd investment and produced rich dividends because by the time of his retirement he had amassed plant and machinery worth €15 million. The company, still in family ownership, now has a workforce of 72 with depots in London, Scotland and France.

He was a former director of Murphy’s brewery in Cork and was partly responsible for convincing Heineken to take it over. Famed for the punchy impact of such slogans as “Don’t risk it, let O’Brien lift it”, his distinctive yellow trucks, cranes and concrete-pouring equipment are a familiar sight.

He was a close friend of former taoiseach Jack Lynch and was active on the fundraising side of Fianna Fáil politics. He was also a member of now-defunct Taca (the Irish for support), the party’s fundraising arm institutionalised by former taoiseach Seán Lemass. Taca, which consisted of 500 businessmen – each of whom contributed £100 a year to the party coffers in return for privileged access to government ministers and attendance at a VIP dinner in the Gresham Hotel – was eventually scrapped.

A former employee of O’Brien’s, Gene Fitzgerald, was appointed minister for finance by taoiseach Charles Haughey in the early 1980s, a time of severe recession.

Having cut his teeth in an era when political victories were celebrated with bonfires at the crossroads, he was acutely aware of that old political truism – the vital importance of keeping in touch with the grassroots.

His political nous and shrewdness were legendary, qualities neatly illustrated in Donal Hickey’s biography of the late Jackie Healy-Rae. In that fascinating chronicle, The Mighty Healy-Rae, Hickey describes the scene at a vital byelection convention to select a Fianna Fáil candidate for the South Kerry constituency. “Part of the strategy in those days was to get popular backing, which would then influence delegates to vote for a certain candidate, O’Leary in this case. O’Brien thought quickly and went to a steaming chip wagon parked near the hall. He ordered 50 brown paper bags of chips drowned in white vinegar and salt, and told O’Leary and Healy-Rae to hand them out to dancers leaving the hall.”

Mr O’Leary duly won both the nomination and the byelection and served as TD for the constituency until his retirement.

Ten years ago, after examining the possibility of selling the company, his son William bought out his siblings and other shareholders, opting instead to expand the business his father had started.

Predeceased by his wife, Mary, who died on the day of their 56th wedding anniversary, Willie O’Brien is survived by daughters Monica, Maureen, Patricia, Sheila and sons William and Anthony.

Irish vet in Australia: I look at this wombat, snoring on my chest, the last I’ll raise
4

Is my drunken, abusive husband capable of change?
9

Make a move to Rialto: Dublin 8, but without the wave of gentrification
10