Footballer Oisín McConville: Gambling beat the sh*t out of me 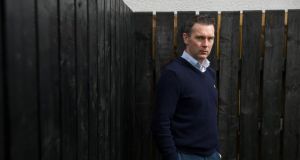 Fenced in: Oisín McConville would wake up in a panic. Photograph: Barry Cronin 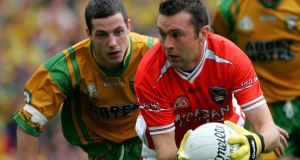 This is one of a series of articles by Patrick Freyne on winners and losers in Ireland’s changing gambling world.

At the height of his career as an Armagh footballer Oisín McConville was king of “the big hello”. “I wanted people to think I was cock of the walk, that I had everything going well for me,” he says. “If I met someone in the street it would have to be almost a high-five sort of thing, because I didn’t want people finding out where I was at. I didn’t want people finding out that gambling was ripping me apart, that all the things that as a human being you hold dear – the self-respect, the self-esteem, the integrity, the honesty – all that was f***ing gone.”

McConville, who is now 39, has been free of gambling for 10 years – and had a lot of time to think about it all. At school in Newry he felt like the only place he belonged was on the football field. “Gambling was the other situation in which I felt in control,” he says. “I felt I could go into a bookmaker and feel at home.”

Before long McConville was building up large debts. “I took over a pub, and I wasn’t paying suppliers, and I was getting overdrafts and multiple car loans and credit cards. My brothers would see me running the pub, and they’d be saying to me, ‘How could you be struggling to pay bills? This place is flying.’ They were on to me, but compulsive gamblers are compulsive liars.

“I was always pushing money around. You get to the point where you’re keeping 20 plates spinning in the air,” he says. “The insanity of it was that I always felt I was one bet away from sorting out my financial problems. I now know that if I won an insurmountable amount of money I wouldn’t buy jeans or a car: I’d punt it on the next race.”

McConville didn’t want to hear anybody questioning his behaviour. “I remember taking a mate of mine gambling, and he looked over my shoulder when I was writing a slip and said, ‘F**k, take it easy on that.’ I said, ‘Jump in the car,’ drove him back to his house and then went back gambling on my own.”

When the bookmaker in his home town told McConville that he thought he was developing a problem his solution was to go to bookies in Dundalk and Dublin. “I’d get up in the morning and drive to Swords or Tallaght, put all my money on a race that lasted nearly 30 seconds, jump in the car when the money was gone and drive back home.”

Football was the saving grace of his life. “Without sounding like an arsehole, I was still playing well – and have the footage to prove it,” he says. “Football kept me alive. I belonged there, and I could express myself there and was valued there, whereas outside I wasn’t worth anything. When I togged out I knew I was safe and that I didn’t need to gamble. No one was ringing looking for money. No one was giving me a tip for a horse I felt I had to back.”

Away from the pitch he was waking every night in a panic. “Imagine a square room with all the walls coming in,” he says. “I used to wake up at night thinking that was happening: that my whole world was coming crashing down. I didn’t sleep for three months towards the end.”

On his last day gambling McConville put €20,000 on a horse, lost it all, went to his car, scrabbled together €7 in loose change and went back in for another bet. “Can you imagine where you need to be at to do that?” he says. “Even to go in and face the woman behind the counter. I couldn’t hide it any more. Gambling had beat the shit out of me, and I had to hold out the white flag.”

When he went home he finally broke down and told his family what was going on. A week later he was sitting in front of the Cuan Mhuire treatment centre in Tipperary, about to commence a 13-week stint there. It was 2005. Armagh had just been beaten in the All-Ireland semi-final.

McConville began regaining the trust of his family and wrestling with his “shame and embarrassment”, not to mention his debts. At this point he thought he might owe €25,000, but the truth was that he hadn’t opened a letter or a bill in three years. “When we actually did the figures,” he says, the debt “was over €140,000”.

With the help of Gamblers Anonymous and his family, he hasn’t gambled since 2005. Nowadays he is married with two children. He works with people with learning difficulties and has trained as an addiction counsellor.

He has seen an increase in the number of younger people coming to Gamblers Anonymous and an increase in online gambling issues. “It needs to be policed better,” he says, although he believes that the most important solution is better education. He regularly speaks at schools about his experiences and now seems sadly amused by the behaviour of his younger self.

“When I talk to people I played football with they say, ‘You were a cocky, arrogant bastard,’ and I think, Jesus, that’s good, because that was what I wanted to portray.” In reality, he says, “I was an insecure little boy.”

This is one of a series of articles by Patrick Freyne on winners and losers in Ireland’s changing gambling world.