Family Fortunes: Men were a rare species on Achill in the 1950s 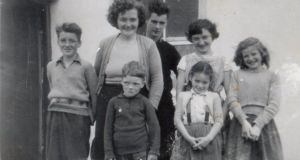 I had just returned to Kerry from a two-week residency in the Heinrich Boll Cottage on Achill when this photograph was posted on Facebook. The residency itself had been unusual for me because it was the first time I had visited Achill and not stayed in the family home.

This disengagement from family afforded me a fresh perspective on my birthplace, and I spent a lot of time with fellow writers and artists. Many of these were not native islanders and were curious about my experience of growing up there as well as the sociological and political ramifications of emigration. The picture brought me back to earth with a bang. This was no abstraction, no hypothesis, no pub talk. This was the real deal. The photo was posted by my cousin in Cleveland, another Michael Gallagher. It depicts my mother with my five siblings and me. I don’t remember the photograph being taken, but I guess it was about 1958 or 1959.

Family snaps were rare in those pre-smartphone days, and my mother obviously went to a lot of trouble to spruce us up for the occasion. Apart from my surprise at how young my mother looked, the most conspicuous feature is the absence of my father. This would be no surprise to islanders of my generation, but I was surprised during my visit at how few of the people I spoke to realised what a rare species men between the ages of 16 and 60 actually were on the Achill of that time. A similar story applied to women, except for those who married and settled down to look after meagre farms and copious children. Of my father’s siblings, one went to Scotland, one to Australia and five to America.

Some never came back. Emigration was – and still is – a necessary evil for those involved, not the opportunity that politicians make it out to be. Still, thank God for the Yanks and their box Brownies. We would love to receive your family memories, anecdotes, traditions, mishaps and triumphs.

Email 350 words and a relevant photograph if you have one to familyfortunes@irishtimes.com. A fee will be paid