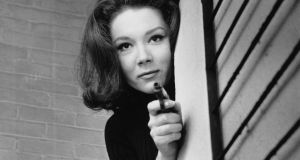 Diana Rigg, the British actor who enthralled London and New York theatre audiences with her performances in classic roles for more than half a century but remained best known as the quintessential new woman of the 1960s – sexy, confident, witty and karate-adept – on the television series The Avengers, died at her home in London on September 10th. She was 82.

Her daughter, Rachael Stirling, said in a statement that the cause was cancer.

Rigg had late-career success in a recurring role from 2013 to 2016 as the outspoken and demanding Lady Olenna Tyrell on HBO’s acclaimed series Game of Thrones. “I wonder if you’re the worst person I ever met,” Lady Olenna once said to her nemesis Cersei Lannister (Lena Headey). “At a certain age it’s hard to recall.”

But Rigg’s first and biggest taste of stardom came in 1965, when, as a 26-year-old veteran of the Royal Shakespeare Company, she was cast on the fourth season of ITV’s The Avengers.

As Emma Peel she was the stylish new crime-fighting partner of the dapper intelligence agent John Steed (Patrick Macnee), replacing Honor Blackman, who had left to star in the James Bond film Goldfinger. (Blackman died in April.)

Although Mrs. Peel, as Steed frequently addressed her, remained on the show relatively briefly, she quickly became the star attraction, especially when The Avengers was broadcast in the United States, beginning in 1966.

Reviewing the 1969 movie The Assassination Bureau, in which she starred, Vincent Canby of The New York Times described Rigg in her Emma Peel persona as a “tall, lithe Modigliani of a girl with the sweet sophistication of Nora Charles and the biceps of Barbarella”.

She had left the show by then for a luminous career in feature films. Her other roles included Helena in Peter Hall’s A Midsummer Night’s Dream (1968), Portia in an all-star version of Julius Caesar (1970), a free spirit who tempted George C. Scott in Arthur Hiller and Paddy Chayefsky’s satire The Hospital (1971), and the cheated-on wife in Harold Prince’s interpretation of the Stephen Sondheim musical A Little Night Music (1978).

But again it was for something of an action role that she received the greatest attention, when she played a crime boss’s daughter in On Her Majesty’s Secret Service (1969), the only James Bond film to star George Lazenby.

Her character had the distinction among Agent 007’s movie love interests of actually marrying Bond, but she was killed off in the final scene for the sake of future plot lines.

Her most notable British screen award was a 1990 best actress honour from Bafta, the British film and television academy, for Mother Love, a BBC mini-series in which she played a murderously possessive parent.

From 1967 to 2018 she was nominated for nine Emmy Awards, including four for Game of Thrones. She won in 1997 as best supporting actress in a mini-series or special for her role in a British-German production of Rebecca, based on the Daphne du Maurier novel. Mrs Peel had become Mrs Danvers.

Enid Diana Elizabeth Rigg was born on July 20, 1938, in Doncaster, Yorkshire, the daughter of a railroad engineer who soon moved his family to India for a job with the national railway. She returned to England when she was 8 to attend boarding school and remained in the country to complete her education.

Rigg entered the Royal Academy of Dramatic Art at 17, and made her professional debut two years later in 1957 in Brecht’s drama The Caucasian Chalk Circle. As a member of the Royal Shakespeare Company (1959-64), she began in minor parts and advanced to meatier ones, including Lady Macduff in Macbeth and Bianca in The Taming of the Shrew.

Rigg was made a Commander of the Order of the British Empire in 1988 and a Dame Commander in 1994.

Her marriages – to Menachem Gueffen, an Israeli artist (1973-76), and to Archibald Sterling, a Scottish businessman and theatre producer (1982-90) – ended in divorce. Her surviving daughter, Rachael, from her second marriage, is an actress. Rigg is also survived by a grandson.

In interviews Rigg was both philosophical and flexible about her career. She suggested in the 1970s that “it would have been death to have been labelled forever by that one TV series”, referring to The Avengers, then defended a return to television in the late 1990s with the thought that “being doomed to the classics is as limiting as doing a series for the rest of your life”.

But when she was appearing in Medea her love for the stage was evident. “It’s simply to do with an appetite now for really good work in the final third of my life,” she told the New York Times in 1994. “The theatre to me is home; in some curious way I don’t belong anywhere else.” – New York Times