Santa Montefiore likes to find exotic locations to set her romantic novels in. For her 13th book, it’s the west of Ireland 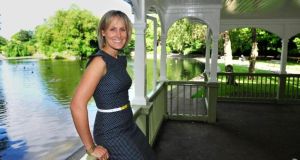 Santa Montefiore, who counts Kate Middleton and husband Simon Sebag Montefiore (the historian and writer) among her readers, is in Dublin for the release of her Connemara-set novel, The Secrets of the Lighthouse, which shot into the UK top-10 last weekend, something she finds surreal:“I feel like a usurper, not really meant to be there.”

Disarmingly modest, Montefiore (43) is tall and elegant, radiating wellbeing and contentment, something that perhaps comes from having a close-knit family.

She grew up on a farm in Hampshire with two siblings (her sister is Tara Palmer-Tomkinson, once dubbed “It” girl) living what she regards as an “idyllic Swallows and Amazons childhood”, but it was at boarding school that her love of writing really took hold and she began writing romances for friends.

In a sense her background provided perfect material for a burgeoning writer, because it contains duality: her father is English landowner and Olympic skier Charles Palmer-Tomkinson (a close friend of Prince Charles) and her mother, Patti Dawson, is Anglo-Argentine.

Argentina has always framed a huge part of Montefiore’s imagination, her first book (Meet Me Under the Ombu Tree), published in 2001, was set in the middle of the Argentine pampas, a place she knows well, having spent time there teaching English.

She has always been drawn to Latin cultures, feeling that it expresses her more “sensual” side, which she further explored by studying Spanish and Italian at Exeter University.

This sensuality is obvious in person – she is quick to laugh and is engaging company, talking animatedly about her travels, her children, inspirations and her husband, who she endearingly calls “Sebag”.

While he has become well known for his acclaimed books such as Stalin: The Court of the Red Tsar and Jerusalem: The Biography, Montefiore has steadily been carving out her own successes; she regularly features on bestseller lists and was nominated for Romantic Novel of the Year in 2010.

This, her 13th novel, brings together two women, Ellén Trawton and Caitlin Macausland, both in limbo: the latter particularly so, since she is a ghost, having recently died in tragic circumstances at an old, ruined lighthouse.

This lighthouse becomes a metaphor for unhappiness, something Montefiore has always been interested in. “Unhappiness drives you into your soul and songs or books or poetry that last come from somewhere very deep.

“ I remember in the film Dead Poets Society, when they are looking at pictures of dead people, and they remind us of our own mortality – those people thought they would go on forever.

“That does focus the mind on our mortality and what we are doing here; the transience of life. There is something so sad and bittersweet about that.”

Although most of Montefiore’s books are set in England, she is compelled to write about the “other”: Argentina, Chile, Italy. “The tone of the books set in places like France, Chile, and Italy were lighter, perhaps because they were based in serene nature, but for this one, I wanted something different.

“I thought of Connemara – wild, rugged and haunting – and the colours of the book represent those feelings very well. There is something very melancholic there and a deep soulfulness that I love and knew that I would write well.

“So I put on the Lord of the Rings soundtrack – this haunting, big, panoramic sound. And, as I started writing that first chapter, it was like it was coming through me. Caitlin’s voice just came very easily and it was very different to anything I had written before,” says Montefiore.

“I could just see the lighthouse and the ruins – it was really exciting. I think that some books are more inspired than others and this one felt like I didn’t have to work at it at all.

“I think the very nature of inspiration is being a channel for something; whether art, poetry or whatever it is you are doing.”

When Montefiore was younger, her mother was involved in a terrible accident and her father became unwell around the same time. She remembers running between the two bedsides, stepping into a more grown-up role. Later, when her godfather arranged for her to spend a year teaching English in Argentina, it seemed like a way of reconnecting to a more carefree self.

“It was very carefree. It was the best thing that ever happened to me. I was on my own, learning a new language, and I could be who I wanted to be.

“I remember opening my window the first morning and smelling jasmine and eucalyptus and hearing the gauchos in the distance. Without it would I have written all of these books? I don’t know. I think we are a sum of all our experiences.

“I met Joanna Trollope when I was in my early 20s, around the time I was writing Meet Me Under the Ombu Tree, and asked her advice. She said to put the book in a drawer until I had more experience at life.

“At the time, I was upset but I know now that she meant my experiences would make my books richer. Write about what you know. You do have to have connections and my heroines are different parts of me.”

Montefiore’s approach to writing is infused with this sense of experience and intuition. “I can intuit things. I found out later that my third book was essentially my friend’s story, though she had never told me anything about that part of her life at all. It happens quite a lot. For The French Gardener, I thought of a friend of my mother’s and picked up things from her life that I didn’t know. With Ireland, I picked up the energy of the landscape.”

This kind of psychic temperament is something Montefiore has always been aware of – as a child she says she saw ghosts – and has always believed in the power of nature, as a kind of guide.

“I have always felt very spiritually connected to nature. If I am unhappy I will go for a walk in the woods and feel connected to what it is all about, which is love really.

“In my 20s I was developed by a psychic, who became a great friend. We all have a psychic ability, we just have to learn to develop it.

“My new book is dedicated to Miguel and Nathalie, two friends of mine from Argentina. Nathalie died in an accident at 21 and Miguel died a few years ago of a brain tumour, and they have come through to me a few times together.

“A psychic can see in the way a dog can hear a dog-whistle and we can’t. It’s more than a belief. I feel that when we die we go home, we don’t become dust. We are here to learn.”

Montefiore’s literary influences are diverse, from Alexandre Dumas’ The Count of Monte Cristo – “the ending is bittersweet and sad, and makes you think” – to Mary Wesley and Eckhart Tolle to Daphne du Maurier – “so soulful, her books are haunting and definitely a massive influence”.

Gabriel Garcia Márquez features strongly: “He has been a huge influence on my Latin books: the almond trees, the lavender. There is a metaphor he uses at the end of Love in the Time of Cholera, where Fermina is older and he says her eyelashes have caught a touch of frost: what a beautiful way to describe getting older.”

Edith Wharton’s House of Mirth is a particular favourite: “Bertha, what a bitch! It was just so ghastly, and Lily doesn’t take help and you think, for God’s sake, just marry him, because you know what is going to happen if she doesn’t. She is going downhill, and in those days women were so dependent on a man to take care of them, and then you can be lost and what do you do? You don’t ever want to be dependent. I am so grateful I have a career where I am independent.”

“Sebag and I do bring out the best in each other. I wouldn’t have written if not for him and he might not have written books either, as he was a ladies’ man, always chasing girls, but now his home life is stable and sorted.

“We write in the same house, in separate offices and he helps me with plots. I think you have to be a team. Laughter is everything. Mr Darcy would have been so boring to live with – you don’t want to live with someone who is smouldering all the time.”

The Secrets of the Lighthouse is published by Simon & Schuster.

Tiny in the city, cosy in Blackrock: two to view this weekend
10