As the film of ‘Brooklyn’ gets good reviews, Tóibín’s status at home and abroad rises yet another notch Colm Toibin: ‘I was editor of Magill at 27. I wrote my first novel as a way of keeping the daily business of Garret Fitzgerald and Charlie Haughey and all those stories at bay.’ Photograph: Gareth Cattermole/Getty Images for BFI 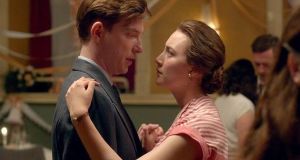 Dómhnaill Gleeson and Saoirse Ronan in the film Brooklyn

Colm Tóibín is not just famous; he has a public persona. The red-framed spectacles that hang round the writer’s neck are not quite so well known as those that perch above Brendan O’Carroll’s brow, but they have, nonetheless, become a signature prop. He has a great, imposing head on him: handsome in the style of Boris Karloff when playing the genial mad scientist. We recognise the fluid conversation that still retains occasional faltering traces of a childhood stammer.

He’s honed his shtick at a thousand literary festivals. But now Colm finds himself in touch with a different school of media pressure. John Crowley’s film of Tóibín’s Brooklyn – starring Saoirse Ronan as a Wexford girl adrift in 1950s New York – has received raves throughout the world and seems destined to register strongly in “awards season”. Nick Hornby adapted the novel, but the Colm is happy to be on board the Oscar junket.

“Ah, I lost the Booker Prize three times. So . . . ” he says with a weary laugh. “Look, this is to do with John and Saoirse and Nick and the rest of the team. I am just the guy who wrote the book. It’s actually a lovely feeling. I am lucky to be here at all.”

Tóibín seems enormously relaxed about the enterprise. Indeed, at several points in our conversation, when referencing incidents from the film, he wonders whether the scene was in the book or is Hornby’s invention.

“Nick said to me recently that, if you want some of those bits for a new edition of the book, then you can have them.”

Like DVD extras? “Yes, yes. We could put them in italics or something. Ha ha!”

What about the notion of Saoirse Ronan becoming the heroine? Does she elbow aside the character he originally imagined?

“When you finish a novel it is over for you,” he says. “It’s not yours any more. You just don’t think about that any more. Every reader who reads the book takes it over. But, yes, what’s Saoirse’s done with it has entered into my own consciousness. It’s important that an actress like Saoirse works with Irish directors and Irish material.”

Enniscorthy is another strong character in the film. Born 60 years ago in that Wexford town, Tóibín has often returned to its quiet corners in his fiction (even if the novels don’t always use the town’s name). It has popped up in such volumes as The Blackwater Lightship and The Heather Blazing. In Brooklyn, Eilis Lacey is overcome with an almost physical ache of homesickness when she leaves the town for New York.

I wonder how he is received in his old manor. The books do not eviscerate the place, but they deal with the tension, rivalries and claustrophobia that often characterises such towns. “I think that’s been the great change in the country, really,” he says merrily. “If you compare it with Edna O’Brien, John McGahern or John Broderick. Think of the reception they got.”

They were seen to have shamed the hometown? “Yeah. Or even Kate O’Brien. It was made clear to me right from the beginning that there would never be any problem like that. From the family or the wider town. People were absolutely ready. Something new had happened with writers and readers.”

Tóibín has, in previous interviews, hinted at all sorts of complications in his upbringing. He confirms that he couldn’t really read until he was nine and didn’t become a serious consumer of books until well into adolescence. He did have a decent English teacher but, unlike so many writers, he can’t name a children’s book that turned him on to literature.

“I wrote some poetry. I think I wanted to be a poet. But that didn’t work out.”

I make a noise. “I don’t know what you’re laughing about,” he says as he allows his brow to furrow in mock (I think) fury.

Colm’s father died when the boy was just 12 and he has never denied the influence that emotional jolt had on his later writing. There are psychological hollows in many corners of his narratives. There is often a sense that characters are compensating for an early loss.

“I didn’t think about it for a long time,” he says. “Then it came up when I did therapy with [psychiatrist] Ivor Browne. I otherwise wouldn’t have thought about it. You get on with things and then these things come after you. If you are a novelist you are alert to the things you come back to. How come there’s no father in Brooklyn?”

He positively chortles as he recalls encountering another such absence in a work under development.

“I thought: oh my god, here we come again. I honestly wasn’t thinking about it. I had 20,000 words. I read it over again and thought: you are really one sad fuck. Ha ha!”

Brooklyn is a story about emigration. Both the novel and the film do a wonderful job of balancing the terrors and attractions of the foreign pavement. Coming of age in the early 1970s, a graduate of UCD, Tóibín sounds like just the sort of fellow who would have fled the country during its grimmest years. Sure enough, he spent three years in Barcelona after college and was sufficiently seduced by the place to set his first novel, The South, among those streets. But, crucially, unlike so many of his generation, Tóibín came home to become a hugely influential journalist.

He gives me a baffled look when I make the point, but soon engages.

“I became features editor of In Dublin in 1981 with Fintan O’Toole, Michael Dervan, Michael Dwyer, Aidan Dunne and Mary Raftery to choose from,” he says. “Ha ha! You don’t get that again. We all stayed friends. That was an amazing opportunity. It was broken up by Vincent Browne. He brought Fintan into the Tribune and me into Magill. You [The Irish Times] took the other guys and Mary went into RTÉ. I was editor of Magill at 27. I wrote my first novel as a way of keeping the daily business of Garret Fitzgerald and Charlie Haughey and all those stories at bay.”

In any other country it would seem like a silly question, but it’s worth asking what kept that generation of influential journalists from leaving. They were still young. This was a grubby time for the nation. The state still regarded gay men such as Tóibín as potential criminals. So many of their bright contemporaries were getting on the boat and making for Soho (aspiring writers really did still travel by boat in those days).

“I think by writing these stories and by having students and so on reading them, we all got rooted here,” he says. “The notion of going to London and starting again without that intimacy of readership? Nobody would have the stomach for it. You would have lost two important years. We didn’t say: ‘There is no room for us.’ We made room. Everyone was too busy. But you’re absolutely right, it’s interesting that nobody emigrated from that group.”

Looking back, that cadre does look to have been among those who kept the nation safe for liberal Bohemia. Pieces by Tóibín and the gang played to an audience – largely ignored in other media – who were interested in Werner Herzog, Milan Kundera, The Fall and all that juicy stuff “over there”. I hope that Young People Today appreciate them keeping the spirit alive.

“Dublin has always had a Bohemian thing,” he says. “Even in the ‘dark’ 1950s there was a world where that was going on. We didn’t think about it until we did think about it. There is a possibility of change. But we thought journalism was the way, rather than politics. Nobody thought of joining a political party.”

Tóibín’s rise to his current elevated status was gradual. There was no one smash novel that kicked him into the academy. The Blackwater Lightship from 1999 was nominated for the Booker and was turned into a very decent TV movie with Angela Lansbury and Gina McKee. The Master, a study of Henry James, won the famously lucrative International Impac Dublin Literary Award. Slowly he acquired status and accumulated comforts.

He still writes every day with a near religious rigour. As we meet, it is less than 12 hours since an early morning arrival from New York. “I finish everything I start,” he says. “I am disciplined that way. I wrote today. I came in at 4.30. I was in bed at five. I got up at 11. I washed myself and all that and I wrote 300 words.”

The discipline has paid off. Tóibín now teaches at prestigious colleges throughout the world. (He smiles at the fact that students in Columbia University address him as “professor” when they encounter him in the street.) He’s been on the Booker shortlist three times. The Broadway production of his novel The Testament of Mary received three Tony Award nominations.

He is now a member of the establishment. It may be worse than that. He might now be a national treasure. “Ah! You work on your own a lot where these things rarely impinge,” he says. “I know what you mean. But you live in the shadows. If you are in the light sometimes, you just blink.”