Obituary: The librarian and mother of two was a committed and generous volunteer 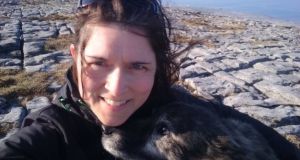 Catríona Lucas: June 18th, 1975-September 12th, 2016. Her family remember above all her warmth, her laughter, and her generosity as a devoted mother, wife, sister, daughter, neighbour and friend

Caitríona Rós Lucas (41) was an active and highly qualified member of one of the busiest Irish Coast Guard units in the country at Doolin, Co Clare. Earlier this month the librarian and mother-of-two became the first member of the Irish Coast Guard to die on active service when her boat capsized while out searching for a missing man off the coast of Kilkee.

Caitríona Lucas (Née Deely) was the first member of the unit to volunteer for the mission and her husband, Bernard, says that any time the pager went on she responded immediately. “She never refused to help others.”

A native of Ballyvaughan, in north Clare, Caitríona Lucas joined the unit in March 2006 and served there along with her husband and 34 others.

She gave 700 hours of her time every year to the unit, and during her 10 years with it built up many skills and qualifications that underlined her commitment. Climbing instructor, first aid, boat coxswain, leadership in voluntary emergency service, initial response management, search skills instructor, applied suicide intervention training, offshore emergency care and navigation and stability were among the many disciplines she mastered.

She was also a member of the Search and Rescue Dog Association (SARDA). She served as its national secretary for three years, and, along with her husband, responded to call-outs that could last all night, before she would return home to face a day’s work.

She was educated at Ballyvaughan National School and the Mary Immaculate Convent of Mercy Secondary School in Lisdoonvarna. According to her older sister, Bríd, growing up in the Burren gave her “a deep appreciation of wildlife and nature”, which was also fostered by her parents Tom and Mary.

At school she showed a talent for art, and went on to study art at Sligo IT. She was considered to have a distinctive style of painting and drawing, particularly when depicting animals.

She later worked at the Aillwee Caves near Ballyvaughan and in retail before becoming a librarian with Clare Co Council 16 years ago.

In her work at Ennistymon, Lisdoonvarna and Corofin libraries, she was able to bring what Liscannor parish priest Fr Denis Crosby told mourners at her funeral Mass was her “playful, creative spirit” to produce popular and special projects for the children who attended the libraries.

Numbers had to be capped for her Lego club there, such was its popularity, while she painted Roald Dahl figures on the windows of Ennistymon library and made figures of Dahl’s best known characters for a planned celebration of the Roald Dahl 100th anniversary.

At the library, her work went beyond lending out books and putting on special projects for children. She is remembered for her empathy, understanding and her sympathetic ear for those who visited the library.

She was also able to use her talent for art in her role as education officer with the Doolin Coast Guard unit by making models of the unit’s rescue boats and paintings of the Shannon Coast Guard helicopter and Doolin rescue boat.

At the time of her death, she was studying for a Bachelor of Science in information and library studies in Aberystwyth University, Wales, a course she had been due to finish in 2017.

Since her death, her life of giving, both through her voluntary work and her work in the local library, has been the subject of glowing tributes both locally and nationally. But her family remember above all her warmth, her laughter, and her generosity as a devoted mother, wife, sister, daughter, neighbour and friend. Her sister Bríd says that family always came first. “Bernard was her soulmate . . . Her children Ben and Emma were her pride and joy. She was mother and friend to them, supporting and guiding them but always allowing them to be their own person and make their own choices.”

Her husband recalls, “No problem or challenge was too big for her to overcome and she always knew what to say to other people to comfort them.”

Caitríona Lucas is survived by her husband Bernard, son Ben and daughter Emma, as well as her parents Tom and Mary, her brothers Pádraig and Colm, and sister Bríd.