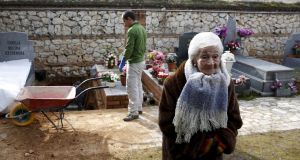 Ascensión Mendieta at the cemetery in Spain where her father’s remains were exhumed. She spent her life searching for him. Photograph: Juan Medina/Reuters

Ascensión Mendieta was just 13 in 1939 when her father was lined up against a wall in Spain and shot by a firing squad of soldiers loyal to Gen Francisco Franco. His body was then dumped into a mass grave.

Ascensión would devote her entire life to finding her father and giving him a proper burial. Only recently, at age 92, did she fulfil that ambition.

After decades of agony and searching, she located him in 2017, in the cemetery at Guadalajara. She had his remains exhumed and buried him in Madrid at a ceremony attended by hundreds of mourners.

“Now I can rest in peace,” she said at the time.

On September 16th, Mendieta died in Madrid at 93, her family reported on social media. Her last wish was carried out when her own coffin was placed in the same tomb as her father and she was buried with him.

She had come to personify the struggle for justice shared by the families of perhaps as many as 200,000 victims of Franco-era executions, whose bodies were tossed in unmarked graves or along the side of roadways throughout Spain.

Her simple demand for justice made Mendieta, a modest small-town woman who did not seek the spotlight, a hero to many.

As the BBC reported: “This most personal of struggles had inadvertently made humble Ascensión into a public figure in her final years. She bore her celebrity status with smiling bewilderment, but she always had a crystal-clear view on the injustice her family and thousands more had to stomach during the Franco regime and the failure of the modern Spanish state to come to terms with the country’s bloody legacy.”

Ascensión Mendieta Ibarra was born on November 29th, 1925, and grew up in Sacédon, east of Madrid, with six siblings. As a teenager she worked as a seamstress. She eventually had four children. Complete information on survivors was not immediately available.

Her mother, Maria Ibarra, raised the children while her father, Timoteo Mendieta Alcala, was the village butcher in Sacédon, in the province of Guadalajara. More important, he was an officer of the General Workers’ Union, a socialist union, which made him a target for Franco.

Ascensión was 13 when a group of men came to the door looking for her father. She thought they were “well spoken” and let them in.

Family members were not allowed to visit the mass grave where they believed he had been tossed. They were left to throw flowers over the cemetery wall

He was taken and shot against the wall of a Guadalajara cemetery on November 16th, 1939. His body was dumped in a mass grave there, along with those of more than 20 others; more than 800 others who had been executed would eventually fill the pits in the cemetery.

After Franco’s death in 1975, Mendieta and other relatives petitioned the Spanish government for help in locating his remains. The authorities refused to help.

Family members were not allowed to visit the mass grave where they believed he had been tossed. They were left to throw flowers over the cemetery wall.

In 2010, a group of victims’ families, together with prominent humanitarian organisations, filed a lawsuit in Argentina seeking an investigation into Franco’s crimes against humanity. A judge there, María Romilda Servini de Cubría, had begun an investigation and was compiling a growing file of people seeking help in finding relatives who had been executed.

In 2013, at age 88, Mendieta flew to Argentina to add her case to the file. The judge proceeded under a legal principle called universal jurisdiction, in which a court in one country can sometimes prosecute someone elsewhere for crimes believed to have harmed the world. She eventually gained the co-operation of a Spanish judge, who complied with her request to dig up some of the graves. (The lawsuit was the subject of a 2018 documentary, The Silence of Others.)

A team of archaeologists and volunteers from the Association for the Recovery of Historical Memory, a human rights group that in 2000 uncovered the first mass grave of Franco victims, undertook the exhumation, with no financial support from the Spanish government. After two unsuccessful attempts, they found Timoteo Mendieta Alcala’s remains in 2017 in what was called Pit Number 1 of the cemetery.

The unearthing of those remains marked the first time a Franco-era victim’s body had been recovered through the courts, according to the BBC. The next year, the Association for the Recovery of Historical Memory delivered to families the identified remains of nearly two dozen others who had been executed in 1939 and dumped in that same cemetery.

Mendieta buried her father in a nonreligious ceremony in the Madrid Civil Cemetery and became the symbol of the decades-long campaign to seek justice and recover the bodies of loved ones slaughtered by Franco’s fascist troops.

“If it wasn’t for that judge in Argentina, we would never have found him,” she said at the time. “In Spain, no one has done a thing for the dead.”