Aodhán Ó Ríordáin: How Ireland can take a stand in the Trump era 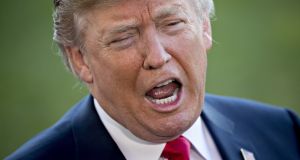 US president Donald Trump speaks to members of the media at the White House in Washington, DC. File photograph: Andrew Harrer/Bloomberg

It’s almost a year since the world felt a little colder, a little less caring and a little less recognisable. For some the election of Donald Trump as the most powerful man on the planet was unthinkable. Unthinkable because all the normal rules of political engagement had determined him to be completely ineligible to hold high office.

It was unthinkable because we always assumed democracy would weed out the deserving from the undeserving, the substantive from the shallow, especially when the evidence was so patently obvious it was screaming into the faces of America.

Trump had run the most dishonest, deliberately offensive, racist, divisive campaign in modern history. He openly mocked a disabled reporter, he was caught bragging about sexual assault and he threatened to ban an entire religion from entering the country. And he won. And the world was speechless.

Ireland was speechless. And Ireland recognised some of the names that surrounded him. Bannon. Conway. Kelly. Ryan. McConnell. Flynn. His vice-president has Irish-born grandparents.

How was it that the Irish, who once were on the bottom of the immigrant ladder, were now lining up as foot-soldiers in the most overtly xenophobic administration in recent memory? How had the descendants of the Irish forgotten that we are an immigrant nation? That the negative stereotypes now labelled on Mexicans were once labelled on us? That the Irish once sailed in coffin ships akin to those in the Mediterranean today? That the lack of tolerance for Islam was similar to the sectarian obstacles the Irish overcame in decades past? Weren’t we once called the terrorists?

Last St Patrick’s Day, a group of individuals of common mind from different sides of the Atlantic under the working title of Irish Stand packed out the iconic Riverside Church in New York City for an event that raised more than $20,000 for the American Civil Liberties Union.

It was a statement that the Irish haven’t forgotten their own past and feel a deep and profound responsibility to stand with those who walk the path once walked by our ancestors. The path of suspicion, of misunderstanding, of victimisation. We know that road.

We are the immigrants. We are the undocumented. We are the ones who winced at the signs that once read: “No Irish need apply.” On that emotional New York night, Max Kennedy, the son of Senator Robert Kennedy, raised the roof with his defiant refrain: “We still stand.”

A year on from the American election and we’re finding our voice again. And we’re using it to empower some of the most vulnerable people in Irish society while reminding the world that we do indeed still stand.

The Irish Refugee Council works with young people in direct provision to advocate for change to a system that is crying out for radical reform.

On Wednesday November 8th, the anniversary of Trump’s election, in Liberty Hall Theatre, Dublin, the Irish Stand campaign will take to the stage once again and speak for justice and equality while raising funds for the Irish Refugee Council’s direct provision youth programme.

Performers will include Mary Coughlan, Panti Bliss, David O’Doherty, Frances Black and a host of other speakers and activists from different backgrounds and perspectives but with one unifying characteristic – a determination to be heard and to take a stand.

We will hear from Terry McGovern, a New Yorker whose mother was killed on September 11th, 2001, in the World Trade Centre attacks, but who refuses to let her death be a rallying call for hate.

We will hear from Razan Ibraheem, a Syrian journalist based in Dublin whose heart is breaking for her homeland. We will hear from Dil Wickremasinghe, whose Newstalk show was cancelled days after she protested about the George Hook controversy.

Ireland can be a gift to the world in these troubled times. We can remind the men and women of influence in the most powerful building on Earth that our history has been tough but we have learned lessons from it.

We still face many struggles for equality here at home, but while we argue them over and back we will never sink to the depths of electing a hatemonger like Donald J Trump.

No Irish political party has ever played the race card for electoral gain and we should take some pride in that.

We have a story to remind our American cousins of, and solidarity to show to our brothers and sisters lodged in a dehumanising Irish asylum process for far too long.

The price of a ticket to Irish Stand is the weekly rate for a resident in direct provision. The fact that it is only €21.60 should be enough to convince you to join us.