A night in Doonbeg: Trump's world of fake designer bags, Nescafé and knickers 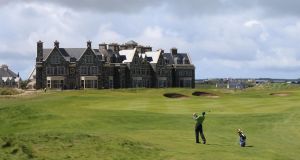 ‘In the bar I hear people talking about You Know Who, and their views on his pending Presidency. I’ll just say they’re not complimentary, and leave it at that’ 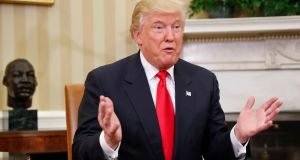 US president-elect Donald Trump speaks to members of the media during his meeting with President Barack Obama in the Oval Office on November 10th. Photograph: Pablo Martinez Monsivais/AP Photo

My surreal experiences in Trump Terrain begin before I even leave the office. I have just made an online booking for the cheapest room at Trump International Golf Links and Hotel at Doombeg, sorry Doonbeg, which turns out to be a whopping €190.

My inbox chirps a couple of minutes later. “Dear Terina,” the email trills.

Terina? I am bewildered. Terina is nothing like Rosita. The email is definitely for me, though: it has all the details of my booking. Then I wonder if I’ve been T’d Up. Is everyone who stays in a Trump property rechristened with a name that starts with T? But why Terina? Why not Tosita? I have a happy few moments renaming – or rather, rebranding – some of the colleagues who sit near me. Tintan O’Toole. Tatrick Teyne. Tóisín Tingle.

Over the following days, I have various additional correspondence from Trump International. I am their new best friend. I am invited to sign up for a “Trump Card” so I can join the “Trump lifestyle”.

Among the many “exclusive privileges” on offer is something described as “24-hour access to signature Trump Attaché service.” I could also avail of “two complimentary nights earned after the 20th stay.” I don’t reply to any of them. I doubt expenses for 20 nights at Trump International would go down well at The Irish Times.

On the appointed day, I drive west to Clare, with the radio on. The owner of Doonbeg is in the news again, as he has been every day for months. The story today is that Trump Tower in Manhattan, where Trump lives among his gilded doors and golden toilets, has mysteriously been rechristened Dump Tower by Google Maps. The newsreader can barely get the words out. He can’t laugh on air, but oh my, how I howl in the car.

As it happens, this will not be my first visit to the Doonbeg property. Some years ago, when many hotels were going into Nama, myself and Tatrick Teyne went around the country, visiting a number of high-profile hotels to interview their managers about how they were surviving. Barely a week after the story ran, both the hotels I had visited went into receivership. One of them was Doonbeg, which was subsequently bought for €15 million by, as we all know now, You Know Who.

Although I was shown around on that occasion, I did not stay. I did see, however, the suites and cottages and large public rooms overlooking the Atlantic, all very new, made to look very old. There is a golf links there too, designed by Australian golfer and two-time winner of the British Open Greg Norman – but as I have no interest in golf.

When I arrive at Trump International, I am startled to see the place ablaze with lights: floodlights, carnival lights, car lights. I had not expected much activity on a winter’s Sunday evening in rural Ireland, but there are dozens of cars passing me in both directions on the long avenue.

It’s the last half hour of the Doonbeg Christmas Market, which started on Friday, and has been running all weekend. There are many stalls in the forecourt of the hotel; an area I walk through after parking, on my way to check in. I love a good market, and start to have a look around. After a few minutes, I realise that several stalls are selling identical designer bags, sweatshirts and hoodies.

I pick up the smallest Michael Kors-branded bag I can find. “How much is this?” The stall owner doesn’t miss a beat. “€15, but the same bag is €170 in Brown Thomas.”

The day when the family home of the next president of the US has been publicly rechristened Dump Tower is not a day for mincing one’s language. “Are they fakes?” I ask bluntly.

“They’re replicas,” is the answer.

There are scores of fake Michael Kors bags, wallets, Hollister and Superdry T-shirts, sweatshirts and hoodies on sale at the Doonbeg Christmas Market. A black economy is being conducted on the doorstep of the hotel itself; a hotel owned by a man who professes he will Make America Great Again by stopping the outsourcing of jobs to other countries, especially to countries where they make products more cheaply. I wonder what American-born Michael Kors would have to say about the replicas being sold in his name, on property owned by You Know Who. Last year, the Irish Small and Medium Enterprises Association estimated the black economy in Ireland is now valued at €25 billion, not a cent of which goes to the State.

As I meditate on this, I spot two gardaí. They are not examining the fake merchandise on sale at the Doonbeg Christmas Market, literally under their noses: they are getting their picture taken with Santa. At this point, I find myself wondering whether the gardaí are fakes too. I am so bamboozled by what has elapsed in the past 10 minutes that I foolishly let pass the opportunity to take my own picture of the guards with Santa. It would have been such a festive image to tweet to You Know Who.

My accommodation, 178D, is 1km away from the main hotel building; one of four rooms in an attached house. My room is perfectly fine, even if I do feel like I’m in a suburban housing estate in the middle of a golf links. I note that no opportunity is lost to brand as many objects as possible with the Trump name. It’s on everything from the bathrobe in the bathroom (which has no bath, despite costing €190 a night), to the list of laundry services (€5 to launder a pair of underpants). Yet the only coffee on offer is instant Nescafé. The “Trump Wellness” (there’s two words I never thought I’d see together) card I’ve been given at reception informs me that I can have kettlebells and weights delivered to my room, should I not want to “miss a beat” from my “workout schedule”.

The Ocean Restaurant is closed, but I have an excellent, very expensive martini (€16, plus 15 per cent service charge and VAT) at Trump’s Bar. At a nearby table, I actually hear people talking about You Know Who, and their views on his pending presidency. I’ll just say they’re not complimentary.

The following morning I walk the grounds. The steel-grey Atlantic is stark and beautiful at the edge of the dunes. There is one last surprise: Trump Time. In a field outside the hotel, emblazoned in big gold letters with the words “Trump Doonbeg”, is a giant, top-heavy, four-sided clock. Time to leave.