We’ve scanned the land for the hottest young talent making waves in the worlds of business, fashion, food, sport, activism, art, design, film, TV, tech, media and music. Here we talk to a few of those men and women. 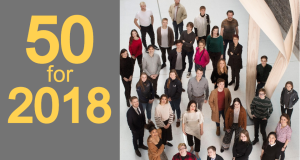 Nikki Lannen, War Ducks
Virtual reality may still be taking hold with consumers, but for Nikki Lannen, founder and head of War Ducks, embracing the technology is paying off. The former Facebook employee struck out on her own in 2013 after more than four years on the social network’s gaming team, setting up War Ducks to design and develop games for virtual reality devices. The Dublin-based company has been busy in recent months, announcing in September it had raised €1.3 million to help expand its platform and add to its staff numbers. On the agenda for the coming months is expanding its popular Sneaky Bears series to Japan and China. There are also plans for a new series of games. Virtual reality may have yet to hit its stride, but when it does War Ducks plans to be along for the ride.

Jason McKeown and Paul McGeoch, Neurovalens
The weight-loss market is a multimillion dollar global industry, as increasingly sedentary lifestyles and changing diets mean average waistlines in the western world are expanding. But Belfast-based Neurovalens, set up by Dr Jason McKeown and neuroscientist Paul McGeoch, is hoping to reverse that trend with a simple headband. The product, Modius, uses a non-invasive method of neurostimulation that taps into a nerve that runs directly to the brain’s control centre for fat storage, metabolism rates and appetite. The premise is simple: wear it for an hour a day and potentially “reset” yourself. The first bands have already been shipped to customers, early backers through an Indiegogo campaign who are providing feedback to the company through an online community. That campaign raised $1.8 million. The company has also been running a trial in the US with TV show Doctors, following users of the band. McKeown sees Modius as the first generation of “careable technology”, rather than the wearables that have dominated health tech up until now.

1 Covid-19: Cabinet looks to tighten travel restrictions and decide on pubs reopening
2 ‘There was a time when I hated being a mother – I would have gladly walked away’
3 Five Covid-19 clusters found among Irish fruit and vegetable growers
4 David Trimble: After the big dinner in Oslo, somebody said why don’t we party together?
5 Dún Laoghaire home of renowned acting mentor Betty Ann Norton for €1.5m
6 Seamus Mallon: I saw John Hume’s raw courage as he faced troop of bloodthirsty Paras
7 Fintan O’Toole: Supreme Court has called time on government waffle
8 More than 40% of help-to-buy recipients already had deposit
9 Cholesterol-lowering drugs may not have much benefit, review finds
10 Trump criticises Covid lockdowns and falsely claims US ‘doing very well’
11 Ethics watchdog backs staff called ‘lazy’ by FF’s Marc MacSharry
12 Shots in the Dark: A portrait of Britain as a struggling team
13 Coronavirus experience shows how Greece’s weakness is its sunshine
14 Fine Gael Senator is threatened with violence on social media following canvassing post
15 Tributes to John Hume flood in from Irish and international politicians
16 Gerry Thornley: Irish system to face its acid test in front-loaded return
17 Coronavirus: Warning against blame game as 46 more cases are confirmed
18 Why are there so many angry dads?
19 ‘I’ve had my butt kicked for the past three years’: Jamie Oliver on fame and failure
20 Shelbourne statues row a missed chance to debate decolonisation of public heritage
21 Owner of Dundrum Town Centre to sell prized assets
22 Tony Blair: John Hume was a visionary titan who helped shape my politics
23 Netflix: 10 of the best new shows and films to watch in August
24 John Hume obituary: Nationalist leader who championed ‘agreed Ireland’
25 Elderly parents living in property you own will save you on capital gains tax
26 Different Strokes: Bryson DeChambeau’s rules debates doing him no favours
27 Fathers, sons and soccer: Reflections on the family business
28 Social worker overcomes poverty to graduate with master’s degree
29 Murder investigation launched following discovery of woman’s body
30 Two people die after car plunges off road and overturns in river
31 Most workers now expect ability to work from home part-time
32 ‘Somalis are the Irish of Africa’: Irish man helps rebuild Somalia’s rule of law
33 John Hume, architect of peace process, dies aged 83
34 Australian state to deploy military, impose hefty fines to enforce Covid-19 isolation
35 Nine arrested following ‘shocking’ antisocial behaviour in Kilkee
36 DUP’s Brexit ads: Who bankrolled the secretive £435,000 campaign?
37 Deadly virus should be treated like Covid-19 for hare population, junior minister says
38 24 hours in Bundoran: ‘The town is mental. No one expected it to be so busy’
39 Portuguese police disperse groups of young Irish holidaymakers
40 Maureen Dowd: The US president and the damage done
Real news has value SUBSCRIBE